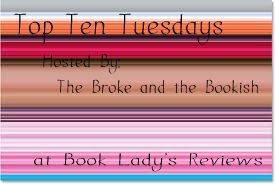 Time for Top Ten Tuesday #3 which is hosted by The Broke and the Bookish.This week's theme is "Top Ten Books I thought I'd like less/more."

*Beautiful Creatures By Kami Garcia and Margaret Stohl
I really tried to like this book...but the story still confuses me and leaves me uninterested.I just couldn't and still can't understand what all that hype is about.And there are some very uncomfortable and a bit desperate moments where I'm just like...What am I missing?

*Scarlet By Marissa Meyer
I know it's a bit weird.I mean this book being one of those I thought I'd like more since it was one if not the most top anticipated books of 2013.I was literally dying to read this book.I'm not saying that it wasn't good,just that I thought it would be more fascinating and interesting and all that.

*The Pledge By Kimberly Derting
The story was really unique.It was something different and I liked that....I liked this book but I felt that it was a bit slow.It wasn't bad,I just thought that I'd like it more.(My Review)

*Shatter Me By Tahereh Mafi
I always had my doubts about this book and I literally saw it in the same spot every single time when I went to the bookstore.And none of those times did I pick it up.But then I decided to finally buy it.And I'm so glad I did.I was so emotional while reading this book.I loved the writing style and of course the characters.I even highlighted things in it.And I neved do that.

*Mercedes Thompson Series By Patricia Briggs
I read The Alpha and Omega Series first even though the events happen after what happens in Moon Called which is the first book of the Mercy Thompson Series.I wasn't really impressed and at the beginning,I wasn't sure if I'd like Mercy and her story but I ended up falling in love with her and all the other characters.It's become on of my favorite books.(My Review)

*Throne of Glass By Sarah J. Maas
When I picked it up...I had no idea what it was about.I heard so many people talking about it but never actually bothered to check it out.Now,I'm something more than obsessed with this book.(My Review)

*Lola and the Boy Next Door By Stephanie Perkins
I heard so many things about Anna and the French Kiss and I was desperate to read it.But I couldn't find it and picked up Lola's story instead.I didn't think I would love this book so much.It captured my interest and I couldn't put it down.(My Review )

*Warriors of Ankh Series By Samantha Young
My partner chose this for me at a challenge on GoodReads.I had the series sitting there for a while but wasn't that eager to pick it up.Then I started reading it and I literally read the whole series in less than a week.The whole thing was insane.I couldn't put the freaking books down.And then when the trilogy ended....I was heartbroken.(My Review)

*Chicagoland Vampires By Chloe Neill
I'll only say one thing...What did you expect???(My Review)