Hello guys and welcome to the promotional post for Maggie Wild's new novel, Simply You! Make sure to get a glimpse of the book itself  through the excerpt attached and enter the Giveaway at the very end of the page! 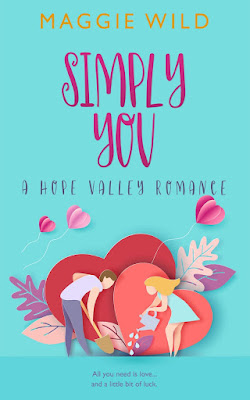 She needs someone she can count on. He’s gun-shy after being hurt. Can a brush with fate in a rained-out English village turn into enduring love?
Sarah Tildon thinks she’s found the perfect man. But after her overbearing future mother-in-law insists her quiet country wedding become a high-society shindig, she sets out on a two-week ride to rethink her plans. Stranded when her bicycle is stolen in a picturesque hamlet, she’s touched by the kindness of a handsome young farmer who comes to her rescue.
The big city failed Michael Marsden’s ample ambitions. After his fiancée cheats on him, he turns his back on the hustle and bustle and takes on a farm to prove he can lead a self-sufficient life. And taken by surprise when a charming outsider helps sing his hens into laying, he realizes his newfound Eden is missing its Eve.
Unexpectedly falling for the sweet homesteader, Sarah is torn between the security of a gilded cage and the precarious freedom of raising chickens. And when her fiancé arrives to bring her back to London, Michael fears she’ll leave him with yet another shattered heart.
Will this unlikely couple throw caution to the wind and embrace a destined second chance?
Simply You is the first book in the heartwarming Hope Valley Romance series. If you like fun heroines, pastoral backdrops, and endearing courtships, then you’ll adore Maggie Wild’s sweet tale.
{Amazon | B&N | iBooks | Kobo | Google Play}

Sarah lay on her back in the center of the stone circle, her whole body softened by the beers they’d drunk. Beside her, Michael plucked at the grass. The wavering sound of music drifted up from the village, ebbing and flowing as the wind carried the sound toward them. In the lulls, the silence lapped over them, interrupted by the occasional twittering of a bird heading in for the evening. Sarah gazed out across the moors fading now into the late pink glow of evening. She loved the way the light changed as the day went on, highlighting the colors of the heather, the trees, the grass. Maybe before she left she would come up here in the early morning, watch the sun rise over the village. Maybe Michael would come with her.

For the first time in a long time, Sarah felt alive. Away from the confines of Amir’s family and the expectations of her behavior, she could be herself and she was surprised to find that who she was wasn’t who she’d expected. She liked this Sarah.

She played back the events of the evening, relishing again the simple joy of the evening spent with Michael and his family. She pictured Nicki with her hair stuck to her face from hours of non-stop dancing, the smear of dirt on Kate’s cheek where she’d taken a tumble in the sack race. She tried to imagine Claudette climbing into an old potato sack and jumping down the length of a field for fun. Claudette and fun weren’t two things that often went together.

She thought then about flying through the air with Madison and George. That was the thing that was sticking in her chest. In the future life she’d so carefully mapped out, would she ever ride a fairground ride with her children and laugh like she’d laughed tonight? Would Amir ever take her by the hand and give her a piggy back up to a stone circle at the top of a hill? So much about her life with Amir was safe and comfortable, what she’d thought she always wanted. But tonight she had felt the opposite, free and a little reckless, but instead of scaring her, it had felt good.

Could I live this life? she thought. This unstable, scary, wonderful life?

Michael had been quiet for a while and she turned to see if he was mesmerized by the light too. But he wasn’t. He was hunched over, working intently on something in his hands.

“What are you doing?” she asked.

He didn’t respond at first and she wondered if he’d heard her, then he looked up and smiled. It was such a lovely boyish grin and it made her tickle inside.

“I made you a present,” he said, then suddenly looked coy. He held out the thing he’d been so focused on and she saw it was a long thin loop: a daisy chain. She laughed and Michael

seemed suddenly embarrassed. He started to put it down, but she leaned forward, ducking her head.

He smiled again and it filled his entire face. She felt the glow of it transmit into her. He leaned in and placed the necklace of flowers around her neck. She arranged it so it fell neatly down the front of her dress. When she looked back up he hadn’t moved. His face was inches from hers and before she could stop herself, she leaned in and kissed him.

Maggie Wild lives in California Wine Country with her own Mr. Right and a small collection of furry friends. A native of Yorkshire, England, she returns “home” every day through her fictional worlds. When not writing her fun, contemporary romance stories, she loves to watch the birds in her garden and hike through the local redwoods.

a Rafflecopter giveaway
Posted by Book Lady's Reviews at 14:14