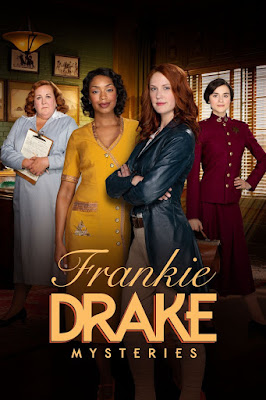 Hello bookworms and welcome to a new Blog Series I've been wanting to start sharing for a while now! Like most book lovers, I love watching stuff as well and I've been wanting to start reviewing TV Show and Movies in this blog for a while now! That, of course, doesn't mean that it'll stop being book oriented! I love watching movies and series -something I've been doing a lot lately since I've been incredibly sick- and have decided to start incorporating more posts that have to do with them here! They might include spoilers, but I'm going to try and keep them as neutral as possible! I'm also trying to put together some book and movie adaptation comparisons, which will be coming soon! Let me know what you think about this in the comment section below and a TV Show or a Movie you'd like to hear my thoughts on!

For today's post, we're going to be discussing a favorite of mine, Frankie Drake Mysteries! I was thinking about starting this with Murdoch Mysteries but, I'm currently reading the books so, I feel like it will be more interesting to do a comparison on it, as soon as I finish!

Let's take things from the beginning and start with a little background on today's chosen TV Show!

🔍It premiered on CBC Television on November 6th of 2017 and has since been renewed for a second season, which consists of 10 episodes and aired its last one of the season, in the last week of November, 2018!

🔍It was also written and produced by Carol Hay and Michelle Ricci, who had also worked on Murdoch Mysteries, a series that will be featured in a post soon!

🔍Why Frankie Drake Mysteries, is worth Watching!

*It portrays quite a realistic representation of the era in which it is set and delves deep into very important topics that -unfortunately- reflect on today's society, approximately a century later!

*It has a brilliant setting, an interesting plot and some kick ass characters, which is why it's more than worth watching! Frankie, Trudy, Mary and Flo are intelligent, empowering, fearless and brave! I love their dynamic and I'm more than sure that you'll love it too!

* Topics such as hysteria, racism, inequality, corruption and poverty are explored through a witty story line that tries to incorporate an accurate critique on the division created through them, in all aspects of society and culture itself.

*It centers around the lives of four very different women, who have much to tell with their experiences and represent different sides of the spectrum, through their personalities, outer appearances and beliefs.

*It's both entertaining and meaningful, which is always a perfect combination and can reveal a lot, if you bother going under the surface and reading between its intricately woven lines.

*It's more than stylish. I mean, come on! Have you seen the props?

*It's more than diverse and portrays different sides of reality through various perspectives. I feel like it caters to all -if not most- of its audience and does make a strong point of inclusion, in every single episode!

🔍Frankie Drake Mysteries is such an empowering TV show, which is even more significant if we take the era in which it is set in into consideration! Some critics -men, duh- have negatively commented on the fact that it's all about women's brilliance and have, while also noticing that it makes a strong point of ''proving that women are above men''. I completely disagree, which is obviously why I'm discussing it with my audience! Saying that a show meant to empower women with its diversity only cares about how men will look in comparison, is completely ridiculous and pointless! I'm pretty sure that none of them would've made this claim, had this been centered around a male cast, right? I got quite frustrated when I came across these reviews, mainly because it made me realize that we still live in a patriarchal society, where women aren't considered to be good enough or skilled enough, and when they are portrayed as such, it's still all about men! I mean, come on! We've made significant progress, yes! But to think that women's confidence has skyrocketed just to put men down is unacceptable! Frankie's talent and skills are, basically, considered to be too exaggerated and meant to make the male characters of the story feel inadequate and useless! Which is definitely not the concept of the show! Making it all about men, when it clearly isn't, is quite laughable. Femininity is all about equality, but when that is still being questioned, what are we striving towards, really? Women going against the norm and refusing to conform to society's expectations of them, especially in the 1920's, is something I'm personally proud of, as a woman! And no, empowering women is not about doubting men or trying to belittle them. I just can't understand why people would see it as such!

🔍Overall, I cannot tell you guys how much I've enjoyed watching the first two seasons of Frankie Drake! I seriously cannot wait for more! And through this long review that I hadn't anticipated would turn into a small rant, I want to encourage you to chase your dreams and let them lead the way to the happiness that you deserve! Never let anyone doubt your abilities and make sure, to prove them wrong, every single day of your lives! That's what I'm doing and I've been quite successful so far, not going to lie! It might sound petty, but I immensely enjoy watching people's jaws drop, when they learn about what I've managed to achieve!

Have you guys enjoyed this post? Make sure to let me know if you'd like to see more TV Series reviews on the blog and don't forget to recommend any that you've watched and enjoyed in the comments!