Blog Tour - A Room Away From the Wolves By Nova Ren Suma {Review & Giveaway!}

Title: A Room Away From the Wolves 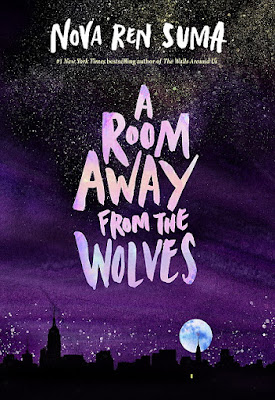 Bina has never forgotten the time she and her mother ran away from home. Her mother promised they would hitchhike to the city to escape Bina’s cruel father and start over. But before they could even leave town, Bina had a new stepfather and two new stepsisters, and a humming sense of betrayal pulling apart the bond with her mother—a bond Bina thought was unbreakable.

Eight years later, after too many lies and with trouble on her heels, Bina finds herself on the side of the road again, the city of her dreams calling for her. She has an old suitcase, a fresh black eye, and a room waiting for her at Catherine House, a young women’s residence in Greenwich Village with a tragic history, a vow of confidentiality, and dark, magical secrets. There, Bina is drawn to her enigmatic downstairs neighbor Monet, a girl who is equal parts intriguing and dangerous. As Bina’s lease begins to run out, and nightmare and memory get tangled, she will be forced to face the terrible truth of why she’s come to Catherine House and what it will take for her to leave...

*I received this book from the publisher, in exchange for an honest review! All thoughts and opinions are my own!*

I decided to give this one a chance on a whim, I'm not going to lie. Mainly because I'm not the biggest fan of Magical Realism in general but, as soon as I read the synopsis for A Room Away From the Wolves, I couldn't get it out of my head! It sounded immensely intriguing and I couldn't have been happier for giving it a chance! I'm not going to get into the plot since it would be pointless because you have to read it in order to understand its premise but, I want to start this review by saying what stood out to me the most! Except from the fact that, the plot itself is more than authentic and I haven't come across anything like it in the past, I was drawn to the way the story was written, from the very first sentence! It had the perfect flow and got the point across perfectly! Whimsical and poetic, it brought this book to life in an impressively effortless way!

Moving on to our main character, Bina! The beginning of her story is a bit vague and not many details about her life are revealed right away but, it's obvious that she's having a rough time and nobody is there to help her get through it! She finds refuge in a women's residence she remembers her mother describing vividly and with great detail when she was younger, after said mother kicks her out! Determined to leave the past behind and focus on a future that's waiting for her to conquer it in the city of her dreams, Bina is blind to the dark secrets hiding behind its closed doors. There's a mystery surrounding the residence she chose to live in and facing the truth will prove more challenging than Bina can handle. Especially when she becomes drawn to her enigmatic neighbor and her reality becomes even more dangerous than she had anticipated!

I really liked Bina as a character and even though I didn't always agree with her choices, I could definitely understand where she was coming from! At least most of the time. I couldn't connect wit her from the very beginning of the novel but, as more information about who she truly was began to unravel throughout, it became easier for me, as a reader! The supporting characters were also quite intriguing and weird - in a good way - which made the experience of reading the novel even more interesting! Monet was this enigmatic stranger that I was also drawn to so, no wonder Bina wanted to peel back her layers and expose her true self because, I would've definitely done the same! Her personality was so complex and deciphering her behavior became a challenge. She was so well crafted as a character and she really did make you want to unravel her truth and wonder about where she truly came from!

I wasn't really fond of Bina's mother, I'm not going to lie and sugarcoat things. I found her behavior unacceptable, even though she was trying to protect her and she managed to frustrate me from the very beginning of the novel! Her actions against her own daughter were inexcusable and there's really nothing else to say about it!

Overall, A Room Away From the Wolves was filled with so much magic and dealt with the unexpected side of things that definitely kept me invested throughout the novel! It's not your typical Contemporary since it has a healthy dose of Magical Realism scattered in its pages but, I felt like it was crafted in a very balanced way that was extremely well thought out and actually made sense. I would definitely recommend it, especially if - like yours truly - you're trying to get out of your comfort zone and dive into Genres that you're not that used to reading!

Nova Ren Suma is the author of the #1 New York Times bestselling The Walls Around Us, a finalist for an Edgar Award. Her new novel A Room Away from the Wolves is forthcoming September 4, 2018, from Algonquin. She also wrote Imaginary Girls and 17 & Gone and is co-creator of FORESHADOW: A Serial YA Anthology. She has an MFA in fiction from Columbia University and teaches at Vermont College of Fine Arts. She grew up in the Hudson Valley, spent most of her adult life in New York City, and now lives in Philadelphia.

a Rafflecopter giveaway
Posted by Book Lady's Reviews at 21:36