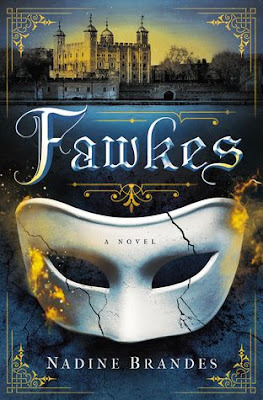 Thomas Fawkes is turning to stone, and the only cure to the Stone Plague is to join his father’s plot to assassinate the king of England.

Silent wars leave the most carnage. The wars that are never declared, but are carried out in dark alleys with masks and hidden knives. Wars where color power alters the natural rhythm of 17th century London. And when the king calls for peace, no one listens until he finally calls for death.

But what if death finds him first?

Keepers think the Igniters caused the plague. Igniters think the Keepers did. But all Thomas knows is that the Stone Plague infecting his eye is spreading. And if he doesn’t do something soon, he’ll be a lifeless statue. So when his Keeper father, Guy Fawkes, invites him to join the Gunpowder Plot—claiming it will put an end to the plague—Thomas is in.

The plan: use 36 barrels of gunpowder to blow up the Igniter King.

The problem: Doing so will destroy the family of the girl Thomas loves. But backing out of the plot will send his father and the other plotters to the gallows. To save one, Thomas will lose the other.

No matter Thomas’s choice, one thing is clear: once the decision is made and the color masks have been put on, there’s no turning back.

Regardless of the fact that Fawkes was one of my most anticipated reads, I went into it completely blind. I wanted to be surprised and had a vague idea of its premise, which is my favorite way to go into any novel, particularly Fantasy. That being said, I was truly shocked by how well thought out everything that made up this book was and could not get over how interesting the plot proved out to be!

The story follows Thomas and is set in King James's England but, there's a twist. It's being torn apart by a stone plague that was born of greed and arrogance. Colors make up a person's identity and provide each individual with virtue and honor, as well as powers based off of the masks that they wear and what color they're drawn to the most. Sounds simple enough, right? Of course not! Igniters have been abusing the powers they acquire for every color for their own purposes, whereas Keepers restrict themselves to one because they feel like using more than that goes against their values. As a result of their conflicting beliefs, war had been brewing between them for years, until King James, an Igniter, ascended to the throne and started executing Keepers for what they believed in. Thomas is caught in this whirlwind of different perspectives and things become even worse for him when his father doesn't show up to deliver the Mask he'd carved for him, like he was supposed to. Determined to find out why his father denied him the right to own a Mask and master the element that would've come with it, he sets out on a journey to London in order to find him and ends up tangled in a web of conspiracies that lead him straight to unusual allies, sinister plots and unexpected truths he's less than ready for...

First of all, I have to admit that, the beginning was a bit slow and even though it kept me on the edge for what would happen next, it took me a while to get invested in the plot and that is the reason why this novel got four stars from me, instead of five. After the first couple of chapters though, the pace picked up and the plot started getting even more interesting as the story progressed! I immensely enjoyed the way it was written and the author's vivid descriptions kept me entertained throughout the novel! I cannot express how impressed I was with the setting of the novel and how the Magic System in it worked!

Second of all, the story itself was presented in a way that drew you in and made you feel things. Anger at Thomas's father for not being there the one time his son really needed him to, frustration at how he was treated and pure elation when he came out of it all triumphant!

As a character, Thomas was more than likable and I ended up respecting him even more after every chapter that I read! He was quite mature for his age and I really fell in love with him throughout the novel! He handled difficult situations better than anyone would have and I really enjoyed watching him grow as a person and become who he was meant to be! Things didn't work out as he'd been expecting them to and they took a turn for the worse when he had to leave everything he grew up with behind because of a step back he wasn't responsible for but, he turned them around in the end and proved that he could more than handle everything life threw at him!

Also, I absolutely live for the secondary characters introduced in the novel. They were many but, they all had a purpose and weren't just created to stand by and serve no cause. On the contrary, every single character in Fawkes was created for something specific that was eventually revealed at some point in the book. I'm not going to get into too much detail about them because that would ruin the whole experience of getting acquainted with the story itself for those of you who want to give it a chance!

Overall, I'm more than glad that I decided to go into this one without seeking out any reviews on it, which is kind of ironic given the fact that I'm sitting here writing a review for it but, I feel like you're free to read it without being spoiled in any way, shape or form! And I seriously cannot recommend it enough!

Nadine Brandes once spent four days as a sea cook in the name of book research. She is the author of the award winning Out Of Time series and her inner fangirl perks up at the mention of soul - talk, Quidditch, bookstagram, and Oreos. When she's not busy writing novels about bold living, she's adventuring through Middle Earth or taste - testing a new chai. She and her Auror husband plan to live in a Tiny House on wheels. Current mission: paint the world in shalom.
{Website | Goodreads | Facebook | Twitter}

a Rafflecopter giveaway
Posted by Book Lady's Reviews at 00:22