Elena Reviews: A Touch of Gold By Annie Sullivan {A Book Worth Reading!}

Title: A Touch of Gold 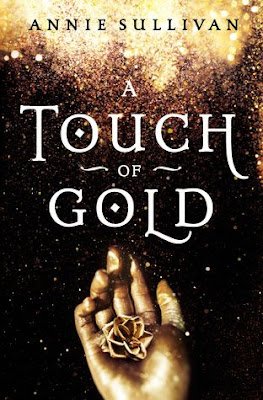 Gold is wealth. Wealth is power. Power is a curse.

King Midas once had the ability to turn all he touched into gold. But after his gift—or curse—almost killed his daughter, Midas relinquished The Touch forever. Ten years later, Princess Kora still bears the consequences of her father’s wish: her skin shines golden, rumors follow her everywhere she goes, and she harbors secret powers that are getting harder to hide.

Kora spends her days locked in the palace, concealed behind gloves and veils, trying to ignore the stares and gossip of courtiers. It isn’t until a charming young duke arrives that Kora realizes there may be someone out there who doesn’t fear her or her curse. But their courtship is disrupted when a thief steals precious items from the kingdom, leaving the treasury depleted and King Midas vulnerable. Thanks to her unique ability to sense gold, Kora is the only one who can track the thief down. As she sails off on her quest, Kora learns that not everything is what it seems—not thieves, not pirates, and not even curses. She quickly discovers that gold—and the power it brings—is more dangerous than she’d ever believed.

Midas learned his lesson at a price. What will Kora’s journey cost?

I was immensely excited when I got approved for this one because I've had my eye on it for a while because, even though the myth of King Midas is quite popular in Greek Mythology, I don't think there are that many novels based off of it! Before I move on to the review itself, I'd like to provide you guys with some general information on the legends revolving around King Midas and his golden touch. There are a lot of assumptions concerning where he actually came from and who his ancestors were and in some variations he has a son while in other, he has a daughter. There is an alternative story about his father being poor that also involves an Oracle's prophecy about him arriving to an assembly in a wagon and being appointed King. It's actually tied with Alexander the Great and the Gordian Knot but, I'm not gonna get into that because it has nothing to do with the book. The Golden Touch came when he saved a satyr and to express his gratitude, Dionysus offered Midas his choice of whatever reward he wished for. In one of Hawthorne's version, his daughter was upset when her roses turned to gold and in an effort to comfort her, she was also turned to gold as well. When he prayed to Dionysus, he responded by telling him to wash everything that he had turned to gold in the river and reverse the Touch. Now that the brief lesson on the myth is over, let's move on to my thoughts on the book.

The book follows Kora, the curse daughter of King Midas whose greed left her with gold skin and the ability to absorb gold and transfer it with a single touch. She's feared by her people and is forbidden from leaving a palace but, when the items her father turned into gold years ago are stolen and he is left weakened because of it, she decides to risk everything in order to retrieve them. On the journey, she meets an enigmatic pirate, whose mysterious behavior will either be her downfall or her salvation.

So, let's start with the positives because they greatly outweigh the negatives! First of all, the premise was extremely unique and felt so authentic it was more than impressive! The story was immensely addictive and I was hooked to it from the second I started reading. It was such a quick and suspenseful read that it actually never got tiring or predictable...Not even once! The writing was quite descriptive and created these vivid images that I couldn't get enough of. It felt like I was there and could taste the fresh air of the sea itself.

The characters themselves were more than likable and I found myself connecting with them from the very first chapter of the book. I loved Kora and really admired her strength and determination. It became clear from the beginning that she truly and sincerely cared for her kingdom and wanted to see it prosper. I also felt so angry at every single person who never bothered to give her a chance and directly blamed her for her father's mistakes. The people's cowardice and fear was so ridiculous I wanted to knock some sense into their brainless heads, in order to make them realize how wrong they were in being so prejudiced and fearful. I liked how her character developed the most because it had the most impact on the story and how it progressed. She was a very well thought out character as well, which is always appreciated!

I loved Royce and found the mystery surrounding him quite tempting! He was so rough around the edges but, at the same time hid so much pain and agony behind his tough exterior. Being suspicious was very understandable on his part and the way he handled things throughout the novel was more than admirable. He and Kora understood each other perfectly and falling in love was basically a matter of time for them. Their romance didn't overshadow Kora's quest and her determination to retrieve the stolen items, which I personally appreciated as a reader. Their attraction to each other and the chemistry they shared was obvious from the very beginning and I seriously wouldn't have had it any other way. Royce's character development wasn't as spontaneous as Kora because I feel like he did a perfect job of bringing out her true self and I really admired him for that! He was her anchor and guided her through the journey without a single doubt that she would succeed. He truly cared for her and saw himself in the pain that was hidden under the surface, something that made him believe in her abilities and never doubt what she was truly capable of.

I feel like the secondary characters added a nice touch to the story as a whole and made it even more interesting and exciting to read. They added a little bit of spice and everything nice into it and affected the way it progressed in an extremely positive way! I'm not going to go through them in detail because really, what would be the fun in that? They were a force to be reckoned with though and made the experience of reading this one so much better!

Moving on to some things that are a bit on the negative side and could've been handled a bit differently. Even though this was such a quick read, it also felt a bit rushed and unexpectedly abrupt during the last couple of chapters. I really would've appreciated some more details on the main characters and their backgrounds, which kind of left some minor plot holes scattered around that could've been easily filled with some general information about them. I really liked how the book ended but, it didn't blow my mind because it felt as if I didn't get any closure as a reader!

Before I wrap up this pretty lengthy review, I'd like to say that I rated the book three stars at the beginning because of these negative aspects I mentioned above but, realized now that they're not too severe and they didn't take away any of the enjoyment I got while reading A Touch of Gold. On the contrary, it's actually been a while since I wholeheartedly enjoyed a Fantasy novel and this just made me feel so many emotions while reading it that I couldn't oversee or ignore, just because of some minor things that could've been a bit more descriptive.

Overall, I immensely enjoyed A Touch of Gold and the experience of reading it was just phenomenal! I cannot express how much excitement went into the experience of getting acquainted with the story and its characters because of how fascinating it sounded!  It's definitely one of those books worth really because it's truly original and very well executed! I would highly highly recommend it to all of you readers out there!

Let me know if you've read A Touch of Gold or if you plan on reading it soon! What do you think you would've asked for if a God offered you a reward for your good deeds? I'd definitely go for an endless supply of books!