Title: Bring Me Their Hearts 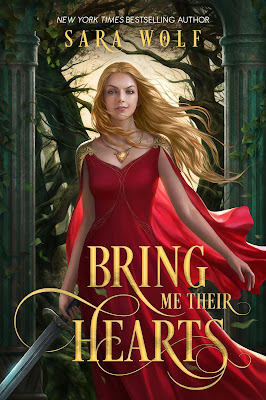 Zera is a Heartless – the immortal, unageing soldier of a witch. Bound to the witch Nightsinger ever since she saved her from the bandits who murdered her family, Zera longs for freedom from the woods they hide in. With her heart in a jar under Nightsinger’s control, she serves the witch unquestioningly.

Until Nightsinger asks Zera for a Prince’s heart in exchange for her own, with one addendum; if she’s discovered infiltrating the court, Nightsinger will destroy her heart rather than see her tortured by the witch-hating nobles.

Crown Prince Lucien d’Malvane hates the royal court as much as it loves him – every tutor too afraid to correct him and every girl jockeying for a place at his darkly handsome side. No one can challenge him – until the arrival of Lady Zera. She’s inelegant, smart-mouthed, carefree, and out for his blood. The Prince’s honor has him quickly aiming for her throat.

So begins a game of cat and mouse between a girl with nothing to lose and a boy who has it all.

{Grab yourself a copy here!}

Bring Me Their Hearts follows our main character Zera, a Heartless - literally speaking - girl whose purpose is to serve the witch that keeps her heart in a jar, since saving her from the bandits that killed her family and left her for dead. She's become an immortal soldier, still feeling things like a human would but unable to truly enjoy them. She's yearning for a taste of the real world after so much time away from it and the opportunity comes in the form of a Prince whose heart she has to deliver to the witches in order to stop an upcoming war and at the same time, win back her own heart! But, the process makes her realize how much she missed being a normal human girl and the more she meets the Prince, the less determined she is to see things through and reclaim what she lost. Will Zera be able to condemn the Prince who made her feel things she'd forgotten that she could to a life like the one she leads or will she try to find a way out of it?

Let me start this review by saying that, I did not expect to like this book at all. In case you're wondering, that is because I usually don't enjoy books that are extremely hyped up or have been promoted all over the book community like. That's just the way it's always been for me and the main reason I always go for the stories that I know I'll enjoy and don't listen to the hype when it comes to choosing what to read next! I kept seeing this one on Instagram and truth be told, I got quite tired of it an didn't really give it much thought until...I read its synopsis. It was like my mind exploded with how unique it sounded and I just had to read it, in order to see for myself whether the state of denial I found myself in concerning this book was basically worth the trouble. It really wasn't because I loved the story from the moment I read the first paragraph and was introduced to one of the most hilarious and spunky heroines I've ever come across!

Zera was such a force to be reckoned with! I connected with her from the moment I started reading the book and was so excited when I realized how different she was from the usual and ordinary female kind of trope. It was so easy to sympathize with her and not only feel but also understand her pain! It all felt so vivid and real that I had to keep convincing myself that unfortunately, it wasn't. I was so frustrated at how the world saw her and got extremely angry with the witches for sentencing her to this life of misery by stealing the memories that made her who she was in the past. She's extremely amusing, entertaining and more than resourceful! She's also the kind of character you don't come across in books very often, which was quite refreshing! She's funny, self deprecating and not afraid to speak her mind when she feels like it!

When it comes to Lucien, I had some trouble getting a grasp on his personality but, grew very fond of him as the story progressed. He was so tired of seeing the world suffer while those who were supposed to protect it stood by and watched in silence so, he decided to do something about it! His sense of morality is astounding throughout the novel and I really admired his determination to see justice served and stop those who corrupted it with their wrong use of power. Like Zera, he was a very well thought out character and I found myself immensely enjoying their back and forth banter more than anything! They definitely had chemistry and would've made a great team, if that cliffhanger at the end hadn't basically ruined everything...No spoilers but, yes guys! This one has a cliffhanger at the end that will leave you screaming out in frustration and desperately wishing for ... you guessed it! THE SEQUEL!

The story was truthfully so much fun to read guys! If the hype surrounding this one scares you, just take a leap of faint and give it a try! You won't be disappointed, I assure you! It's such an authentic and extraordinary tale of loss, revenge, war and heartbreak. The premise is, of course, fascinating and at the beginning, I thought the Heartless were some kind of Vampire Hybrids but, there's so much more history in their existence scattered throughout the novel and I absolutely  loved learning all about it! It was truly amazing and well, genius! So many things kept happening and the fast pace made them stand out even more! They were witty, full of suspense and managed to keep me on the edge of my seat until I reached the very last page of the book!

The only negative sort of thing I have to say about this wonderful work of art, is that it got a bit predictable at times. The writing was beautiful and gave Zera her own voice that could easily be distinguished from everyone else's. The plot was unique and refreshing. The story perfectly balanced the aspects I've already mentioned above and I never got tired of reading it, which is very important and some people don't really take into consideration! Last but not least, the world building was close to phenomenal and I don't think it could've gotten any better!

Overall, I extremely enjoyed Bring Me Theirs Hearts and would encourage you guys to do so as well! The sooner the better! 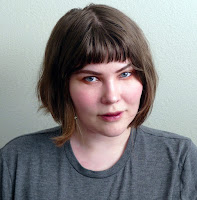 Sara Wolf is a twenty-something author who adores baking, screaming at her cats, and screaming at herself while she types hilarious things. When she was a kid, she was too busy eating dirt to write her first terrible book. Twenty years later, she picked up a keyboard and started mashing her fists on it and created the monster known as the Lovely Vicious series. She lives in San Diego with two cats, a crippling-yet-refreshing sense of self-doubt, and not enough fruit tarts ever.
{Website | Goodreads | Facebook | Twitter}