Elena Reviews: More Than We Can Tell {Letters to the Lost #2} By Brigid Kemmerer

Title: More Than We Can Tell 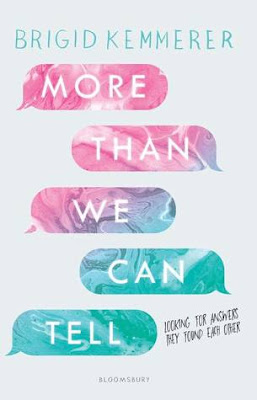 From the author of Letters to the Lost comes a heart-wrenching story of two teens with big secrets and a love that could set them free.

Rev Fletcher is battling the demons of his past. But with loving adoptive parents by his side, he’s managed to keep them at bay...until he gets a letter from his abusive father and the trauma of his childhood comes hurtling back.

Emma Blue spends her time perfecting the computer game she built from scratch, rather than facing her parents’ crumbling marriage. She can solve any problem with the right code, but when an online troll’s harassment escalates, she’s truly afraid.

When Rev and Emma meet, they both long to lift the burden of their secrets and bond instantly over their shared turmoil. But when their situations turn dangerous, their trust in each other will be tested in ways they never expected. This must-read story will once again have readers falling for Brigid Kemmerer’s emotional storytelling.

More Than We Can Tell follows Rev, who was first introduced in Letters to the Lost and Emma, a computer geek who thinks that every problem can be solved with the right code. She's not close to her mother and has been seeking her father's approval - who's actually a game designer - for as long as she can remember. When her parents' announce that they're getting a divorce, she's left picking up the pieces and having no idea how to move on with her life. Rev has a loving adoptive family that cares for him and treats him like their own but, when a letter from his abusive father arrives, things are turned upside down and the demons of his past come back to haunt him. When Emma starts getting threatening messages on the game she designed, she has no one to turn to and when their paths intertwine, they find solace in each other but, how long can it really last for? Will they be each other's saving grace or will Rev's past get in the way of them having a better future together!

I really want to start this review by saying how much I enjoyed Rev and Emma's story! Reading about their struggles was very eye opening, especially because it's been a while since I've read a Contemporary with so much depth scattered throughout its pages! Both of the characters are terrifyingly relatable and what they're going through is actually more important than people might realize. I found myself sympathizing with them for the majority of the book but, I sometimes got very frustrated at their choices and how much those choices affected their lives. There wasn't really a scale of right and wrong since every one of us decides what's morally correct and what isn't based on what we're aiming for in life and how much we're willing to sacrifice for it! But, I feel like these two had no one to turn to for different reasons.

Emma never felt comfortable discussing her life with her parents and Rev didn't want to alert his when the letter from his father arrived, because he was afraid of disrupting their lives. Both of them got lost in this whirlwind of not knowing what to do and the people around them had no idea about it at the beginning! Emma's mother made me really angry sometimes because she was never supportive of her dreams and desires. Her criticism of everything her daughter was made their relationship quite nonexistent and even though I could understand where she was coming from, I didn't really agree with the way she underestimated Emma's abilities and had no faith in her at all! Her father was not much better though, when it comes to how he behaved towards them both! Emma got her love of being a game designer from him but he never seemed to care enough. He got so lost in his own work and never spent any quality time with his daughter, making it impossible for me to actually like and respect him as both a person/character and a father.

On the contrary, Rev's adoptive parents would do everything to see him happy, considering what he went through and how long it took him to actually start recovering from it! The person who was supposed to love and care for him, put him through hell. He expresses this fear of becoming like his father a couple of times throughout the novel but, he's so much more than where he came from. He's caring, mature and would do anything to protect those he loves, even hide the truth from them! His romance with Emma isn't the most conventional and it takes a while for it to completely unfold, which was actually quite refreshing. It was there but, didn't overshadow the important issues the character dealt with in the novel, which isn't an easy feat to achieve when it comes to Contemporary novels!

The secondary characters were quite interesting as well and I loved seeing glimpses of Declan and Juliet throughout the novel. I feel like the author handled the topics of abuse and internet bullying in the best way possible and really brought the dangers they undoubtedly carry forward. Emma's story reflects on what's going on in the society we live in and how we can change it by educating ourselves and those around us. Both she and Rev represent the people who went through similar struggles and managed to survive them, becoming stronger as a result and learning to trust the people who love and care for them! Which is a very important message we all need to embrace in order to go forward!

Once again, I really enjoyed the author's effortless writing style and how fast paced it was! I feel like everything was resolved the way it should've been. The only reason I didn't give More Than We Can Tell a full star rating even though it was a wonderful read, was because I enjoyed its predecessor just a bit more! Overall, this is a novel that really touched me and I cannot help but recommend to those of you who enjoy YA Contemporaries! The story had so much depth, the characters were three dimensional and developed throughout the novel, the relationships between the characters were extremely realistic and the conclusion was more than satisfying!