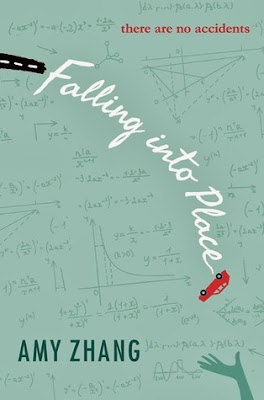 Liz Emerson doesn't understand any of it.

I understand her sadness and loneliness and silence, her shattered heart.

It doesn't have to be this way, does it?

It wasn't always this way, was it?

On the day Liz Emerson tries to die, they had reviewed Newton's laws of motion in physics class. Then, after school, she put them into practice by running her Mercedes off the road. Why did Liz Emerson decide that the world would be better off without her? Why did she give up? The nonlinear novel pieces together the short and devastating life of Meridian High's most popular junior girl. Mass, acceleration, momentum, force—Liz didn't understand it in physics, and even as her Mercedes hurtles toward the tree, she doesn't understand it now. How do we impact one another? How do our actions reverberate? What does it mean to be a friend? To love someone? To be a daughter? Or a mother? Is life truly more than cause and effect? Amy Zhang's haunting and universal story will appeal to fans of Lauren Oliver, Gayle Forman, and Jay Asher.

Reading Falling Into Place has been on my to-do list since I pre-ordered it four years ago! It's been sitting on my TBR shelves since then and it was part of a reading challenge for 2018! It's been a month since I read it and I seriously have no idea how I feel about it yet. So, this review will probably be a bit jumbled up and all over the place and I'd like to apologize in advance for it! I'm not going to talk about the plot because it's one of those books you just have to dive into without knowing much about its storyline.

I want to start with what stood out the most for me, as a reader! I absolutely loved the writing style of Falling Into Place! Some people couldn't really get used to it because it's very lyrical and full of metaphors but, that's what made me fall in love with it! It was beautiful, heartbreaking and full of all these conflicting emotions I had no idea what I was supposed to do with. They totally went against each other and I'll explain why in a bit! I found myself tearing up more than once and being frustrated by the majority of what was happening throughout the novel. Regardless, the writing style was my favorite thing about this book and I the way feelings were reflected in its sentences just blew my mind! The author managed to express so many feelings in such a short amount of pages!

Moving on to the main character! Liz is not a good person and it's made perfectly clear as soon as you start reading the book! She's an expert at destroying lives without second thought and has no positive qualities to redeem herself. The whole book, is told in past and present without any chronological order! Every single chapter is another reason why Liz Emerson is a terrible person and people either fear or hate her! She wasn't likable at all and even though I did feel sorry for her at times, I couldn't really sympathize with her or justify her atrocious behavior! She contradicted herself and was unlike any other heroine I've come across in Contemporary novels, which made this book even more fascinating and different than anything I've read in the past! You're supposed to hate her, there's no way around it! Her thoughts were so different from her actions and even though we got a glimpse of her regret, selfishness and cruelty won every single time! Until she realized that, there was no turning back and she ruined innocent peoples' lives without having a care in the world for the inevitable consequences that would undoubtedly follow her actions!

Through the flashbacks that the book consists of, we get to know the characters affected by Liz's cruelty and eventually, get to the point where things are supposed to come to an end for her. She's mean to everyone around her, including herself and the pieces of this complicated puzzle that makes up her life, slowly begins to build itself! The truth comes into focus throughout the book and we are witnesses to her traumatic childhood and pointless existence. Depression is frightening, even if you're someone like Liz and we are witnessed of how it slowly tore her apart and made her want to kill herself. She feels completely alone and believes that she has nothing to live for. Her best friends' lives are affected by her decisions and her boyfriend is anything but. Her mother is away all the time and doesn't really care about her well being and she's forced to ridicule the only boy she's ever had feelings for because of this stupid need to prove herself, in the most negative way possible!

My biggest issue with the novel and the thing I feel uncertain about, is the narrator. I'm not going to reveal his/her identity but, even though there were signs that pointed towards said identity, I was still shocked when it was confirmed! I really don't know what I'd expected but, I sometimes found the narration to be quite unreliable and felt like something was missing from it. Depth was there and the three dimensional nature of the characters is cannot be doubted since you went from hating them to feeling sorry for them to fuming in anger with their choices but still, the narration didn't sit well with me. I don't know if it was because I would've liked it to be a bit more descriptive but still as lyrical, which is a difficult combination to achieve! I felt like some questions were left unanswered but, I still have no idea whether the ending left a positive or a negative impression. I needed some closure that I certainly did not get which left the ending open and me disappointed because I was desperate to see at least a glimpse of the After!

I have no idea if Liz changed her ways after what happened or whether she ended up back to where she started but, one thing's for sure! Falling Into Place left quite an impression of me and it's a book that won't be easy to forget! I'm still curious and would die for some more chapters but, I cannot recommend it enough! There are a lot of people who condemn its writing style and characters but, I feel like we need more stories like Liz's in Contemporary Fiction! How often have you gotten to read a book all about someone's bad decisions that led to disaster? How often have you come across a book about the evil queen bee who ruins lives just so hers is not the only one that's been destroyed? Not many, right?! She's still as relatable as a mean girl can get and she had a lot to share with the world! Why not come up with characters or write about people who've had the same experiences? Food for thought that might turn into so much more some day!