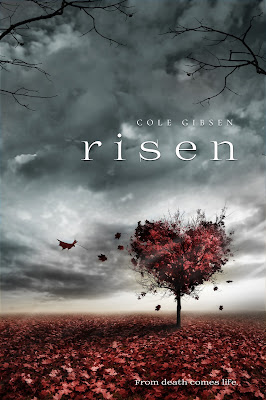 My aunt has been kidnapped by vampires, and it’s up to me to save her. Only…I had no idea vampires existed. None. Nada. I’m more of a reader than a fighter, and even though I’d been wishing to escape my boring existence in the middle of nowhere, I’d give anything to have it back now if it meant my aunt was safe.

Then there’s the vampire Sebastian, who seems slightly nicer than most of the bloodsuckers I’ve run into so far. Yes, he’s the hottest being I’ve ever come across, but there’s no way I can trust him. He swears he’s helping me get answers, but there’s more to his story. Now I’m a key pawn in a raging vampire war, and I need to pick the right ally.

But my chances of surviving this war are slim at best, when the side I choose might be the one that wants me dead the most. 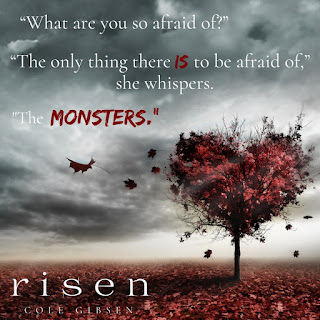 Risen is a Young Adult Paranormal novel, which I couldn't wait to get my hands on since it sounded right up my alley when I read its synopsis! It follows Charlie, who has lived in a secluded cabin with her aunt for the majority of her life and is ready to finally leave it behind and experience life in the outside world! When she returns home from a walk in the forest with her trusted dog Jazz and talks about his abnormal behavior, things take a turn for the worse and her life takes the opposite direction from the one she planned on eventually following! Vampires destroy the only home she's ever known and take her aunt away, leaving one of their own to dispose of her! But, she's too compelling for him to kill and they end up joining forces in a race against time, in order to discover the truth about where they both came from before it's too late!
I'm not going to get into any more details about the plot itself, since I would definitely recommend going into it without knowing much! I've always been a huge fan of Vampires and haven't read a novel about them in ages so, I was very excited when I had the opportunity to read and review Risen! So of course, I had to jump at the chance and give it a try, since the idea of it alone fascinated me! I went into it without knowing what to expect and I was hoping that it wouldn't end up being just another cliche Vampire Romance novel full of tropes that I've already left behind! But, I was pleasantly surprised! It was original and authentic, which kept me on the edge throughout it!

The story line had me hooked from the beginning since the author didn't waste any time with formalities and jumped straight into the action! From the beginning til the end, its fast pace made the experience of reading it so much more interesting and suspenseful, which I personally prefer as I reader since I'm not the biggest fan of slow paced books! It was also very engaging and I immensely enjoyed how it developed. It introduced me to this entirely new and different world about vampires which I was very grateful for since it was completely different from what I was used to and kind of expected. 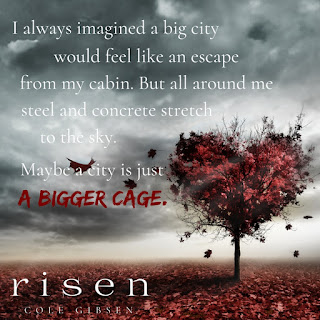 I absolutely fell in love with the characters and their chemistry blew my mind! I was rooting for them from the very first chapters and couldn't wait to see how the story would progress! Charlie grew up isolated from the world and her thirst for it becomes obvious before the story even takes its course! She's definitely loyal but also strong willed, ready to face whatever challenges get in her way and experience life to the fullest! She grew up in this bubble of security her aunt kind of forced her into and when the monsters came, she was forced to reevaluate her life and decide on a completely different course! She rose up to the difficult challenge of saving Rachel and discovering the truth about her past, something that brought out her inner courage and determination!

Sebastian was also a force to be reckoned with! I absolutely loved the banter between them and the intensity of it all could be felt through the pages. No, not exaggerating! He basically sacrificed everything in order to help Charlie, even before he realized that she could actually help him remember his past! Their attraction to each other was obvious from the very beginning but, things are never as easy as they seem! Especially considering the fact that, they're very different from each other and there's no guarantee that things will work out! 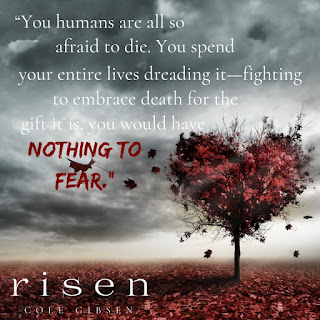 The only thing I wish would've been different and the only reason I didn't give this one a full five star rating, is its length. I feel like it should've been a bit longer because it would've had the chance to explore the characters' background a bit better and given us readers more information about where they came from! Even though I love it when books leave gaps and questions that will undoubtedly be filled and answered in future novels because they give off a certain suspense that keeps you on edge, Risen took it a bit far in the sense that, the author didn't explain basic terms used in the novel and left a lot of details out of the plot itself. It wasn't a huge thing and it obviously didn't affect how I felt about the book as a whole but, it would've been nice to have definite answers on some pretty basic questions that arose from the initial building of this unique world! I'm naturally a very patient person and I really hope that they'll be answered in the next novel because they concern the foundation of this book.

Overall, I feel like Risen took something familiar and completely transformed it into something unique, which isn't an easy feat to accomplish! The writing was amazing and matched the tone of the novel perfectly, which made it so much more enjoyable to read! It was a suspenseful and full of action YA Paranormal novel that is not like Twilight or Vampire Diaries at all so, ignore the little unfortunate blurb at the top of the synopsis...Because it truly is so much better both in terms of writing and development! It was also very entertaining and I cannot wait for the sequel!

Growing up, Cole Gibsen couldn’t decide what she loved more—dogs or books. Rather than choose, she decided to devote her life to both! Dog trainer (wrangler) by day and author by night, she’s the author of more than ten books with more on the way.

a Rafflecopter giveaway
Posted by Book Lady's Reviews at 00:18