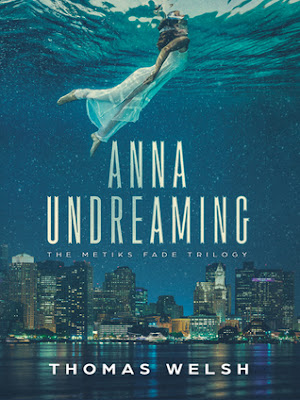 Anna is a student surviving the city, and she lives by a simple credo, “Never play their game; their game is always rigged.” For every man she has ever known, it’s a saying that has served her well.

That all changes on the night of “The Big Storm,” when Anna is slipped a date rape drug. Though she saves herself and her best friend, Anna is lost to the dark heart of the city and finds herself hunted by The Night Collectors. Unsure if these monsters are real or hallucinations, Anna nonetheless fights them as best she can. The battle attracts a stranger—Teej—who saves her using powers she cannot understand. He explains that she is an Undreamer and possesses the same powers, and in the future, he will not be the one to save her. She will save him.

But Anna is not yet ready to join Teej and stand against The Dreamers. She has difficult decisions of her own to make. Decisions she has always run from. She still has her partner’s suicide letter. It remains unopened. She still wears his ring, though she can’t seem to remember his face.

Anna learns of The Dreamers - artists so preeminent in their respective fields that they can paint, dance, sew or sing new realities - and as she travels through their creations, she learns that there’s as much beauty in the world as there is horror. With a complex conspiracy at work within the community of Dreamers that threatens to undermine reality itself, Anna will have to look deep within herself, and eventually have to face the horrors of her own past, to save her old world as well as her new one.

Anna Undreaming is a dark urban fantasy, and the first book in the The Metiks Fade trilogy.

Anna Undreaming is a dark Urban Fantasy novel, following our main character Anna, who has just discovered that she has the ability to wield supernatural powers by traveling through imaginary worlds created by the Dreamers. At first, she's not able to distinguish reality from illusion but, she fights the monsters she encounters in these hallucinations she's lost in, with everything she's got! Her battles attract the attention of Teej, who saves her using powers she cannot understand and reveals that she actually shares them and will one day save him in return! She's an Undreamer, which means that she has the ability to join Teej's fight and stand against the Dreamers, artists that can create new realities which are filled with both beauty and horror!

The setting of the story blew my mind from the moment I started reading it! At first, I had no idea what to expect because the synopsis was very hazy inside my head and I couldn't really remember it in detail. The first couple of chapters were a bit slow but, as the story progressed and I got used to its pace, I finished it in a matter of hours! The plot was very engaging and managed to keep me at the edge of my seat for the majority of it! Its combination of dark romance and unique story line really intrigued me because one complimented the other perfectly! There were so many interesting terms scattered throughout the novel and each time I encountered when, I got even more excited and couldn't wait to lose my self even more in this fascinating world the author created!

The idea behind the novel was seriously so authentic and it's worth reading just because of its premise! I loved the Hazes and how much they actually impacted the plot itself. They weren't really hallucinations and I'm so glad Anna fought through them because they took place in a different reality but still influenced the real world. Her character development was quite impressive and probably what I enjoyed more in the novel! She has so many layers as a character and I loved how they were slowly revealed through each chapter. She's definitely what we'd call a three dimensional character and has a depth that's not very easy to come by in Fantasy books nowadays. She's one of the most mysterious heroines I've come across recently and I really appreciated her determination to see things through, as well as her bravery when it came to fighting monsters she wasn't even sure were real. She really stood out as a main character and learned from her mistakes, without having to repeat them!

Teej was also a very intriguing and mysterious character, who's purpose was to guide Anna through wielding her powers and helping her come to terms with who she's meant to be. He was such a patient and selfless character, willing to do anything in order to help Anna and show her the ropes of this new world that was revealed to her unexpectedly and without a single warning! There wasn't really a romance between them, just the potential of one that I cannot wait to be the witness of! I've probably never shipped a - to be - romance as much as I ship theirs so, fingers crossed there will be one in the next novel. I know not everything is about romance and this particular story definitely doesn't need one to stand out but, the anticipation is already there without overshadowing everything else so, why not?

The writing itself was great and even though I'm not the biggest fan of third person narratives, the author managed to make me enjoy this one! Also, the lack of answers and some pretty important twists really added so much more into the story itself, making the experience of reading it even better! I really appreciated the fact that, there were some questions left unanswered but not infuriatingly so, because that just adds to the mystery and builds up the before mentioned anticipation of finding out what'll happen next!

Overall, Anna Undreaming is a very original story, that captures the meaning of fighting through a reality you're not sure exists, in order to create a better life for yourself! The world crafted through the pages of this book really made me want to get lost in it and the ending left me hungry for more! I absolutely fell in love with Anna and how real she felt, which made it so much easier to connect with her as a character and follow the journey she embarked on! Highly recommend it to fans of dark Fantasy, ready to enter a world they've never experienced before! 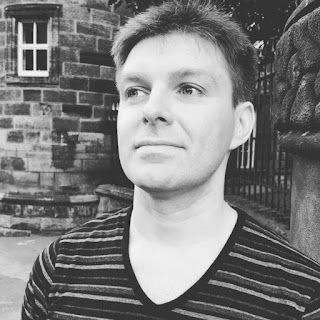 Hi there! My name is Thomas Welsh and my first novel ANNA UNDREAMING is a dark urban fantasy story that was released in March 2018. It is the first entry in the METIKS FADE trilogy. You can buy it here.

I am 37 years old and live in Scotland, and I started writing fiction early last year. I was the winner of the Elbow Room fiction prize for my short story “And Then I was Floating” and I’ve also been published in a few other short story collections, including 404 Ink and Leicester Writes. I received an honourable mention in Glimmer Train’s Very Short Fiction award and my story Suicide Vending Machine will soon be featured on the Pseudopod Podcast.

I have been published in You Died – a book about Dark Souls – and I also write about games, music and film. You can find my work on Kotaku, Unwinnable Magazine and GlitchFreeGame. For my games writing, I was inducted into the fellowship of BAFTA.