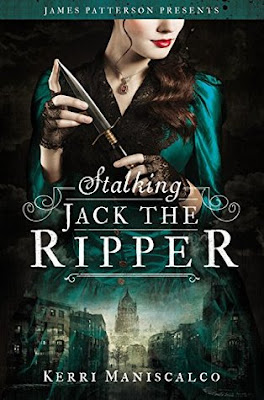 Presented by James Patterson's new children's imprint, this deliciously creepy horror novel has a storyline inspired by the Ripper murders and an unexpected, blood-chilling conclusion...

Seventeen-year-old Audrey Rose Wadsworth was born a lord's daughter, with a life of wealth and privilege stretched out before her. But between the social teas and silk dress fittings, she leads a forbidden secret life.

Against her stern father's wishes and society's expectations, Audrey often slips away to her uncle's laboratory to study the gruesome practice of forensic medicine. When her work on a string of savagely killed corpses drags Audrey into the investigation of a serial murderer, her search for answers brings her close to her own sheltered world.

Stalking Jack the Ripper is a Historical Fiction/Mystery novel, based off of Jack the Ripper, who terrorized London in the late 19th century. He's been called many names and this is what he became known by. If I'm not mistaken, a couple of suspects were taken into custody but, the identity of the true killer was never actually discovered. There was some talk of DNA actually revealing the true Ripper but, it hasn't been confirmed.
Now that the you dear readers have a small insight to the infamous murderer, let's move on to the actual review. I wanted to include a couple of lines concerning the matter, just because I don't have any intention of spoiling the book for you, by revealing its actual plot. I thought going for less specific information would be better than starting to talk about how things progressed in the book itself.

First of all, I kept putting this one off because of the hype. I'm talked about it before, not prejudiced against hyped up books but, the awareness of the fact kind of ruins them for me before I even get the chance to read them. Which has happened in the past and my interest in series that started out perfectly actually diminished because of it. But, I was too curious to let it go unread and have always been interested in documentaries of the sort so, I thought to myself, why not read the book. The fact that I was on a Historical Mystery binge definitely helped motivate me and I found myself checking out with it! I don't regret it! It was a very enjoyable story and I found myself immersed in it from the very first chapter.

I absolutely loved Audrey and her ability to adapt to situations as she did. Every situation she got herself in was met with a reaction that fit almost perfectly and her way of thinking was quite impressive! She went against conformity but, also embraced it in order to gain knowledge and become who she was meant to be, in a world that tried to convince her she was anything but herself. She was somewhere in between, trying to balance a life in society as an acceptable part of it and at the same time, going behind its back and expectations by conducting postmortems and learning about science and the human body. Doesn't that sound fascinating? I'd definitely be willing to trade places with her, at any time, mostly because her life sounds so much more interesting than mine is at the moment!

Both she and Thomas were very likable and well written characters, who carried out the story in their own back and forth! I loved their banter and laughed out loud at how they reacted when they found themselves in each other's presence! Thomas is still a mystery to me, because we don't really get a lot of information on his background, which is always better than knowing everything straight away! It definitely adds to the suspense and excitement of trying to figure things out! It's also extremely intriguing when we don't get a character's whole history from the first book in a series and more things are revealed to us with each book!

Moreover, the writing style won me over from the moment I started reading! The book itself is told from Audrey's perspective which I always prefer as a reader and I appreciated her inner voice and the chance to get a glimpse into her way of thinking. She's determined, strong willed and very intelligent! Qualities that were looked down upon and weren't really appreciated in that century, she found herself embracing and putting into good use! Her frustration was palpable throughout the book and I could feel her disappointment with the path others chose for her, as well as her resistance to it. She stood up for herself and pushed against the oppression. I really hated the way her father treated her, which isn't an unusual parental behavior for the century but, could definitely understand why. He wasn't cruel by any means, he was just a bit misunderstood and just tried to take care of her the wrong way.

The plot itself was extremely well written and thought out, in a way that brought the story of Jack the Ripper to life. The writing gave it life and the descriptions made the images even more vivid inside my head, which made the experience of reading the book better! I wasn't by any means mind blown by it but, I can definitely say that I really enjoyed it! It was extremely suspenseful and the progress of things kept me on edge throughout it! I couldn't stop reading and even though I unconsciously made some predictions concerning the ending - and was proven mostly right - it didn't take away from the suspense and excitement of what was coming!

Concerning the plot and character development, it was definitely there - especially when it came to the plot - and even though the characters weren't what you'd call underdeveloped because they weren't lacking in the depth department, I would've liked to see a bit more from them, in terms of behavior, if that makes any sense. Last but not least, some parts felt a bit rushed, even if they were very enjoyable! I felt like something was missing and was disappointed by how short the book itself was, because certain scenes and events could've been a bit more descriptive!

Overall, I was pleasantly surprised by how much I enjoyed Stalking Jack the Ripper. It was full of mystery, suspense and kept me at the edge of my seat from the beginning until the end! I couldn't have been happier for finally picking it up and I seriously cannot recommend it enough! Really wish it would've been a bit longer but, on to the sequel!