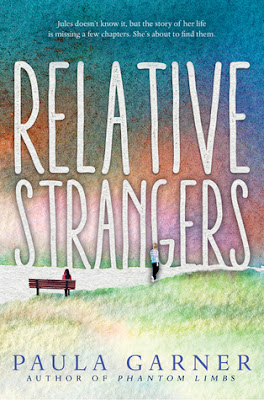 Why is there a gap in Jules’s baby album? A wry and poignant coming-of-age novel about finding the truth in lies, salvaging hope in heartbreak, and making peace with missing pieces.

Eighteen-year-old Jules has always wished for a close-knit family. She never knew her father, and her ex-addict mother has always seemed more interested in artistic endeavors than in bonding with her only daughter. Jules’s life and future look as flat and unchanging as her small Illinois town. Then a simple quest to find a baby picture for the senior yearbook leads to an earth-shattering discovery: for most of the first two years of her life, Jules lived in foster care. Reeling from feelings of betrayal and with only the flimsiest of clues, Jules sets out to learn the truth about her past. What she finds is a wonderful family who loved her as their own and hoped to adopt her — including a now-adult foster brother who is overjoyed to see his sister again. But as her feelings for him spiral into a devastating, catastrophic crush — and the divide between Jules and her mother widens — Jules finds herself on the brink of losing everything.

*I received this book for free in exchange for an honest review. All thoughts and opinions are my own!
Jules has never met her father and lives with her estranged and closed off mother, desperately wishing for a close knit family others take for granted. When she's asked to find a baby picture for her school's senior yearbook, she discovers that there's a very noticeable gap in her baby albums, which leads her to making a shocking discovery. She actually spent the majority of her first two years of life in foster care, which was kept a secret from her until now. The clues she manages to uncover lead her to a loving family who never wanted to give her up and planned on adopting her but, never had the chance to do so. They are overjoyed to see her and their now adult son couldn't have been happier for getting his foster sister back after so many years. But, as she starts to develop feelings for him, she loses sight of what's important and finds herself on the brink of losing everything.

I went into Relative Strangers having a quite vague idea of its premise and not wanting to spoil myself by reading reviews, since I feel like it's just one of those books you better go into without doing so. Which is pretty ironic since I just dedicated a paragraph to explaining the story but, I think I kept it pretty spoiler free since it's just information you're already aware of if you've read the synopsis of the novel! I really enjoyed the story itself and found the idea of it very unique and different from anything I've personally read before. Which is what drew me to it in the first place!

The writing was also great and focused on giving us the best perspective for the story itself, with introspective descriptions that made it easy to get a glimpse into what the characters were feeling. It got a bit repetitive at times though and I have to say that I actually liked the beginning so much more than the ending. It started out being extremely interesting and well thought out, since I just had to keep reading in order to see what would happen next and what action Jules would choose to take after the truth was revealed. It was quite engaging and kind of suspenseful, something you don't really come across that often in Contemporary novels of this nature. Seeing the author's take on such a sensitive topic was definitely thought provoking and I couldn't help but imagine myself in the main character's shoes, while wondering what choices I would've made in her place.

My biggest problem with this novel were the characters themselves. I did like Jules, even though I couldn't really relate to her since sometimes, I didn't really agree with her way of thinking and overall behavior. The rest of the characters were quite inconsequential and didn't really matter to me that much throughout the novel. I sincerely hope that doesn't make me a bad person. Luke was an okay main interest but, didn't really add much to the romance aspect with his personality because he just lacked that certain depth that makes readers ship couples and crust on fictional characters. Their romantic relationship, if there ever was one, was there one minute and then it just wasn't, which was quite frustrating.

There was so much more potential into the story that wasn't taken advantage of, something that became even more obvious with the ending. Even though Luke wasn't my ideal male character, I can't help but admit that I wasn't really satisfied with how things progressed with him and Jules. I feel like he could've been a bit more understanding and determined in helping her navigate through all these new discoveries and figure things out.

Overall, Relative Strangers was a good coming of age story that could've been much better with some slight changes! I loved the beginning but, after the initial shock of the unpredictability surrounding the whole family drama wore off, nothing managed to get me back on my toes and make things interesting again.