Hello guys and welcome to the official Blog Tour for Tessa Gratton's new novel, The Queens of Innis Lear! Make sure to enter the Giveaway at the end of this post and don't forget to read my thoughts on this Fantasy novel!

Title: The Queens of Innis Lear 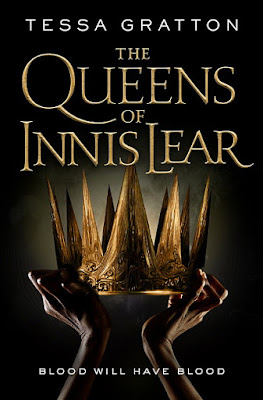 A kingdom at risk, a crown divided, a family drenched in blood.

The erratic decisions of a prophecy-obsessed king have drained Innis Lear of its wild magic, leaving behind a trail of barren crops and despondent subjects. Enemy nations circle the once-bountiful isle, sensing its growing vulnerability, hungry to control the ideal port for all trade routes.


The king's three daughters—battle-hungry Gaela, master manipulator Reagan, and restrained, starblessed Elia—know the realm's only chance of resurrection is to crown a new sovereign, proving a strong hand can resurrect magic and defend itself. But their father will not choose an heir until the longest night of the year, when prophecies align and a poison ritual can be enacted.


Refusing to leave their future in the hands of blind faith, the daughters of Innis Lear prepare for war—but regardless of who wins the crown, the shores of Innis will weep the blood of a house divided.

I was initially very excited for The Queens of Innis Lear but, I felt like it fell a bit short and didn't come close to my expectations. The major problem I had with it, if you can call it that, was the pace. It's no secret that I'm an adrenaline junkie and love fast paced books, especially when they're Fantasy! I can't stand slow paced novels and that's just a personal preference. Even tough this one had an extremely interesting premise, the story itself took such a long time to reach its peak. When it eventually did, the style of narration didn't really do it justice, which means that, I wasn't very satisfied by it. That's the truth of it.


The idea behind the novel was fascinating and the author managed to bring it to life with the poetic way she chose to narrate it. It was very well written and had a certain depth that didn't extend to more than its plot. The setting itself was quite dark which I really enjoyed because I haven't come across a lot of dark and twisted Fantasy novels recently. The magic aspect of it complimented the novel's atmosphere and was probably one of the best parts in it! It definitely stood out and felt very authentic, which is very difficult to achieve when it comes to tropes that have been used in books for decades, in various ways! If magic can be considered a trope, that is. The word for it doesn't really come to mind right now and I apologize for that!

The characters themselves were well thought out and I feel like each of them had one interesting feature and if you combined them all, you could create the ideal Fantasy hero/heroine. Individually though, they didn't really blow my mind with their originality. If they had been a bit more developed and less repetitive, they could have added so much more into the story! Because they had a certain depth and were quite interesting but, nothing stood out about most of them. I'm not going to talk about each and everyone of them because that would be pointless and full of spoilers so, I'll just tell you that I loved Ban. He was probably the most three dimensional character in the book and my personal favorite!

Even though the word building was beautiful, the narration got a bit too slow for my liking, which I've already mentioned because it's one of my least favorite things when it comes to Fantasy. It just kept dragging on, which was truthfully extremely tiring. I felt like it could've been much shorter and a lot more interesting if some parts weren't repeated throughout it and the climax wasn't so late to the party. Which leads us to the narration and how it didn't add anything to help it shine through. It just gave off a feeling of detachment that didn't make it easy to connect with the characters but, was interesting enough to make me keep reading. I did appreciate the surprises scattered throughout the novel though and how the story itself progressed.

Overall, The Queens of Innis Lear wasn't what I hoped it'd be when I first read its synopsis but, it was quite an interesting read. I liked the characters and the premise but, the pace was just not to my liking. It was very well thought out though and will definitely appeal to fans of Fantasy with a bit of a literal narration and historical elements. The premise and the magic aspect of it, as well as the action that arrived too late definitely stood out for me and would've loved it if they had dominated over the plot.

Tessa Gratton is the Associate Director of Madcap Retreats and the author of the Blood Journals Series and Gods of New Asgard Series, co-author of YA writing books The Curiosities and The Anatomy of Curiosity, as well as dozens of short stories available in anthologies and on merryfates.com. Though she’s lived all over the world, she’s finally returned to her prairie roots in Kansas with her wife. Her current projects include Tremontaineat Serial Box Publishing, YA Fantasy Strange Grace coming in 2018, and her adult fantasy debut, The Queens of Innis Lear, from Tor March 27, 2018.

a Rafflecopter giveaway
Posted by Book Lady's Reviews at 20:01