Blog Tour - By A Charm and A Curse By Jamie Questell {Review & Giveaway!}

I'm extremely excited to welcome you guys on my tour stop for By A Charm and A Curse, which was one of my February's most anticipated reads! Make sure to read my review on it and don't forget to enter the Giveaway at the end of this post!

Title: By A Charm and A Curse 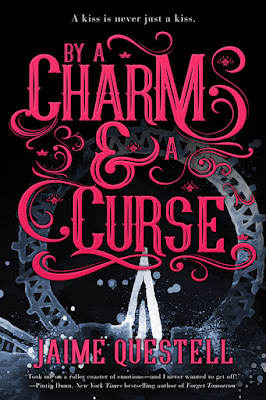 Le Grand’s Carnival Fantastic isn’t like other traveling circuses. It’s bound by a charm, held together by a centuries-old curse, that protects its members from ever growing older or getting hurt. Emmaline King is drawn to the circus like a moth to a flame…and unwittingly recruited into its folds by a mysterious teen boy whose kiss is as cold as ice.

Forced to travel through Texas as the new Girl in the Box, Emmaline is completely trapped. Breaking the curse seems like her only chance at freedom, but with no curse, there’s no charm, either—dooming everyone who calls the Carnival Fantastic home. Including the boy she’s afraid she’s falling for.

Everything—including his life—could end with just one kiss.

I was so excited when I started reading By A Charm and A Curse because, even though I'm not too fond of books with a circus setting, I was extremely intrigued by this and couldn't wait to get my hands on it!! I can't say that I went into it prejudiced or expecting to hate it but, I definitely had no idea that I would end up loving it! I got immersed in the story from the very beginning and fell in love with the fascinating world that I was introduced to in its pages. Throughout the novel, everything was so vivid and described in such great detail that I could actually feel the air simmer with the scents that come with carnivals and see the various acts in motion right in front of me!


I'm not going to get into great detail about the plot itself because it's too perfectly complicated for me to explain and you should definitely unravel its mysteries by picking up the book yourselves! The characters though, we're going to talk about because I connected with them from the very beginning and felt for them until the very end! Emma was tricked into a life she had no idea would change her and Ben was born in it. Both of them are obviously looking for a way out and fall in love in the process, which is not as simple as one would initially expect. The story itself is told from both their perspectives which made the experience of reading it even better! I immensely enjoy having the chance to see the world in each novel that I read, from different perspectives and it definitely makes things so much more interesting for me, as a reader!

I also felt like every single character developed so much throughout the course of the story and I was quite impressed by their depth and how three dimensional they slowly became! The secondary characters were extremely fascinating as well and added their own magic in each chapter! There are a lot of them but, they were so well written and I could tell them apart from early on! Their paths intertwined so smoothly with Ben and Emma's and their bond became much stronger as the story progressed! They, along with everything that happened throughout the novel, were so vivid inside my mind and I could not stop reading!

The story was immensely engaging and suspenseful, even though you can't really tell just by the synopsis. It was so much more than I thought it'd be and I couldn't have been more grateful for having the chance to read and review it! It was so unpredictable and some of the things that happened blew my mind because of how surprised I was! It was also very original and I don't think I've ever read something similar to it before! The idea behind it was phenomenal and I'm in awe of the author for managing to spun such a fascinating tale around and give us the chance to experience it! It was so unique and complicated, I wouldn't have had it any other way!

My only complaint was not having the opportunity to get a glimpse into Emma's life a bit more and get to know her as much as we did Ben! Other than that, everything about By A Charm and A Curse was simply perfect and my reactions to it are so much more expressive because of how little I expected because of the circus thing and all that! I finished in and just sat there staring into nothing because I couldn't believe its plot twists and the surprises that followed in their wake!

Overall, this was such a unique and wonderful story that kept me on edge from the very beginning! Every single thing that happened was very unexpected, the charm and the curse aspect of it was extremely clever and expertly woven around each other to form a fascinating tale of loss, love, regret and sacrifice! It was dark, it was raw and it felt real! I cannot recommend it enough!

Jaime Questell grew up in Houston, Texas, where she escaped the heat and humidity by diving into stacks of Baby Sitter’s Club and Sweet Valley High books. She has been a book seller (fair warning: book lovers who become book sellers will give half their paychecks right back to their employers), a professional knitter, a semi-professional baker, and now works as a graphic designer in addition to writing.

a Rafflecopter giveaway
Posted by Book Lady's Reviews at 21:46