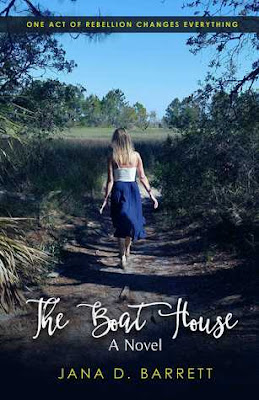 Genevieve Vandermere- Anderson lives in an elite world carefully crafted by her stepfather. While other girls her age are ecstatic to revel in the freedom of summer break from college, Genevieve is forced to return to her childhood home in Hilton Head, South Carolina to play sidekick to her vindictive stepfather. Forbidden from social media and isolated from her peers, she returns home from college, disheartened and oppressed by the actions of her past; the secret that her stepfather uses to control her.

Though she is fearful of the repercussions, Genevieve decides it is time to start making her own choices. She sneaks out of her fortified house to attend the annual beach bonfire. There she meets a handsome stranger and follows him to an abandoned boathouse hidden in low country marshes. Little does she know that this small act of rebellion will be the catalyst for unraveling the truth about her regretful past, and the layers of deception her stepfather has masterminded.

When she begins to investigate the boating accident that tragically killed her mother and two other people, she discovers that her stepfather's suspicious behavior and control tactics are all part of a greater agenda.

The Boat House was such s page Turner which, I wasn't really expecting when I started reading. The synopsis really intrigued me and since I've really been into Mystery lately, I decided to give it a go. I was not disappointed! It's definitely a book you have to go into without knowing too much about because, that'll just spoil the fun. So, I'm not going to be giving away anything that has to do with the plot in this review. What would be the fun in that, right? You'll just have to read it and find out how suspenseful it really is for your selves!

The storyline itself was quite intriguing and kept me on edge the entire time. The first couple of chapters were a bit slower than the rest but, they did a great job of introducing the characters and giving a small glimpse of what would follow. Even though it took me a while to connect with the characters, I really enjoyed how they developed throughout the book and by the end of it, I grew to like them more than I had expected. What Genevieve went through was heartbreaking and even though I couldn't relate to her, I felt for her and everything she was forced to endure. The cruelty of some people will never seize to amaze me and the author did a pretty good job of making sure of that! I feel like negative feelings while reading are as important as positive, when it comes to characters and the choices they make.

The writing was quite engaging and descriptive that, it made everything that was going on play out in my head like a movie. Such vividness in books always makes the experience of reading even more enjoyable and satisfying for me, as a reader and it's something that I definitely felt while reading this book. Moreover, there were so many unpredictable twists and turns I never saw coming that, I was actually overwhelmed by it all. In a good way of course! Also, the many revelations unraveled through the pages of this book were so shocking and difficult to comprehend that, I had to take a couple of minutes to regroup and find my bearings after finishing.

Overall, The Boat House was so much better than I'd hoped it'd be and I cannot recommend it enough. The Mystery which drew me to it from the very beginning wasn't overshadowed by anything else, which is very common when it comes to the Genre itself! Something that I immensely appreciated and look forward to coming across in books more often!

Jana was born and raised in Charlotte, North Carolina.   An avid reader, she loves to travel, cook and try exotic foods.  She is a self- proclaimed 'city girl' who fell in love with a country boy.  Jana, her husband and their daughter live on a retired pasture, with a lovely farmland view.  An animal lover she has Siberian Husky named Blizzard, a barn kitty named Winter and an impolite group of wild turkeys.
{Website | Goodreads | Facebook}

a Rafflecopter giveaway
Posted by Book Lady's Reviews at 11:56