Hello guys and welcome to the last part of February's most anticipated book releases! I'm extremely excited to be sharing with you all the books I'm looking forward to and I hope you add the ones that interest you on your TBR lists! Also, make sure to leave the ones you're most excited for in the comments below!

Don't forget to check out

I've had my eye on this series for ages and I think I want to start with this one, since it sounds just a tad more intriguing than the previous two. It's a stand - alone/companion so, there's no issue with starting backwards! According to the author, it's based on an old Arabian tale called The False Prince, with a a dash of The Prince and the Pauper!

*The Queen's Rising By Rebecca Ross

Another Fantasy novel with an intriguing story line, The Queen's Rising follows Brienna, whose only purpose is to find a suitable patron and master her passion during her seventeenth solstice! When none of that happens and things don't go according to plan, she's left feeling dejected and alone. That is until a disgraced lord offers her patronage and she eventually discovers that his motives are more devious than she'd expected. I'm pretty sure this is a debut novel and even though Goodreads doesn't say so, I think it's going to be a series.

I still have not managed to get my hands on Daughter of the Pirate King but I've been hearing the best things about it and the release of the sequel is definitely making me itch for it! Let me know if you guys have read it and whether you enjoyed it or not!

Another popular series I'm seriously debating on whether to start and actually commit to or not! I don't know if this is the last book in the series but I think I'm intrigued enough to actually start it very soon! Fantasy is definitely one of my favorite Genres so, I might risk it and pick up Falling Kingdoms! 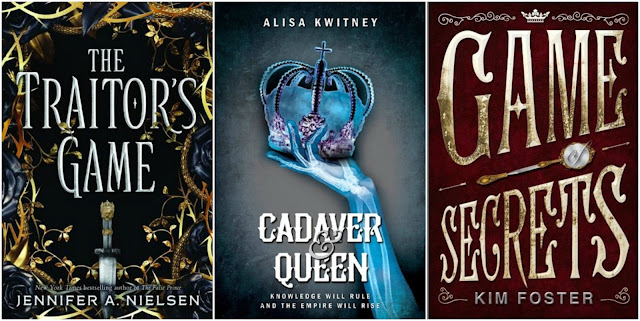 I've never read anything by Jennifer A. Nielsen before but, she has another series I'm definitely interested in picking up sometime soon! The Traitor's Game follows our main characters Kestra, who is the daughter of the king's right hand man and has spent the least three years living in exile. On the way back to the kingdom, she is snatched by rebels who want her to retrieve the only object that can kill the immortal king! Sounds like my cup of tea, folks!

I stumbled upon this one completely by accident while browsing through Goodreads - like usual - and I was immediately sold on its plot! It's actually a re-telling of Frankenstein and it truly sounds so unique and different from anything I've read before! Definitely read the synopsis of this one, you won't regret it!

*Game of Secrets By Kim Foster

The kindle edition of this one comes out during February but, I thought I'd add it anyway since it's technically a February release! It seriously sounds like what dreams are made of! My favorite Genre mixed with Historical Fiction, which I became extremely fond of recently will definitely make for an interesting and fascinating read! 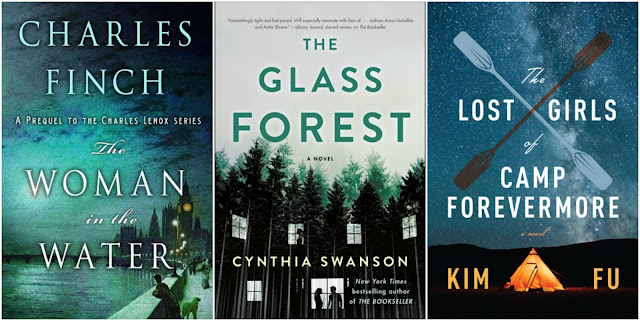 This is kind of a prequel to the series as a whole. There are more than ten books in this Mystery series and The Woman in the Water tells the story of the detective's first case! It's set in the 19th century and follows a young Charles Lenox, who's trying to make a name for himself as a detective and prove that he can turn it into an actual profession!

*The Glass Forest By Cynthia Swanson

I've really started to go out of my comfort zone and try to read some Crime/Thriller books recently, which has worked out perfectly so, I definitely want to add more to my list and expand my horizons, if we can put it that way! This could definitely be a movie because it sounds super creepy and terrifying so, I'm pretty sure that's a good thing because it serves its purpose, just by that synopsis!

*The Lost Girls of Camp Forevermore By Kim Fu

This isn't necessarily a book I'd usually go for but, it does sound like something I'd be interested in picking up sometime, in the future. It follows the lives of five girls, who get stranded on an island and it changes their lives forever! 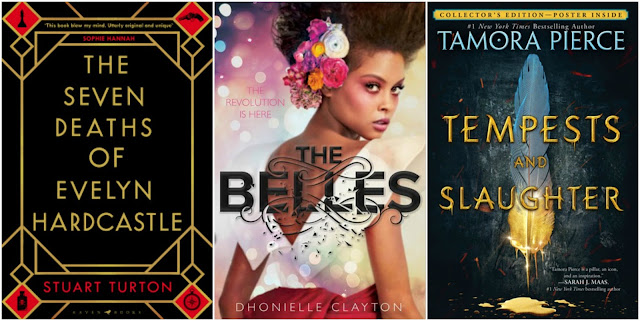 *The Seven Deaths of Evelyn Hardcastle By Stuart Turton

This one reminds me of Happy Death Day, which was surprisingly entertaining if any of you guys have watched it so, I'm really interested in reading it soon! Our main character whose name is quite obvious, keeps getting killed and the only one who can save her, gets there too late every single time. His only escape from repeating the day of Evelyn's death, is to actually solve her murder. Doesn't it sound amazing?

This is another one I keep seeing around the book community recently and I'm quite intrigued. Belles basically control Beauty and our main character is one of them! They help people transform and basically make them beautiful. But, only one of them can be the Queen's favorite, the ultimate Belle, who'll get to live in the palace and treat the royals! But, there are many secrets hidden behind the palace walls and appearances can definitely be deceiving!

*Tempests and Slaughter {The Numair Chronicles #1} By Tamora Pierce

Tamore Pierce is a very well known author and it's a shame tat I haven't read any of her books yet. Her newest release follows a boy on the path of becoming one of the realm's most powerful mages. I'm pretty sure this is a prequel series to one of her other series but, I haven't read any of them so, I can't be completely sure. The synopsis says that, this is a never before told story of a character who I assume was introduced in one of he previous series and you probably have to read that one first before move on to Tempests and Slaughter.

That was it for next month's most anticipated book releases, guys! I hope you enjoyed this post and found it helpful, if not overwhelming. IN a good way, of course! Make sure to check out the links to Parts 1 & 2 and stay tuned for March's most exciting book releases which will be posted very soon!