Clutch – verb: to grasp and hold tightly; to seize; snatch. 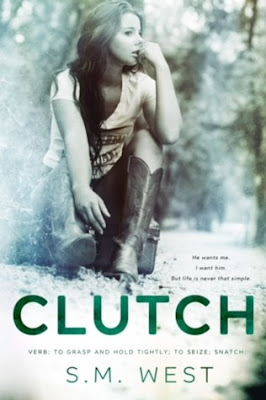 Flighty. Stupid. That’s what my sisters think of me.

I’m tired of being misunderstood.

With a suitcase in hand and the ocean as my beacon, I’m charting my own path.

Yet, barely a day on the road, I almost crash and burn.

And even now, when he’s abandoning fame and fortune, he knows what he wants.

But life is never that simple.

*I received this book from NetGalley in exchange for an honest review. All thoughts and opinions are my own.*

Clutch follows the fascinating and swoon worthy story of Silas and Pansy, whose paths intertwine in a very unconventional and unexpected way. He's a notorious rock star and heartthrob, whose tired of his lifestyle and wants out of the band that made he famous. And she's a wild, untamed soul who's in constant search of her own destiny, even though her family openly disapproves of her impulsive ways. Their meeting was spontaneous and marked the beginning of their beautiful and bumpy relationship.

I loved Silas and found him to be very charming, as a main character. Even though he let his anger control him at times, he acknowledges his mistakes and apologizes for them as soon as they happen. Which isn't a trait you'd expect from anyone, much less a famous super star who's used to getting everything he asks for. He has his flaws, that's for sure but, that's what makes him even more relatable than he started out to be. Also, the vulnerability he displayed when he was with Pansy made me swoon and restored my faith in love altogether. Completely impossible to resist, in other words.

Pansy was such a unique and feisty character, I fell in love with her unconventional ways from the moment I started reading Clutch. She doesn't go by the rules and obviously refuses to conform to society's portrayal of how life should be lived. She's never afraid to stand up for her self and what she believes in, which makes her one of the most honest and blunt heroines I've read about in a while, when it comes to novels of the New Adult Genre. You cannot help but envy her soul searching journey, wishing upon a thousand stars that, you had the guts to pursue it yourself. This need to get  away from the things that made me unhappy grew withing me after every chapter of this book and I couldn't have been happier for Pansy and the fact that, she was such a rebel in her own way and only settled for the things that truly mattered!

They're both determined to make things work and go through thick and thin to ensure each other's happiness! Pansy's determination to find her happy beginning was truly refreshing and going along for the journey was more than enjoyable! Also, I felt like the author gave a different insight to life than what we're usually used to in Romance Novels, which I was all in for because there are times when I don't know where my life is going either. And it's completely normal, by the way. It shouldn't scare you nor be the excuse people need to criticize and shame you. So, it was nice to relate to a main character on such a level and see my thoughts and uncertainty reflected in her words. It was a perfect representation of reality itself and how sometimes, we all struggle with finding our path in life, even if we're actual adults. I'm always going to be a child inside my head people, just a side note.

The secondary characters were a nice addition to the story and I get really excited with the prospect of more books being written about them. I have no idea if that's going to happen, by the way. Just throwing it out there. Moreover, the writing was great and the story itself was fast paced without feeling rushed whatsoever. Which is always the perfect combination for me, as a reader. The ending came quicker than I was expecting but, it was still satisfying and I got all sorts of fuzzy feelings inside my little romantic heart with the way the author decided to wrap things up!

Overall, if you enjoy hopelessly romantic stories about characters that are the complete opposite of each other, I suggest you pick up Clutch immediately! I thoroughly enjoyed it and it pleasantly surprised me with its character development and the way it progressed. There weren't any plot twists but, it managed to grab my attention from the very first chapter. I could not stop reading it and finished it in like, a day! Highly recommend!