Title: Murder on the Orient Express 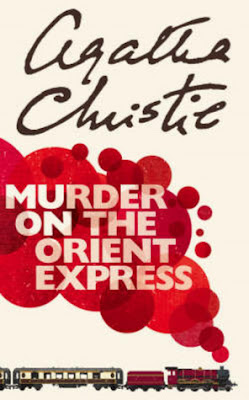 "The murderer is with us - on the train now..."Just after midnight, the famous Orient Express is stopped in its tracks by a snowdrift. By morning, the millionaire Samuel Ratchett lies dead in his compartment, stabbed a dozen times, his door locked from the inside. One of his fellow passengers must be the murderer.Isolated by the storm and with a killer in their midst, detective Hercule Poirot must find the killer amongst a dozen of the dead man's enemies, before the murderer decides to strike again...

Murder on the Orient Express is a masterpiece. Let's just start with that. And Agatha Christie is probably the most Brilliant Woman Mystery Author - all of these together and individually - to ever walk this earth. Because what I just read, was out of this world. Blew my mind and made me giddy with excitement. I love Mystery in all its forms and watching/reading Crime everything, is a way of life for me. And I'm extremely ashamed of myself for not picking up an Agatha Christie book sooner. I've lost count of how many times I actually watched every single episode of Agatha Christie's Poirot and Marple and they hold a very special place in my heart. They are old and stable favorites of mine, along with Sherlock Holmes! But, even though I've re-read Sherlock multiple times, I failed to do the same with Agatha Christie's novels. In honor of the movie coming out this year though and the fact that this particular book was thrust upon me rather unexpectedly, I decided to read it. And I was definitely not disappointed! Because Hercule Poirot is as brilliant as the woman who brought him to life in front of our eyes and made him one of the most famous detectives.


I feel like he is a bit underestimated because, a lot of people expect him to be boring and see the supposed lack of action in his novels as an indicator of a slow pace and a boring development. That couldn't have been more far from the truth. The way every single event takes place in that train and how Poirot manages to connect the dots and come to that brilliant - I keep using this word because it's the most suitable to describe every single aspect of this book - and unexpected conclusion, is beyond me. I spend the majority of the book trying to figure out what really happened. That's what everyone who loves mysteries would do, when faced with such a fascinating case. The infamous Orient Express stopped in the middle of nowhere and couldn't move forward and reach its destination because of the snow that covered the tracks. And the victim's doors were locked from the inside. Everyone seemingly had an alibi and nothing made sense. In the beginning that is.

The way things develop and how the plot moves forward is simply perfect. It will definitely satisfy everyone's inner detective and keep you on the edge of your seat until everything is revealed, at the very end of the book. I had so much to do but still, managed to finish this one in less than two days because I simply could not put it down without finishing it. It was extremely addictive and the fact that, there are so many more Agatha Christie novels waiting for me to devour them, fills me with the best feeling of excitement and anticipation!

I did't want to get too much into the story line because, this is a book you have to read without reading any reviews of the sort for. So, stay away from spoilers if you're truly interested in it please! That's how you'll enjoy it to its full capacity! I watched the trailer for the movie and it was intriguing but, I don't know if I want to watch it now that I've finally read the book. I know that the cast is very different in appearance from the book's characters and some names have changed but, I have no idea how much the movie's plot is different from that of the book.

Overall, I cannot recommend this one enough! It's definitely a classic in the world of literature - like most of Christie's novels - and everyone who loves Crime and Mystery needs to read it!