Elena Reviews: Moxie By Jennifer Mathieu {A book you NEED TO READ!} 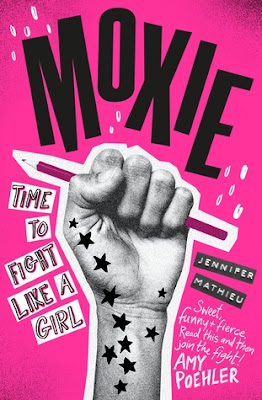 Viv's mum was a tough-as-nails, punk rock Riot Grrrl in the '90s, and now Viv takes a page from her mother's past and creates Moxie, a feminist zine that she distributes anonymously to her classmates. She's just blowing off steam, but other girls respond and spread the Moxie message. As Viv forges friendships with other young women across the divides of cliques and popularity rankings, she realises that what she has started is nothing short of a girl revolution.

A page-turning read with a feminist message, for anyone who has ever had to deal with #everydaysexism.

Moxie is one of those books you don't really know you need in your life, until you actually read it! It's beautifully written, poignant and determined to open your eyes and make you realize the unfairness of the world we live in. It has a very important purpose that, it achieves just by being written and published. It's a beautiful story that hits very close to home and is extremely relatable! It dives into the huge importance of feminism and its ultimate goal is to empower and encourage women to fight for what they believe in and support each other, no matter where they come from, what color their skin is and what their interests are. It's also a perfect reminder for every single one of us who might feel powerless and unheard, to raise our voices and show the world what we're made of!

Moving on to the characters of Moxie. Vivian was the perfect representation of an every day girl, struggling to be heard and fighting every day for what she believes in. She's determined to see things through and make people realize that, what is going on is definitely not OK, even if her friends and the people around her aren't very supportive of feminism and what it really stands for. Either because they don't get it and think everything that is going on in their town is perfectly normal, or because they're just afraid. Communities as the one described in Moxie aren't the most accepting when it comes to things like equality and standing up for what you believe in, which is made perfectly clear from the very first pages of the book. That is what makes Vivian one of the most revolutionary character in YA contemporary. She's passionate and her arguments are very well thought and expressed throughout the book. She stands by what she believes in and wants to rebel against the wrong kind of ''traditional'' because it's degrading and revolting to even think about.

I also loved Seth and the rest of the novel's secondary characters. Girls that might or might not have anything in common, come together in an effort to support each other and raise awareness!I began with Seth's name because he was also a very important character in Moxie. He might be so different from all the assholes that attend East Rockport High and perfect for Vivian but, at the same time, he doesn't fully understand what Vivian is trying to accomplish, because he's never been through it. It's the perfect example of how men do not understand the lack of equality and how that affects women and their quality of life. Seth has never experienced sexism and has never been underestimated just because of his gender. Which, unfortunately, is something that many girls have faced and continue facing in their social and every day lives. But, regardless of all that, he's very supportive of Vivian's efforts and he tries to understand what it all means to, not only her but every single girl at their High School. I really admired their respect for each other and the fact that, they try to work out their problems and talk through whatever is bothering them. It was a very mature approach to their relationship, which isn't something you come across very often in Contemporary Young Adult novels.

Moxie brought together girls from different cliques and social statuses, girls of different color and races and made them work together and stand together for what they believed it. It's the perfect definition of feminism and it addresses it in the best way possible. It also shows the huge importance of coming together and supporting each other, instead of being against each other. The characters Jennifer Mathieu brought to life in this novel, are definitely ones that readers can relate with but also look up to. Which is extraordinary! Diving deeper into the structure of the novel itself, it's made quite clear that, ''white feminism'' has a lot of problematic aspects and Vivian makes sure to address and demystify them, in a way. People and especially women of color, are at a disadvantage when it comes to dealing with sexism and everything that undoubtedly comes with it. ''Moxie'' is inclusive and wants to make sure that, everyone feels supported and everyone can and will be heard!

Moxie made me feel a lot of things while reading it. Sad, overwhelmed, frustrated, happy but most of all, hopeful. Because if we're passionate enough to fight for what we believe in and for everything that we deserve, WE CAN CHANGE THE WORLD! Together! It might take a while, as history and the past have obviously shown us but, it will happen! This is a book full of encouragement and empowerment, a book everyone who believes in the chance of a better world MUST read! It's fast paced - I actually read it in a day because I could not put it down - enjoyable but, most of all, didactic! I cannot recommend it enough. And just remember this: ''MOXIE GIRLS FIGHT BACK!''