Elena Reviews: The Falconer By Elizabeth May 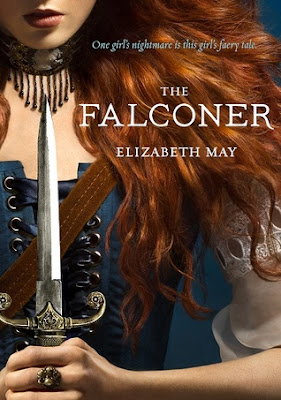 One girl's nightmare is this girl's faery tale

She's a stunner.
Edinburgh, 1844. Eighteen-year-old Lady Aileana Kameron, the only daughter of the Marquess of Douglas, has everything a girl could dream of: brains, charm, wealth, a title—and drop-dead beauty.

She's a liar.
But Aileana only looks the part of an aristocratic young lady. she's leading a double life: She has a rare ability to sense the sìthíchean—the faery race obsessed with slaughtering humans—and, with the aid of a mysterious mentor, has spent the year since her mother died learning how to kill them.

She's a murderer.
Now Aileana is dedicated to slaying the fae before they take innocent lives. With her knack for inventing ingenious tools and weapons—from flying machines to detonators to lightning pistols—ruthless Aileana has one goal: Destroy the faery who destroyed her mother.

She's a Falconer.
The last in a line of female warriors born with a gift for hunting and killing the fae, Aileana is the sole hope of preventing a powerful faery population from massacring all of humanity. Suddenly, her quest is a lot more complicated. She still longs to avenge her mother's murder—but she'll have to save the world first.

The first volume of a trilogy from an exciting new voice in young adult fantasy, this electrifying thriller combines romance and action, steampunk technology and Scottish lore in a deliciously addictive read.

I kept seeing the same copy of this book at the bookstore for more than two years and every time I went to stare at the beautiful books and decide which one to take home with me, I stared at it in longing and was so close to purchasing it. I never did, until now. I just wasn't sure about it and the reviews were kind of mixed up so, I didn't know whether I'd ever be in the mood to actually read it. But I really wanted to read something different and since I was in the process of completely falling into a reading slump, I decided to finally pick it up and started reading it immediately.

After that small introduction to how The Falconer ended up in my hands after such a long time of sitting on that same bookshelf, feeling utterly neglected and alone, it's time for the actual review. First of all, the story itself was so unique and it got me completely hooked from the very beginning, which was exactly what my little heart needed to fill with excitement and adrenaline over what would happen next. The world Elizabeth May introduced me to in this book was so fascinating and intriguing that, I could not get enough of it. I feel like this was just an ''introduction'' to what will follow, especially considering the ending which was quite unpredictable!

I honestly did not expect for this book to blow my mind as much as it did. Aside from being beautifully written, it was very original and well thought of. It is a steampunk novel, which I was not expecting since I thought it was simply categorized as Historical Fiction and Fantasy. It gives readers a peak into how ladies were supposed to act all proper and feminine back in the day and marry a suitable husband as soon as possible. They couldn't be seen doing anything inappropriate, that would ruin their reputation and chase off all potential suitors, which is extremely ridiculous if you ask me.

Aileana or Kam, our main character, is a lady by day and a Fae assassin by night, which is quite extraordinary and completely improper, since disappearing from balls has become a dangerous habit that stirs up a lot of controversies about her and keeps the rumors going. That is because Kam is a Falconer, which means that she is the only one capable of killing the Fae and keeping them from escaping their two thousand year prison.

Which is where Kiaran comes in. Drumroll please, because the guy is PERFECT. He's mysterious, he's surrounded by darkness and he's super duper hot. I couldn't stop swooning over this guy throughout the whole book and fawn over how perfect he was for Aileana. I prayed for a miracle that would make him kiss her and I just about screamed from excitement when that particular prayer got answered at the last couple of chapters. Hope dies last people. His secrecy was very frustrating, but it just added to the mystery of the book itself and kept me on edge the whole time. Not much was revealed about him, which makes me even more desperate to get my hands on the sequel!

The secondary characters were as perfect as the main. Catherine, who was Kam's best friend, was okay but, I just feel we really didn't get to know her that much and she kind of faded in the background. I wish she would've been a bit more involved in the plot and everything that was going on but, everything happens for a reason. Her brother, Gavin, was introduced much later in the story, but I feel like he was much easier to connect to because of his involvement. Both characters were very likable and I can't wait to see what the author has in store for them in the rest of the books!

I've left the best for last, because we all know that life is not complete, without a pixie best friend to guide you through it. I absolutely adored Derrick. I fell in love with him from the moment he was introduced and wanted to smother him with hugs and everything of the sort. He's one of those characters - tiny as he is - you don't really know that you need in your life, until he becomes a part of it. Just like that. He is one of the most magical, loyal, fierce and protective little fellas that have ever existed in literature. Hands down, one of the best characters I've ever been introduced to in a book. I seriously could not get enough of him and my heart was ready to melt at how much he cared for Kam. Definitely a force to be reckoned with.

Before I finish writing this review, I just want to talk about the **** rating. I just felt like the end was too abrupt, especially because the author had been preparing us, in a way, from the beginning. The fighting scenes in general were so well written, vivid and full of action, which was also the case for the last chapters of the book. My only issue is that, everything led up to this extremely important moment in time, just for it to end way too abruptly for my liking. Plus, just a warning for you guys, there is a major cliffhanger which has obviously has left me hanging by a thread and desperately needing to get my hands on The Vanishing Throne.

Overall, if you ever come across The Falconer, do not, I repeat, DO NOT HESITATE TO PICK IT UP! It definitely blew my mind with its originality, wonderful and poetic writing, fascinating plot and intriguing, well developed characters! I cannot recommend it enough and I'm sure that, if you're a fan of Historical Fiction and Steampunk, you'll definitely fall in love with the world Elizabeth May has created!