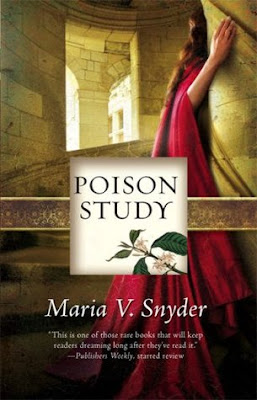 About to be executed for murder, Yelena is offered an extraordinary reprieve. She'll eat the best meals, have rooms in the palace—and risk assassination by anyone trying to kill the Commander of Ixia.

And so Yelena chooses to become a food taster. But the chief of security, leaving nothing to chance, deliberately feeds her Butterfly's Dust—and only by appearing for her daily antidote will she delay an agonizing death from the poison.

As Yelena tries to escape her new dilemma, disasters keep mounting. Rebels plot to seize Ixia and Yelena develops magical powers she can't control. Her life is threatened again and choices must be made. But this time the outcomes aren't so clear...

Let me start by saying that, I try to re-read the series at least once a year. Which might sound crazy but this is at the very top of my favorites list and I'm completely addicted to it! If you've been following me and this blog for a while, you probably have seen all three books featured in various posts already. You might want to get used to me mentioning them all the time if you haven't yet. The main reason why I want to re-read the trilogy again - more than anything - is to finally get my hands on the rest of the books that were quite recently published, devour them and be happy! Moving on to the actual review, I'm going to try and make it as brief as possible. I love Yelena and her character development throughout the books is more than impressive! She has a fierce heart and mind from the very beginning, she's loyal, brave and basically a kick-ass. And please don't get me started on Valek. I love that guy! I probably would've been head over heels in love with him if he actually existed. He is my favorite fictional boyfriend though. Even if he comes off as being very serious, closed off and basically a jerk, he's such a caring softie under the surface.As for Ari and Janco, I'll never get tired of reading about their bickering and fighting and everything else that makes them who they are. I just love those guys to pieces and would have loved it if they were my best friends. Seriously! They're so protective, extremely loyal and more than entertaining! The plot itself never gets boring or repetitive and you definitely will not want to put the book - any book of hers really - down, once you start reading. It's unique, fascinating and more than interesting! The story an its flow are more than enjoyable and I've been obsessed with them since the first time I got my hands on them, read them and fell in love with Fantasy! This series was kind of like a starting point for my love for the genre and I cannot get enough it. It's my weakness and each time reading it is a completely new experience! Maria V. Snyder's books are just...magical! Her writing is beautiful and makes everything seem so real and vivid inside your head. Her stories never fail to blow my mind and I cannot recommend them enough! If you're a fan of Fantasy and you haven' t picked this series up yet, well...Seriously?!