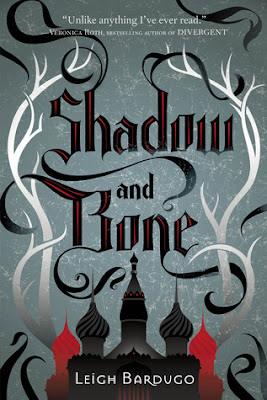 Surrounded by enemies, the once-great nation of Ravka has been torn in two by the Shadow Fold, a swath of near impenetrable darkness crawling with monsters who feast on human flesh. Now its fate may rest on the shoulders of one lonely refugee.

Alina Starkov has never been good at anything. But when her regiment is attacked on the Fold and her best friend is brutally injured, Alina reveals a dormant power that saves his life—a power that could be the key to setting her war-ravaged country free. Wrenched from everything she knows, Alina is whisked away to the royal court to be trained as a member of the Grisha, the magical elite led by the mysterious Darkling.

Yet nothing in this lavish world is what it seems. With darkness looming and an entire kingdom depending on her untamed power, Alina will have to confront the secrets of the Grisha . . . and the secrets of her heart.

Shadow and Bone is the first installment in Leigh Bardugo's Grisha Trilogy.

I've had Shadow and Bone on my shelves for ages. Literally! And I've actually picked it up a couple of times and was in the process of starting it but, for some stupid reason, I always put it back on my shelves. Huge mistake! But I guess everything happens for a reason, right?I absolutely adored this! I did not expect to love it this much, even though I've always found the idea behind it more than intriguing. It's just that, it's been a very long time since I've read a fantasy book and fell in love with it. I found the first couple of chapters to be quite slow but, after I pushed through them, I was hooked and could not stop reading. I guess it makes sense since, this is the first book in a series and the author had to introduce the world and the characters so, I would definitely recommend to keep on reading if you feel the same way! It's not that they weren't enjoyable or anything. On the contrary, they were very interesting to read, but I guess I'm too much of an action/adrenaline junkie for my own good. With that being said, after I really got into the story, I had to know what would happen next. It was almost impossible for me to put this book down and if it weren't for the countless assignments I have to complete, I would've have finished it way sooner than I did. Just getting that out there because I'm feeling quite frustrated and overwhelmed right now. Shadow and Bone was also one of the most beautifully written books I've ever read. I loved the world building and the way it added so much more into the story! The way the plot developed was completely unpredictable and I loved every single twist and turn the author decided to throw my way! The world of the Grisha was more than fascinating to enter and learn about! Leigh Bardugo did an amazing job at creating a world full of magic, mystery and adventure! Moving on to the characters, I loved every single one of them. Well, except from the Darkling of course, who I will get to later on in this review. Let me start by saying that, Aline was a very misunderstood character. In her mind, she never had a bright future and was perfectly fine with being a mapmaker - at least that's what she kept telling herself - but fate had other plans for her. I also felt very bad for her because she kept suppressing who and what she truly was, without even realizing it. I really enjoyed reading this story from her perspective and was able to connect with her as a character, which is something I'm always looking forward to when starting a new book. I really got invested in her character as I kept reading and immensely enjoyed watching her grow into herself, becoming more confident and embracing her true self and powers. She really developed throughout the story but, she was far from perfect. She had her flaws and still struggled with herself but, she fought so hard to become a better person and do the right things which is admirable! Moving on to Mal. I liked him but, I didn't connect with him as much as I had hoped. He was a very likable character and played a big role in the ending of the book itself but, I feel like I didn't get to know him as much as I did the rest of the characters. He was introduced as Alina's childhood friend - her only real friend - who she basically had a huge crush on but, he was to ignorant to realize it. I couldn't really form a complete picture of him inside my head but, I'm definitely getting there. Which brings me to the Darkling. I feel like he's one of those characters you absolutely hate upon realizing he's actually super evil and wants to destroy the world but, secretly, you can't help but fall in love with him. Yes, at the beginning, I fell in love with the Darkling. He's exactly the kind of guy I would have been attracted to. He comes of as a mature and tortured soul, who is extremely tired of watching the world fall apart. He's also sick of watching from the side lines and not being able to change anything, even though he's the most powerful person on earth. But, he obviously has huge plans in order to turn things around and make everything better.He's so convincing and likable from the very beginning of the book, even though deep inside you know for sure that, something very fishy is going on with him. He knows what he wants and he sure as hell knows how to go after it and make it his. That's what he basically does in Alina's case. She falls for his charms and the fact that someone like him, would notice someone like her. I don't know whether he's honest or if he truly has feelings for her but, at the beginning I actually shipped them as a couple. The ending obviously changed my mind and I really wish justice will be served sometime during the rest of the books in the series! Overall, Shadow and Bone was an immensely enjoyable read that had me hooked. It has its flaws but, it's definitely worth reading. And, it's definitely perfect for fans of YA Fantasy! I truthfully regret not picking it up sooner!

Hope you found this review helpful! Let me know if you've read Shadow & Bone and whether you enjoyed it or not!
Posted by Book Lady's Reviews at 23:46