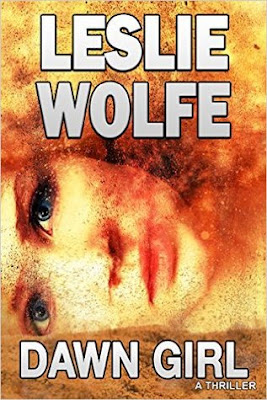 A GRIPPING SERIAL KILLER THRILLERHer blue eyes wide open, glossed over. A few specks of sand clung to her long, dark lashes. Her beautiful face, immobile, covered in sparkling flecks of sand. Her lips slightly parted as if to let a last breath escape.Who is the beautiful girl found at dawn, on a deserted stretch of white sand beach? What is her secret?FBI Special Agent Tess Winnett searches for answers relentlessly. With each step, each new finding, she uncovers unsettling facts leading to a single possible conclusion: Dawn Girl is not the only victim. Her killer has killed before.Hiding a terrible secret of her own, Special Agent Tess Winnett faces her inmost fears, in a heart-stopping race to catch a killer who’s getting ready to end yet another life. Will she find the killer in time? Will she be able to stop him? At what cost? The rules of the game have changed. So has the textbook definition of a serial killer.Special Agent Tess Winnett is the bold, direct, and short-fused heroine of Dawn Girl. Putting her life on the line, she doesn’t pull any punches, searching only for the truth, and for the man who takes lives on her watch. Intelligent, resourceful, and uncompromising, Tess will take readers on a memorable, white-knuckled journey in this suspenseful, gripping serial killer thriller.

She made an effort to open her eyes, compelling her heavy eyelids to obey. She swallowed hard, her throat raw and dry, as she urged the wave of nausea to subside. Dizzy and confused, she struggled to gain awareness. Where was she? She felt numb and shaky, unable to move, as if awakening from a deep sleep or a coma. She tried to move her arms, but couldn’t. Something kept her immobilized, but didn’t hurt her. Or maybe she couldn’t feel the pain, not anymore.

Her eyes started to adjust to the darkness, enough to distinguish the man moving quietly in the room. His silhouette flooded her foggy brain with a wave of memories. She gasped, feeling her throat constrict and burning tears rolling down her swollen cheeks.

Her increased awareness sent waves of adrenaline through her body, and she tried desperately to free herself from her restraints. With each useless effort, she panted harder, gasping for air, forcing it into her lungs. Fear put a strong chokehold on her throat and was gaining ground, as she rattled her restraints helplessly, growing weaker with every second. She felt a wave of darkness engulf her, this time the darkness coming from within her weary brain. She fought against that darkness, and battled her own betraying body.

The noises she made got the man’s attention.

“I see you’re awake. Excellent,” the man said, without turning.

She watched him place a syringe on a small, metallic tray. Its handle clinked, followed by another sound, this time the raspy, telling sound of a file cutting through the neck of a glass vial.

Then a pop when the man opened the vial. He grabbed the syringe and loaded the liquid from the vial, then carefully removed any air, pushing the piston until several droplets of fluid came out.

Dizziness overtook her, and she closed her eyes for a second.

“Shit,” the man mumbled, then opened a drawer and went through it in a hurry.

She felt the needle poke deeply in her thigh, like it was happening to another person. She felt it, but distantly. She perceived a subdued burning sensation where he pushed the fluid into her muscle, then that went away when he pulled the needle out. She closed her weary eyes again, listless against her restraints.

The man cracked open ammonia salts under her nose, and she bounced back into reality at the speed of a lightning strike, aware, alert, and angry. For a second she fought to free herself, but froze when her eyes focused on the man in front of her.

He held a scalpel, close to her face. In itself, the small, shiny, silver object was capable of bringing formidable healing, as well as immense pain. The difference stood in the hand wielding it. She knew no healing was coming her way; only pain.

“No, no, please…” she pleaded, tears falling freely from her puffy eyes, burning as they rolled down her cheeks. “Please, no. I… I’ll do anything.”

“I am ready,” the man said. He seemed calm, composed, and dispassionate. “Are you ready?”

“Yeah,” he said softly, almost whispering, inches away from her face. “Please say no to me. I love that.”

Bestselling author Leslie Wolfe is passionate about writing fiction, despite spending a significant number of years climbing the corporate ladder. Leaving the coveted world of boardrooms for the blissful peace of the Florida-based "Wolves’ den," Leslie answers one true calling: writing. Leslie’s novels break the mold of traditional thrillers. Fascinated by technology and psychology, Leslie brings extensive background and research in these fields that empower and add texture to a signature, multi-dimensional, engaging writing style. Leslie released the first novel, Executive, in October 2011. It was very well received, including inquiries from Hollywood. Since then, Leslie published numerous novels and enjoyed growing success and recognition in the marketplace. Among Leslie’s most notable works, The Watson Girl (2017) was recognized for offering a unique insight into the mind of a serial killer and a rarely seen first person account of his actions, in a dramatic and intense procedural thriller.A complete list of Leslie’s titles is available at http://wolfenovels.com/titles.Leslie enjoys engaging with readers every day and would love to hear from you. Become an insider: gain early access to previews of Leslie’s new novels