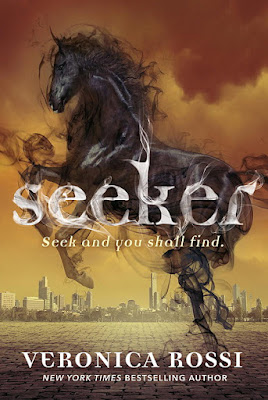 When Daryn claimed she was seeing visions during her sophomore year of high school, no one believed the truth. She wasn't losing her mind, she was gaining the Sight the ability to see the future. If she just paid attention to the visions, they'd provide her with clues and show her how she could help people. Really help them. Daryn embraced her role as a Seeker. The work she did was important. She saved lives.Until Sebastian.Sebastian was her first and worst mistake.Since the moment she inadvertently sealed him in a dark dimension with Samrael the last surviving demon in the Kindred guilt has plagued her. Daryn knows Sebastian is alive and waiting for help. It's up to her to rescue him. But now that she needs the Sight more than ever to guide her, the visions have stopped.Daryn must rely on her instincts, her intelligence, and on blind faith to lead the riders who are counting on her in search of Sebastian. As they delve into a shadowy realm where nothing is as it seems and where Samrael is steadily amassing power, Daryn faces the ultimate test. Will she have to become evil to destroy evil? The very fate of humankind rests in the answer.

First of all, I want to start by saying that, even though it's not necessary to read Riders in order to pick up Seeker, I would definitely recommend it! It would have been very helpful if I personally had read Riders first so, I feel like this is something I have to clarify before moving on to the review.

I really found the idea behind this book very unique and fascinating. It's completely different from anything I've read in the past so, I really wanted to give it a try and see whether I'd enjoy it or not. Thankfully, it did not disappoint. I found it very enjoyable and interesting to read. The world building was amazing and the story developed in a way that kept me -mostly - on edge.

Also, I found the characters to be very likable and easy to connect with. Which is very important for me, as a reader! They were very well written, which I feel like made the development of the story so much better and captivating. The book itself is told from both Daryn and Gideon's perspectives, who are our main characters in Seeker. I loved each of them for different reasons and loved their relationship and how it progressed even more.

Daryn is such a bad ass heroine! I can never get enough of them by the way! She has so many great qualities but, she also has her flaws, which is something that makes her even more relatable and easy to identify with. She's such a fierce heroine, which makes you so much more invested in her and her loyalty and determination to right the wrongs of the past and save humanity in the process. Gideon is also a wonderful character! He's loyal, courageous and strong, but has his imperfections as well, which makes him even more realistic and so easy to fall in love with! I loved the fact that he grew into himself and his relationship with Daryn.

The romance between the two was very slow and intense. It actually made you anticipate it even more and nothing was set in stone. Slow-burn relationships are my favorite and I shipped this one so hard! I feel like these two were perfect at growing separately but not apart, which is something truly admirable. They made a wonderful team and completed each other perfectly. Seeing their romance blossom and become stronger with each chapter, made the experience of reading Seeker even better!

The plot was very original and authentic, which isn't something you come across often nowadays! Probably my favorite thing about Seeker! It took me a while to get into the story but, as soon as I did, I was completely hooked. After I started wrapping my head around the history of the Seekers and everything they stood for, it was so much easier for me to get invested in the story and fall in love with it and its characters. Which is why Seeker got a four-star rating from me instead of a five. Last but not least, the ending was absolutely thrilling and completed the story of the Seekers perfectly!

Veronica Rossi did an amazing job at creating this intriguing world and taking readers along for the ride! It was full of awesomeness that I definitely didn't want to spoil in this review and I really enjoyed it! Magical, beautifully written and perfect for fans of YA novels! 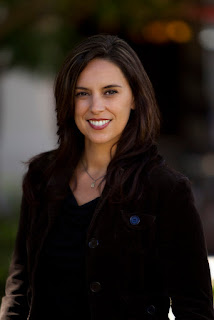 Veronica Rossi is a best selling author of fiction for young adults. Her debut novel, UNDER THE NEVER SKY, was the first in a post-apocalyptic trilogy. Released in January 2012, it was deemed one of the Best Books of Year by School Library Journal. The series appeared in the NY Times and USA Today best seller lists and was published in over 25 foreign markets.Her second series for young adults will begin with RIDERS (published February 16, 2016), the story of four modern day teens who become incarnations of the four horsemen of the apocalypse, and the prophetic girl who brings them together.Veronica completed her undergraduate studies at UCLA and then went on to study fine art at the California College of the Arts in San Francisco. She is a lifelong reader and artist. Born in Rio de Janeiro, Brazil, she has lived in Mexico, Venezuela, and all over the United States, to finally settle in Northern California with her husband and two sons.When not writing, Veronica enjoys reading (it’s worth repeating), painting, and running. She does NOT like anything involving numbers, the addition of them, subtraction of them, you name it. They terrify her. Her obsessions generally lead to fictional works. Currently, she’s exploring New York City during the Revolutionary War.Don’t tread on me. (If you know what that means, then you are my people!)What else? This is getting more fun, isn’t it?She–okay, I–am a huge fan of the SF Giants and the Golden State Warriors. I know, I know. Book types and sporty types shouldn’t be one in the same, but what can I say? I’m breaking the mold. Continuing. I have an irrational love of elephants. They make me cry, but it’s the best kind of cry. On other end of the spectrum, I abhor the shrill squeak styrofoam makes when it’s coming out of a box. Just typing that sentence made me want to scream. Needless to say, Christmas is great, but also really tough on me.It’s probably time to wrap this up. If you’re here, it’s likely because you’ve read one of my books, or because you’re thinking about reading one of my books. Either way, thank you. Writing fulfills me like nothing else and I feel exceedingly fortunate to also call it my profession.