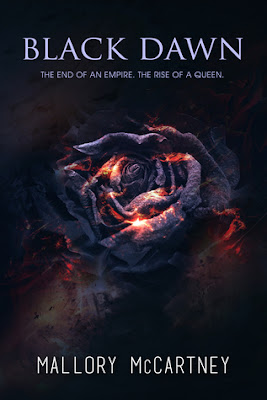 The end of an Empire, The rise of a QueenEmory Fae enjoys leading a quiet, normal life. That is until two mysterious, and handsome soldiers show up at her apartment, and the life she knew is instantly whisked away. Memphis Carter and Brokk Foster come from the magical and war ridden world of Kiero, and upon Emory's arrival she will discover she is the long lost heir to the Royal Line and is thrown into the Black Dawn Rebellion with a dynamic role to ignite the rebels and reclaim her throne. With both men being darkly woven in her past Emory uncovers hidden secrets, a power held long dormant, and will soon realize there are worse things than supernatural humans, love, loss, betrayal, and a Mad King.Some things are better left in the shadows.

First of all, let me start this review by saying that, I went into Black Dawn without having the slightest idea of what was waiting for me inside its pages. I didn't know what to expect and the story itself took me by surprise. It is very interesting and unique, but it took me a while to really get invested in it and start enjoying it. Which is nothing that hasn't happened to me in the past so, that wasn't really a huge problem for me, because it got better and more enjoyable along the way!As I've already mentioned, the beginning was a bit confusing and it took me a while to figure out what was happening. Nonetheless, I really liked Emory and found it very easy to connect with her and sympathize with everything she was going through. Even though she was so overwhelmed by everything, she faced it with a great deal of strength, stubbornness and dedication. She was a very likable heroine and I immensely enjoyed following her journey to discovering her true self. We're also introduced to Memphis and Brokk, who are two very important characters and play a big role in the development of the romance aspect in the book. You can definitely tell that there's going to be a long triangle just by reading the synopsis. I'm not a huge fan of them but, if a book I'm interested in reading proves to involve a love triangle, I won't say no to it. Where the romance is concerned though, the love triangle wasn't my problem. I feel like everything revolved around it and as a result, a lot of other things that were vital to the story, its development and the reader's understanding of it, were left undeveloped and weren't explained as much as they should've been.With that being said, I found the secondary characters very interesting, as well as the way the story progressed. The fighting scenes were very entertaining and well written, but I sincerely wish that, Black Dawn wasn't such a short novel. A couple of more chapters describing things a bit better would've been greatly appreciated.Overall, Black Dawn was a very enjoyable read, with a very good writing style and perfect for fantasy lovers! I just wish that it would have been a bit longer and more developed! 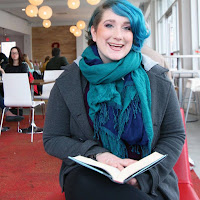 Mallory McCartney currently lives in London, Ontario with her husband and their two dachshunds Link and Lola. Black Dawn is her debut novel, the first in a series. When she isn’t working on her next novel or reading, she can be found dog grooming, book shopping and hiking. Other favorite pastimes involve reorganizing perpetually overflowing bookshelves and seeking out new coffee and dessert shops.

a Rafflecopter giveaway
Posted by Book Lady's Reviews at 14:30