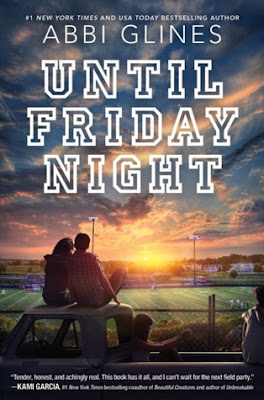 To everyone who knows him, West Ashby has always been that guy: the cocky, popular, way-too-handsome-for-his-own-good football god who led Lawton High to the state championships. But while West may be Big Man on Campus on the outside, on the inside he’s battling the grief that comes with watching his father slowly die of cancer.Two years ago, Maggie Carleton’s life fell apart when her father murdered her mother. And after she told the police what happened, she stopped speaking and hasn’t spoken since. Even the move to Lawton, Alabama, couldn’t draw Maggie back out. So she stayed quiet, keeping her sorrow and her fractured heart hidden away.As West’s pain becomes too much to handle, he knows he needs to talk to someone about his father—so in the dark shadows of a post-game party, he opens up to the one girl who he knows won’t tell anyone else.West expected that talking about his dad would bring some relief, or at least a flood of emotions he couldn’t control. But he never expected the quiet new girl to reply, to reveal a pain even deeper than his own—or for them to form a connection so strong that he couldn’t ever let her go…

Until Friday Night follows the story of Maggie and West, who have both experienced some very traumatic and tough times through their lives. Maggie coped with the hardships life threw her way by isolating herself and becoming a selective mute. Which means that, she chose not to talk because she didn't want to interact with people and give up the safety net that silence undoubtedly provided her with. The events she witnessed scarred her soul and left her feeling like an empty shell of the person she used to be.

West has also been going through some very tough times that he still hasn't shared with anyone. He believes that, by avoiding to tell the people he cares about and that care about him in return the truth, it will make everything real and he won't be able to keep living in this bubble of denial he created around himself. When West meets Maggie, he can't stay away because the hurt and sadness in her eyes matches the emotions he's been trying hard to hide. And when she decides to talk to him after all this time, their story starts to go down a very complicated path that will either make or break them.

Let me start by saying that, I have always loved Abbi Glines and I've immensely enjoyed every single book of hers that I have had the chance to read. Until now. I had a lot of issues with this one. And I was very disappointed because truth be told, I had some expectations. I would have expected to at least enjoy Until Friday Night. The plot was rushed, the characters were way underdeveloped for my liking and most of the time, nothing actually made sense.

It is full of cliches that end up being annoying and aggravating. I have no problem with cliches, I love them when they are portrayed the right way and are made interesting despite the fact that the reader can recognize how cliche they are. Does that make any sense? I sincerely hope it does. Moving on, I can't decide whether I agree with the treatment of any other girl that wasn't Maggie in this book. Or with how West decided to cope with everything that was going on in his life. I can understand the fact that he was hurting and he had no idea how to deal with everything he was going through. That didn't give him the right to treat everyone else like shit because he felt like it. There are so many ways to escape what is going on in your life without hurting others in the process. Positive ways!

Now Maggie is a completely different story. She was such a sweet girl who remained strong through it all and didn't mind helping West through the tough times he was going through. He called, she was there. Always. And I couldn't help but share her concerns about him and his feelings. What would happen when - not if - West didn't need her help any more? I had this particular thought in my mind throughout the book and whatever he said couldn't make it go away. Overall, her character is one of the few that I actually liked reading about. Even though I would have preferred it if the author had shared more information concerning her background. She was the main character after all and I was left with a lot of questions and doubts about what actually happened to her.

I want to point out the fact that I really liked Maggie because unfortunately, I disliked most of the other characters in this book. They were just a bunch of jerk faced jocks who thought they owned the world and could do anything they wanted with it. Girls were treated in an awful way that made me question whether the purpose of this book was to actually relate to its readers, most of which I presume are girls, or to show a side of a judgmental society that treats them without any respect or equality for that matter. They were portrayed in a horrible and unjust way and were treated even worse. I can understand that, not every girl introduced in this book had the best manners, or was likable whatsoever, but I felt like any notion of manners and values flew out the window with the behavior of every character in this book.

Before I stop rambling and writing whatever comes to mind, I just want to mention that, West and Maggie's relationship just felt unhealthy. Especially during the end where he got all possessive and didn't like sharing her now that she decided to start talking again. And then Maggie just goes and forgives West and everything between them is just peachy. No folks. That's not how it works. She's a teenager, it's her first time falling in love and I can understand it. I really do. But you should always clear things up before forgiving people. Second chances aren't for everyone and if a second chance is given with a snap of two fingers, then what?

I was looking forward to reading Until Friday Night so much, but I can't deny the fact that it was problematic. The ending was abrupt, I couldn't understand the logic behind almost everything that happened and nothing was explained as much as I would have liked it to. I know that, this is a very negative review but I'm experiencing mixed feelings while writing it. I really wanted to enjoy this book but truth is, I did not. I gave it a 3 star rating because I really liked Maggie and the story itself wasn't awful.

I know my reviews are super long and I know that, sometimes I point out negatives instead of focusing on the positives but, at the end of the day, that's why I'm here. I love reading and I love sharing my thoughts and opinions about the things that I read even more.