A Thousand Pieces of You - Firebird #1 By Claudia Gray {Review}

Title: A Thousand Pieces of You 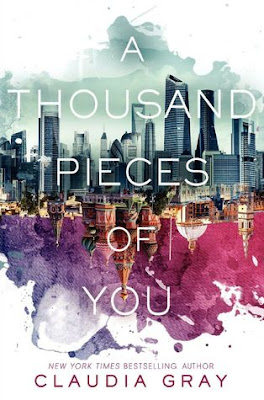 Marguerite Caine's physicist parents are known for their groundbreaking achievements. Their most astonishing invention, called the Firebird, allows users to jump into multiple universes—and promises to revolutionize science forever. But then Marguerite's father is murdered, and the killer—her parent's handsome, enigmatic assistant Paul— escapes into another dimension before the law can touch him.

Marguerite refuses to let the man who destroyed her family go free. So she races after Paul through different universes, always leaping into another version of herself. But she also meets alternate versions of the people she knows—including Paul, whose life entangles with hers in increasingly familiar ways. Before long she begins to question Paul's guilt—as well as her own heart. And soon she discovers the truth behind her father's death is far more sinister than she expected.

A Thousand Pieces of You explores an amazingly intricate multi-universe where fate is unavoidable, the truth elusive, and love the greatest mystery of all.

A Thousand Pieces of You is a book that I've had my eye on for a while. I got into it without any expectations and I'm very glad about it, just because I tend to get disappointed whenever I have high expectations.

Let me just, give you a brief recap of the book. Marguerite's family consists of scientists. Very famous and successful ones at that. They're in the process of designing the Firebird, an intricate device that would make it possible for people to travel to other dimensions. Each dimension that exists, represents a choice differently made. A different version of reality itself where, for example, Germany won World War 2. Or where it didn't even happen. Some dimensions are more technologically advanced than others and you might not exist in all of them.

The point is that, Marguerite's father dies, murdered apparently by, none other than Paul. One of her parents' assistants who is believed to have stolen important data after the murder, and who flew to other dimensions using the one Firebird that they managed to perfect. But, what Paul doesn't know is that, there were two more devices which Marguerite along with Theo use, in order to track him down and make him pay for what he did. But, as we've established in the past, everything is not what it seems! And it will take a while for Marguerite to realize that. But not as long to fall in love with Paul. Every version of him that she meets.

First of all, I found the idea of this book very original. It was obvious from the beginning that, the story line was one I had never read about before so I was very excited to see how it would progress. The synopsis itself fascinated me and totally convinced me to give this a go since, I'm not a huge fan of books categorized as Science Fiction. Second of all, I really enjoyed the writing style and I think Claudia Gray is a very talented writer.

Moving on to the characters. I absolutely loved every single one of them! I easily connected with them and found them very likable. Marguerite was a very interesting main character. She made some rushed choices at the beginning of the book but, who doesn't when faced with decisions that could have such a serious impact on everyone they care about? What I meant to say was, she probably should have thought better about traveling to other dimensions with a device that wasn't even tested to begin with. Her actions were very heroic and impulsive but, I wouldn't have had it any other way. She obviously wants to protect the people she cares about and won't let anyone get in her way of discovering the truth. Which is something that I really admired.

Theo was a very interesting character as well. It was obvious that he cared about Marguerite a lot and he would do anything to protect her. He was also a very mysterious character who left everything behind to find the person responsible for his mentor's death. That shows a great deal of loyalty. I also loved Paul. Every Paul that was introduced in the book. I would have liked it if we had more information about him and his background though, if that makes any sense. I feel like some things about him could have been explained better, I guess. He was amazing in every dimension and sacrificed so much for, not only Marguerite but also her family. Not many people would have done what he did and his actions made me appreciate and like him even more. He is a very misunderstood character, who did what he felt was right in order to protect the ones he cared about. Especially Marguerite who he has feelings for.

I can't really say anything else about the plot because that would spoil the book for you. I just want to mention that, even though the characters were very likable and easy to connect to, the pace of the book itself was very slow. At least for my personal taste. I found it intriguing but at the same time, there were many slow parts that took the magic away from that. And, they managed to overshadow the positives-for me at least- because it took me half a month to finish this book. I took it with me everywhere in the hopes that, I would finally finish it but still. It wasn't enough because I couldn't make myself continue reading, even though I really wanted to find out what would happen next. And believe me when I say that, I've never had this problem before.

I've been debating on whether to continue reading this series or not. Truth is, I'm very curious to see what happens next after the major cliffhanger that happened in the final chapters. I'll probably end up picking up the sequel sometime during the next couple of months, in the hopes that it will be more fast paced and eventful. I have connected with the characters on a certain level so, it doesn't feel right to give up on them just yet. I probably would have given up on the series if I hadn't liked the characters so much and I strongly believe in second chances so, there you have it.

I also want to point out that, I can't vouch for the scientific facts that are talked about throughout the book. I have read reviews concerning whether they are accurate or not but frankly, that does not concern me whatsoever. I understood what was going on and that's what matters.

Overall, A Thousand Pieces of You was an alright book. I think it's worth picking up the sequel and the first book itself, because of the reasons I stated above. The writing was great, the characters were wonderful, the plot was authentic. Those were the positives and I think they're enough to continue on with a series. I just hope the rest of the books aren't so damn slow and hard to get through.

Would I recommend it?

Yes, if you're into Science Fiction. No, if you're looking for a fast paced novel.