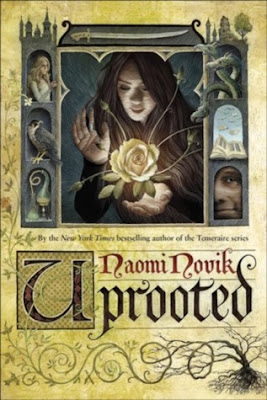 Agnieszka loves her valley home, her quiet village, the forests and the bright shining river. But the corrupted Wood stands on the border, full of malevolent power, and its shadow lies over her life.

Her people rely on the cold, driven wizard known only as the Dragon to keep its powers at bay. But he demands a terrible price for his help: one young woman handed over to serve him for ten years, a fate almost as terrible as falling into the Wood.

The next choosing is fast approaching, and Agnieszka is afraid. She knows - everyone knows - that the Dragon will take Kasia: beautiful, graceful, brave Kasia, all the things Agnieszka isn't, and her dearest friend in the world. And there is no way to save her.

But Agnieszka fears the wrong things. For when the Dragon comes, it is not Kasia he will choose.

I'm gonna start this review by -shamefully- admitting that, I didn't plan on reading Uprooted. I kept seeing it floating around the internet but never actually considered picking it up. Shame on me! Because I loved it more than I've loved a book in a while! And I'm not exaggerating. But, if you gave me Uprooted without a title and an author's name, I would've thought that the Brothers Grimm wrote it. Seriously. It was so beautifully dark and I still can't get over how consumed I was by everything that kept happening. And happening. I mean, things never stopped happening and I loved it. The twists and turns, coupled with their unpredictability just blew my mind!

Let me just say that, I fell in love with the characters. They were perfectly imperfect and do you want to know what I loved even more? The fact that for once, the whole book was not focused on the freaking romance. Yes, you heard me right. There was an obvious romance thing going on but it didn't overshadow the importance of the story and the events that took place throughout it.

I'm going to start with Dragon because, frankly, he's not your typical male lead. He's such an unconventional character and I seriously loved him even more for it! His personality is so different from any of the male characters I personally have come across in most of the books I've read this far. And that's a breath of fresh air! Of course, it was intentional and while some people might find his behavior annoying and unlikely to impress, it was quite the opposite for me. Plus, I'm pretty sure that, if Dragon wasn't portrayed the way he was in Uprooted, I wouldn't have loved it as much.

Same goes for Nieszka. She's one of the bravest, most courageous and strong spirited female heroines. She's such a kick-ass character and I was completely fascinated by her unique personality. She wasn't, even slightly, afraid to put her life on the line and risk her sanity in order to save those she loved. And the whole world of course! She's not afraid of danger, she tells it like it is and stands up for the things she believes in. How she managed to put up with Dragon by the way, is completely beyond me.

She would do anything to save her best friend, which is an admirable quality by itself. And when I say anything, I mean it! She even ventured into the Wood with little hopes of actually succeeding and most importantly, surviving. She was corrupted, she took everything like a champ and the ending left me in awe of her spirit and strength. She was a force to be reckoned with. An admirable character who would stop at nothing to make the impossible happen, defeat the Wood and save everyone in the process!

Moving on to the writing style, which was fantastic! It had a magical quality to it that is rare and cannot be found on a regular basis. It sucked me right in, from the beginning until the end, and I seriously could not get enough of it. The story itself was dark, fascinating and nothing like anything I've read before. That probably doesn't make sense but, we'll just pretend otherwise. Naomi Novik is such a talented writer and every single detail is described perfectly. The pages I was reading were playing in my head like scenes from a movie and I couldn't get over how vivid everything was!

Overall, Uprooted was one of those rare on-the-edge-of-your-seat books that doesn't come across that often. It had me desperately crying for more. I could not get enough of the story, the writing, the characters. The ending didn't really give me the closure I needed to feel better about myself and not fall into depression mode because this -believe it or not- is a stand alone. That is the most disappointing thing about it. There's no sequel for us, folks. And it seriously breaks my heart. It's going to be a while before I let this go!