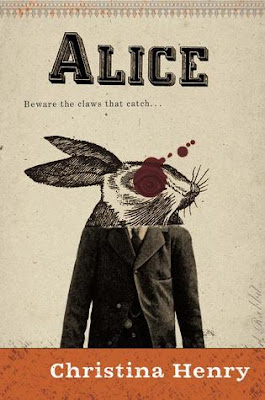 A mind-bending new novel inspired by the twisted and wondrous works of Lewis Carroll...

In a warren of crumbling buildings and desperate people called the Old City, there stands a hospital with cinderblock walls which echo the screams of the poor souls inside.

In the hospital, there is a woman. Her hair, once blond, hangs in tangles down her back. She doesn’t remember why she’s in such a terrible place. Just a tea party long ago, and long ears, and blood…
Then, one night, a fire at the hospital gives the woman a chance to escape, tumbling out of the hole that imprisoned her, leaving her free to uncover the truth about what happened to her all those years ago.

Only something else has escaped with her. Something dark. Something powerful.

And to find the truth, she will have to track this beast to the very heart of the Old City, where the rabbit waits for his Alice.

Let me start by saying that I would definitely recommend reading Alice's Adventures in Wonderland before going into this book. It's not exactly a retelling of the original story but it's definitely inspired by the characters and everything. I managed to hold back and made myself read the original story before picking up this one. Something that I haven't done before truth be told, with any other retelling or whatever, so this is definitely a first....There's a first time for everything though right? It's not necessary to read the original Alice, it just made it easier for me to keep up with the world and the characters Christina Henry introduced in this version.

In this unique tale of Alice, the world is divided into the New City and the Old City. What that means is that everything that didn't fit into the luxury and prestige of the New City, everything that money couldn't fix was thrown into the desperation, misery, darkness and terror the Old City represented! Doesn't get any more simple than that. And kind of twisted... and a lot of other negative things. Anyway, the story begins with Alice who is locked in an asylum. Her only company? Hatch. A serial killer who was found holding an axe while surrounded by the bodies of a couple of poor folks. They haven't actually seen each other but they have been everything each other has had for the past ten years. And then...during a fire, they managed to escape...But as always,there was a catch. Darkness personified escaped with them. And thus the tale of madness in a quest to find answers and save the world begins. Basically, the Old City is divided into territories and each of the bigger territories has a leader. So Alice and Hatch have to go through Chesire, the Caterpillar,the Carpenter and the Walrus to eventually reach the Rabbit. And all those gentlemen are no saints. Devils is more like it. What happened to the poor creatures that crossed paths with them is so heartbreaking and...disgusting. Seriously how could someone do that? Crazy I tell you. But that's what made this story different and unique!

Alice was a really quick read and I sincerely enjoyed immersing myself in the story...I just think it could have been a bit longer maybe and explained a few things better. It's categorized as horror but it's more blood and gore and death than anything else. Alice was in no way predictable and the suspense was so real I could touch it. I admire the author's unique ability to create characters that are nothing like the Lewis Carroll's and I feel like if the book was titled something else, few people would actually connect the story to Alice's adventures in Wonderland. The author was inspired by the original story and its characters but that didn't stop her from giving a new meaning to the word MADNESS.Because it's the truth...We're all mad here!!!

She managed to bring the characters to life and completely distort their images and form these crazy,sadistic madmen that find joy in tormenting humans. The world she created in this book was nothing if not extraordinary. It all felt so real but at the same time straight out of your worst nightmares. There wasn't anything wrong with the writing but even though I loved how the story developed I felt like the two main characters- that would be Alice and Hatch- did not develop as much as I expected. I guess they did develop as characters since they were locked in that asylum for ten years, but the author could reveal a bit more about their pasts. We got to learn a few things about Hatch's past which are really important because they're kind of the whole point of the next book...Yes there will be a SEQUEL!!! But Alice? I was desperately waiting to learn more about her but nothing major was revealed. I was mainly was expecting to see her family come into it but that didn't happen. Naturally, the author let us in on the reason Alice found herself in the Asylum and in the hands of the Rabbit prior to that. Which was really clever by the way and well...unpredictable. Sooo many twists I tell you! Alice's relationship with Hatch was so beautifully twisted it's insane! And I totally ship them as a couple! Alice has mastered the art of keeping Hatch in line and balancing out his dark side. And he would do anything to protect her from harm's way. He would kill her just so she wouldn't suffer in the hands of the evil people mentioned above. That's true love folks.

Moving on to the secondary characters. Chesire was the biggest surprise out of them all. And surprisingly he didn't repel me. On the contrary actually. I was so excited when he turned out to be kind of not the villain here, since he kind of helped the main characters reach the Rabbit. He did it for his own good of course but still. Gotta give the guy credit for that. Now, don't get me started on those other monsters. They were truly some of the most horrible characters I've ever come across. And that's saying a lot! Christina Henry's ideas are also out of this world, since I can't even fathom how she managed to create such a twisted but at the same time addictive story. Magic I tell you!

I won't go into detail concerning the horrible things those guys did because that would obviously be spoiling the whole book. Highly recommend that everyone reads Alice. It's strangely enjoyable, especially for someone who isn't actually fond of horror books like myself...or any books that involve that much blood and death. This was a book I immensely enjoyed and I seriously cannot wait for the sequel! I wish I could guess what Christina Henry is up to concerning the sequel but fortunately I can not. Can't wait to be surprised though! 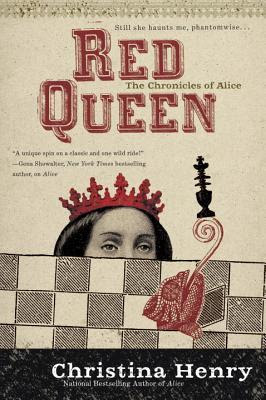