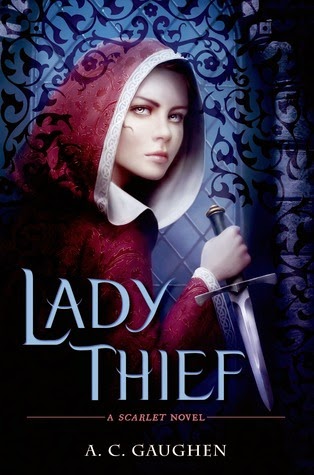 Scarlet’s true identity has been revealed, but her future is uncertain. Her forced marriage to Lord Gisbourne threatens Robin and Scarlet’s love, and as the royal court descends upon Nottingham for the appointment of a new Sheriff, the people of Nottingham hope that Prince John will appoint their beloved Robin Hood. But Prince John has different plans for Nottingham that revolve around a fateful secret from Scarlet’s past even she isn’t yet aware of. Forced to participate at court alongside her ruthless husband, Scarlet must bide her time and act the part of a noblewoman—a worthy sacrifice if it means helping Robin’s cause and a chance at a future with the man she loves. With a fresh line of intrigue and as much passion as ever, the next chapter in Scarlet’s tale will have readers talking once again.

I'll start by saying that,I was a bit disappointed when I finished reading Lady Thief.As soon as I started reading it I was so anxious and overwhelmed with emotions I can't even put into words and then...I know I might sound a bit dramatic but keep in mind that Scarlet was my life back when I read it it 2012.I don't know what it was that made me love the first book in the trilogy so much but fortunately I did.And it's not really easy for me to get that passionate about a book and still remember every single moment of it and every single feeling it brought.

Moving on to Lady Thief.I will not lie and sugarcoat things because truth be told...some tragic things that almost made me cry happened during the end of the book which of course I will not mention even though I am literally dying to...not because I wanna spoil you guys but because I really want to share my grief with someone.Let's ignore my exaggeration...I'm just feeling a bit emotional at the moment.

Of course the scenes between Rob and Scarlet,scarce as they were breathtaking...pure magic.I don't know why,maybe it's because of the fantastic writing or because of the fact that I have a weakness for the characters of the trilogy in general...the moments they shares were just...perfection.Even though not a lot of things happened throughout the book I think the precious and special moments between those two made up for the lack of adventure and kick ass fighting scenes.

Moving on to the writing...it is fantastic.So expressive and different.It's simple but at the same time unique and realistic.I felt like I was there,alternating between reality and the world Lady Thief brought to life.In my opinion,when a book manages to do that for me,make me feel like I live in a different reality...it's a huge achievement.I don't know if this only works for me though so...what do you guys think?Has this happened to you before?And if yes what book were you reading at the time?

The character development was nothing major...there were a lot of twists in the emotions department.At the beginning a lot of things changed between Rob and Scar and then...their relationship developed and they actually had the chance to live happily ever after together and save the people from the hands of a new sheriff at the same time...And then everything just...vanished into thin air and disappeared.Just like that.It took so much time and so many sacrifices to finally reach happiness but in the end...in just one moment everything the characters managed to achieve crumbled and fell.It was like you could see and feel that emptiness the unfortunate ending left behind...It was heartbreaking.

And now...I obviously can't wait for the release of Lion Heart.I'm pretty sure I will not rest until I get my hands on the last book of the trilogy.I highly highly recommend this trilogy because...seriously?There's nothing wrong with it and I think a lot of people will find what they were looking for by reading these books.Especially Scarlet because that was by far my favorite.Lady Thief might not have been what I was expecting but the ending still broke my heart.One of the year's resolutions should be...being patient until the release of Lion Heart.Because to tell you the truth...I'm not that patient when it comes to books I want to read immediately but won't be released until months later.I don't even know if I'm making any sense right now so I'll just stop.