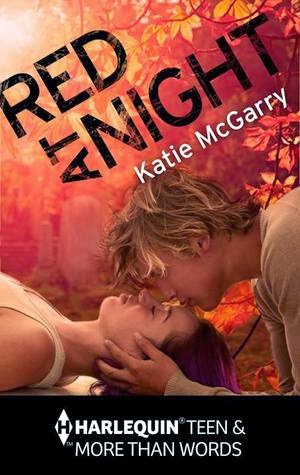 In Red at Night, Stella and Jonah are total opposites. She's the girl with purple hair from the wrong part of town. He's a high school senior who hangs with the cool crowd. Until a car accident leaves him haunted by guilt, and Jonah starts spending time at Stella's favorite refuge…the local cemetery.

Stella knows she should keep her distance—after all, she spent her girlhood being bullied by Jonah's friends. Once he's sorted out his tangled emotions, Jonah won't have time for her anymore. Too bad she's already fallen for him.

Red At Night follows the story of Jonah and Stella who are complete opposites.Stella comes from the wrong side of town and Jonah is rich and popular.But a tragic car accident changes Jonah's life and he meets Stella one day at the cemetery.

Stella has no real home and the cemetery is kind of like a safe haven for her.It's always there and she can go whenever she wants.Nobody bothers her until Jonah shows up.They form a unique and kind of weird relationship which gives meaning to both their lives and changes them completely,proving that people can change for the better.But what will happen when things get rough?Will they hold on to each other or will they let go?

First thing I want to mention is that Red At Night takes place at the same school,environment or whatever you want to call it as the Pushing the Limits series.I realized it when Mrs Collins made an appearance.Second thing I have to say is that I didn't like this book.I found it rushed and just...flat.I couldn't exactly connect with the characters since I didn't have time to get to know them before the book ended and I felt like this book could have been a full novel instead of a novella if the author handled some things differently.

Moreover I think that Red At Night wasn't novella material if that makes any sense.Katie McGarry has some spectacular ideas which I think she's proved already,and this book could have been so much more.Not enough attention was given to the characters' backgrounds which I think was what bothered me the most.If you don't know anything about a character's past,how can you understand what's going on and how can you connect with him?It was obvious that Stella went through some pretty difficult times but what happened?And Jonah?He kind of explains the night of the car accident but that's it.

There was some character development but the story for me felt flat.That's the best way I can explain it.And what really frustrates me is the fact that this could have been an amazing full novel.So many things could have happened and so many twists could have been thrown into the story...Just thinking about it makes me mad.I'm just glad that I didn't go into this having any expectations because I'm pretty sure that I wouldn't have been able to stop the tears from falling...even if I tried.Because I don't like it when books I've had high expectations for let me down.Worst thing ever!I'm pretty sure everybody knows how that feels like.

Even though I didn't enjoy Red At Night,I can't ignore the fact that the writing was spectacular.I don't know if non existent plot goes together with perfect writing but whatever.The plot wasn't non existent exactly,but it could have been so much more developed,interesting or with other words,mind blowing.

I liked the fact that both of the characters changed for the better and found themselves throughout the book but that's it.And again,I'm so heartbroken because this book will never be what it deserves.And I know that Katie McGarry can do better so I'm hoping that her next big and fascinating idea will become a full novel,not just a rushed and dissatisfying novella...

Last but not least,we have the secondary characters which I can't even remember.That means that they were entirely introduced which isn't that big of a deal if you think about it,but in my opinion,some of them played kind of a big role in the story so a better introduction would have been appreciated.

Red At Night wasn't my cup of tea but maybe some people have found it or will find it more enjoyable and satisfying than I did.That doesn't mean that my opinion for Katie McGarry or her work has changed.She's one of my favorite authors and I was just slightly disappointed.I know that she has some amazing ideas and I can't wait to read more of her books!