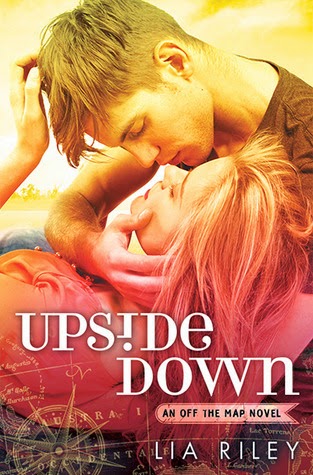 If You Never Get Lost, You’ll Never Be Found

Twenty-one-year-old Natalia Stolfi is saying goodbye to painful memories—and turning her life upside down with a trip to the land down under. For the next six months, she’ll pretend to be a carefree exchange student. Everything is going to plan until she meets a surly surfer with hypnotic green eyes, and the troubling ability to see straight through her act.

Bran Lockhart is having the worst year on record. After the girl of his dreams turned into a nightmare, he slunk back to Melbourne to piece his life together. Yet no amount of disappointment could blind him to the pretty California girl who gets past all his defenses. He’s never wanted anyone the way he wants Talia. A single semester abroad won’t  cover something this serious. But when Bran gets a stark reminder of why he stopped believing in love, he and Talia must decide if what they have is once-in-a-lifetime . . . or if there’s a plane to California with her name on it.

“You’re doing fine, Talia,” Bran says. “Now, I’m going to need you to release your left hand, reach a few inches and grab the next hold.”
I grit my teeth. The way he talks, you’d think I’m scaling Everest or at least Mount Kilamanjaro. Instead—
“Excuse us, we’ll be by in a tic. That’s the way, Andy, right around the lady.”
I’m the lady. Andy, a kid who doesn’t look a day over seven, scrambles past in a
flurry of Spiderman shoes and gap-toothed smiles. His parents bring up the rear, beaming at their agile little monkey with obvious pride.
And they aren’t the first group to go by.
Five Swedish women, another young couple and a guy in his mid-seventies shot past me during the last quarter hour.
The top is so close I can taste it. Bran is everything encouraging, but below is a twenty-foot drop. Not enough to kill, unless I fall with some sort of suicidal intent, still,
what if--
“Take my hand.” Bran eases toward me.
“Nope.”
“Talia.”
“I’m serious. No.”
This is it. I can’t do it. I can’t let go.
He won’t admit the truth while I verge on full-scale panic attack mode, but there’s no doubt I’m giving him cause to lose interest. I’m spelling out the reasons I suck in bold, capital letters.
“Take a deep breath,” he orders.
“Breath taken.”
“Another one.”
“Okay.”
“I want your hand in mine, no bullshit. You’ll be safe. I’m going to keep you safe. Trust me.”
Somehow I do it. I lace my fingers with his and he helps me gain a few more feet.
My head clears the boulder and there’s the steel marker identifying the summit. Holy shit, I’m going to get there.
A last step and we’re at the top. The kid in the Spiderman shoes munches a vegemite sandwich. I want to scoop him into a big fat squeeze except his parents would likely object. Instead, I tackle hug Bran.
“I knew you’d do it.” He buries his face in my hair.
“I didn’t.”
He turns me around to see the view and hugs my waist. “Your place is here, Captain, in the sun,” he whispers. “Don’t ever forget it.”

Lia Riley writes offbeat New Adult Romance. After studying at the University of Montana-Missoula, she scoured the world armed only with a backpack, overconfidence and a terrible sense of direction. She counts shooting vodka with a Ukranian mechanic in Antarctica, sipping yerba mate with gauchos in Chile and swilling fourex with stationhands in Outback Australia among her accomplishments.

She and her family live mostly in Northern California.

Giveaway
a Rafflecopter giveaway
Posted by Book Lady's Reviews at 14:46