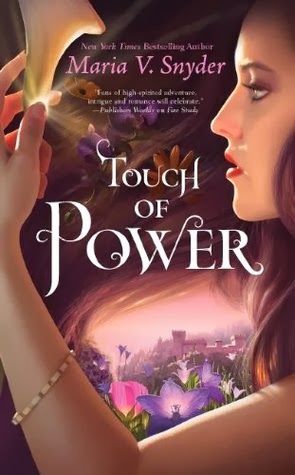 Laying hands upon the injured and dying, Avry of Kazan assumes their wounds and diseases into herself. But rather than being honored for her skills, she is hunted. Healers like Avry are accused of spreading the plague that has decimated the Territories, leaving the survivors in a state of chaos.

Stressed and tired from hiding, Avry is abducted by a band of rogues who, shockingly, value her gift above the golden bounty offered for her capture. Their leader, an enigmatic captor-protector with powers of his own, is unequivocal in his demands: Avry must heal a plague-stricken prince—leader of a campaign against her people. As they traverse the daunting Nine Mountains, beset by mercenaries and magical dangers, Avry must decide who is worth healing and what is worth dying for. Because the price of peace may well be her life....


I've been meaning to read this book since I found out about it and because of the fact that Maria V.Snyder has become one of my favorite authors.But for some reason,I kept putting it off.And finally,I decided to just pick it up and read it.And I keep asking myself why I didn't pick it up sooner.

Touch of Power is about a world where Healers exist but are being blamed for a plague that killed billions of people.As a result,all of them are executed except from Avry who manages to survive but gets caught when she saves the life of a little girl.But then,a group of rogues as they are described,save her from her execution.And they value her healing gift more than anyone.And that is because they want her to save someone who could change the world and make it a better place.

I'll start with the only thing I didn't like in this book.And that was Kerrick and his behavior.He was such a moody jerk.I disliked him as soon as he was introduced.That never happened before.And believe me that I tried to like him but I just couldn't.He was so controlling,frustrating and made me wanna punch him in the face.I mean....come on.He slapped her.My dislike for him turned close to hate after that.I have to admit that he was a good leader but that's it.

Moving on to the rest of the characters.Avry is one of the bravest female characters I've ever encountered.She's kick ass,smart and willing to sacrifice herself.She's also caring,stubborn and doesn't take bullshit from anyone...especially Kerrick.She's a very strong female character and I loved her from the very first chapter.She sacrificed herself and healed a little girl,even if she knew what would happen.Another thing I loved were the secondary characters.They were all perfect together and I loved the time they spent together and how they slowly became a really dysfunctional but loving family.

I loved the writing and the word building.This book was so well written and the plot was so clever and interesting.The effort the author put and the world she created are of course fascinating and admirable.I loved all those names of places,items and the way the author described everything was so vivid and realistic.It was so easy for me to imagine everything inside my head.And then we have the character development.After every single chapter,the characters and the plot developed so beautifully!There was so much action and through this book,not only Avry and the other characters,but the reader as well completes the journey and lives an unforgettable and exciting adventure.In addition to that,we have the unpredictable ending that left me speechless and the twists that had me hanging at the edge of my seat.

Touch of Power was such an enjoyable read,full of action,sacrifices and the true meaning of loyalty and friendship.I was introduced to a magical and unique world that I eventually fell in love with.And of course I highly recommend it to people looking for a beautifully written book like this one...