Book Blitz - My Date From Hell By Tellulah Darling + Excerpt 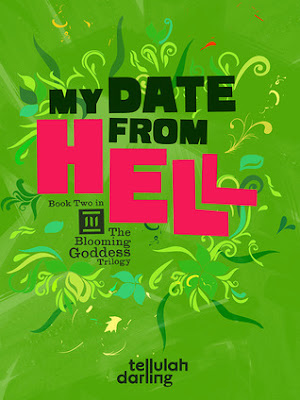 Sophie Bloom’s junior year has been a bit of a train wreck. After the world’s greatest kiss re-awakened Sophie’s true identity as Persephone (Goddess of Spring and Savior of Humanity), she fought her dragon-lady guidance counselor to the death, navigated mean girl Bethany’s bitchy troublemaking, and dealt with the betrayal of her backstabbing ex, Kai (sexy Prince of Darkness). You’d think a girl could catch a break.

With Zeus stepping things up, it’s vital that Sophie retrieve Persephone’s memories and discover the location of the ritual to stop Zeus and Hades. So when Aphrodite strikes a deal that can unlock Sophie’s pre-mortal past, what choice does the teen goddess have but to accept?

The mission: stop media mogul Hermes from turning Bethany into a global mega-celebrity. The catch? Aphrodite partners Sophie and Kai to work together … and treat this suicide mission as a date. Which could work out for Sophie’s plan to force Kai to admit his feelings for her–if she doesn’t kill him first.

Add to that the fact that BFF Theo’s love life and other BFF Hannah’s actual life are in Sophie’s hands, and suddenly being a teenager—even a godlike one—seems a bit like … well, hell. Whatever happened to dinner and a movie?

The YA romantic comedy/Greek mythology fireworks continue to fly in My Date From Hell. Love meets comedy with a whole lot of sass in book two of this teen fantasy romance series. Breaking up is easy; dating is deadly.

The tigers herded me along for about fifteen minutes over soft, spongy ground with the occasional tree root to stumble over. Nothing slithered or skittered over my feet, for which I was profoundly grateful.
We stepped into a clearing in front of a large, clear pond with a waterfall. It was beautiful here. I almost forgot about my keepers until one of them pawed at me gently. I jumped at the slight rasp of its claws on my skirt and glared at it.
“You prefer lunch with a view?” I asked the tigers, pleased with my bravado. They sat down, hemming me in along the shore of the pond. A woman began to sing. Not in Greek. Not a hymn or a chant or a lullaby.
Nope. She sang of how her loneliness was killing her. Which sounds poetic, but was actually Britney Spears.
Another woman joined her. And another.
It was the best unplugged cover of “Hit Me Baby One More Time” that I’d ever heard.
Three young women swam out from behind the waterfall. They looked like triplets, with dusky olive skin, and long black hair all threaded through with silvery flowers that glinted as they caught the sunlight. Their voices soared as they entreated the object of their song to give them a sign.
My toes were tapping. And yeah, I hummed along. Whatever. It didn’t get to be a massive hit without being catchy.
The Diana Ross of the group swam forward and held out her hand. As if. I wasn’t jumping in. One of my feline jailers nudged me hard enough to push me in. Instead of being wet, I found myself floating underwater but in the air. The
women continued to sing, starting their song again as they somehow plucked orchids which did usually not grow underwater to weave in my hair.
By the time they had finished adorning me, I was singing, too.
I rose out of the waves. Light caught the spray of droplets, creating a thousand tiny prisms of color. Crooning my heart out with eternal angst, I was consumed with emotion. I had to sing.
This was the most poignant song ever written and I was the keeper of all the anguish.
Kai stepped out into the clearing and I sang to him. Sang this ageless story
that was our tale. About misunderstanding. About confession. And this burning need to know.
I walked out of the water and took Kai’s hands. Enfolded him in my arms then returned us to the pond. I sank with him beneath the waves into this place of air, my voice raised in lyrical pleading to show me that sign.
That’s when Kai tickled me.
As I started to laugh and could no longer sing, I realized that I was drowning him—not in air but in cold water—while burbling Britney Spears lyrics off- key, tears falling from my eyes like an overwrought teenybopper.
Jack hadn’t attacked me, psychologically or otherwise. No, he’d put me under the spell of the sirens and then made me their lead singer in an attempt to take Kai out. Thankfully, it hadn’t worked. I stumbled out of the pond and said casually, “Well, that was awkward.” 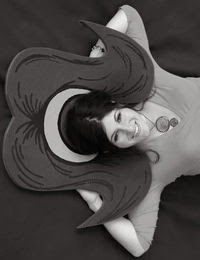