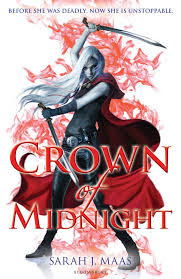 An assassin’s loyalties are always in doubt.
But her heart never wavers.After a year of hard labor in the Salt Mines of Endovier, eighteen-year-old assassin Celaena Sardothien has won the king's contest to become the new royal assassin. Yet Celaena is far from loyal to the crown – a secret she hides from even her most intimate confidantes.Keeping up the deadly charade—while pretending to do the king's bidding—will test her in frightening new ways, especially when she's given a task that could jeopardize everything she's come to care for. And there are far more dangerous forces gathering on the horizon -- forces that threaten to destroy her entire world, and will surely force Celaena to make a choice. Where do the assassin’s loyalties lie, and who is she most willing to fight for?


Crown of Midnight is probably the best book I've read in 2013.Words cannot express how much I loved this book.At first,I didn't want to expect much because I would be disappointed if the book didn't reach my expectations but I couldn't help it.And of course I was wrong to think that I wouldn't love this one as much as the first one.Maybe more.

While reading the book,I was literally jumping up and down.It took me a while to finish it though because of school keeping me busy.I didn't have time to read during the day at all but I finally found time to finish it and I shouldn't have.We don't even know the publication date of the third book and it kills me to know that I'm not gonna be reading it any time soon.

I have to say a big Well Done to the author for her amazing writing,mysterious and intriguing characters and of course,for the fascinating plot.The writing was just perfect.It was so unique and kept me on edge all the time.I loved the story development and I just....I fell in love with the writing.End of story.

Moving on to the main characters.Celaena was the kick ass assassin from Throne of Glass.Nothing changed and she became more determined to win her freedom and end her suffering.But Queen Elena had other things in mind.She wants Celaena to find the King's source of power.And our assassin proves that she is strong,loyal,brave and has more courage than any other female character I've ever read about.She does things that put her life in danger to save the people she loves.By the end of the book,I loved her even more than I did before.

Let's move on to Chaol.He's a really mysterious character and his relationship with Celaena is so unique and different.I think he made some mistakes but he deserves a second chance.I loved Dorian as well and found it hard to choose between those two.They were really supportive and I think Celaena will need both of them,when the time comes.Nehemia was pretty amazing as well but I was so sad and upset when...something bad happen.Don't want to spoil anyone.She was such a lovely and caring soul and things shouldn't have ended that way for her.Celaena's reaction and what happened in general was so heartbreaking.

There were so many twists in this book and that was just insane.So many things happened and I enjoyed the book so much.I don't think I've read a book that made me feel so many things before.I'd been looking for a book that would make me feel this way for a long time and apparently,I found it.Reading Crown of Midnight was just so refreshing.

The author took me,as a reader,to an amazing journey,full of adventure and twists and heartbreak.Probably the best of the year.And now I just want more.If you haven't started the series yet...what are you waiting for?