Faking It By Cora Carmack {REVIEW} 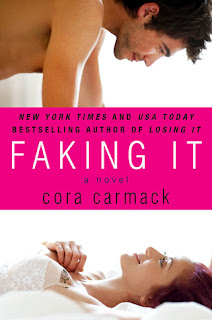 Mackenzie “Max” Miller has a problem. Her parents have arrived in town for a surprise visit, and if they see her dyed hair, tattoos, and piercings, they just might disown her. Even worse, they’re expecting to meet a nice, wholesome boyfriend, not a guy named Mace who has a neck tattoo and plays in a band. All her lies are about to come crashing down around her, but then she meets Cade.Cade moved to Philadelphia to act and to leave his problems behind in Texas. So far though, he’s kept the problems and had very little opportunity to take the stage. When Max approaches him in a coffee shop with a crazy request to pretend to be her boyfriend, he agrees to play the part. But when Cade plays the role a little too well, they’re forced to keep the ruse going. And the more they fake the relationship, the more real it begins to feel.


I discovered Losing It on Goodreads a couple of weeks ago and seriously?The description just didn't make me want to read that one.But then I check out the companion/sequel and I fell in love.
Maybe sometime,I'll pick up Losing It but...not right now.

Max pretends to be someone she's not just to satisfy her parents.She dyes her hair and has tattoos but her parents would never accept the real her.And of course they won't accept her bad boy boyfriend.So when her parents tell her that they're coming to visit,she has to do something.So she meets Cade at a coffee shop and asks him to be her fake boyfriend.And of course he accepts.And what the description says is true...Because the more they fake their relationship,the more real it begins to feel...

I fell in love with Max from the minute I started reading the book.I loved her personality and how she handled things.Even though I didn't like the fact that she was pretending just to satisfy her parents,I think she was an amazing character and of course,she didn't deserve Mace.The guy's an asshole.Moving on to Cade.He's the perfect guy for Max and I think he got the happily ever after her deserved.Because in Losing It,he lost the girl and it's obvious from when they meet at the beginning of the book.But that's a story for another time.I loved the ending and the fact that Max finally had a talk with her parents and then finally...after the exchange of a lot of hurtful words,they accepted their daughter for who she was and they stopped trying to make her be someone she isn't.

Faking It hooked me from the moment I started reading and the author's writing was just...fantastic.I don't think there was anything wrong with the book and I really enjoyed reading it.There were moments when I couldn't read fast enough and I had to know what would happen.And that's why I couldn't put it down.And I completely understood how the characters where feeling and I just felt what they felt.

Can't wait to read the next book which I think is about another character that wasn't here but was in Losing It.Not gonna explain it cause it is really complicated