Dance For Me By Helena Newbury {REVIEW} 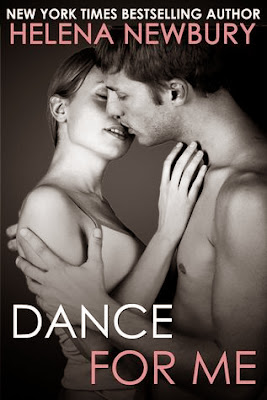 Natasha is one of the most promising ballet dancers at the prestigious Fenbrook Academy of Performing Arts and she’s just landed a life-changing audition. But no one knows the guilt she carries...or the damage it makes her inflict on herself when she’s alone.Darrell is a multi-millionaire designer at 25. But past traumas have pushed him into isolation and the intense pressure of his work has brought him to the edge of burnout. Seeking inspiration, he sees Natasha dance and hires her as his muse.As she dances for him, the two become entwined in a passionate but troubled relationship. He starts to see the pain inside her and helps her gradually lower her defenses...but Darrell has demons of his own. Can two broken people save each other? Or will the darkness they’re hiding consume them both?This New Adult Romance is recommended for 17+ due to mature themes, sexual situations and language.

Dancing is the only thing that keeps Natasha grounded.Without dancing,she wouldn't exist.It keeps the memories at bay and when things get out of control and she feels like falling,she does something to control it.And of course nobody knows the secret she's been hiding.And then Natasha meets Darrel and for the first time,she feels alive.At first,she dances for him because he needs inspiration but then,it becomes more than that.When Darrel sees Natasha dancing for the first time,he is fascinated and wants her to dance for him and help him find the inspiration he needs for finishing a really important project.And he soon realizes that he wants her to be something more.He wants her to be a part of his life and he can't let her go.When the time comes for them to reveal the truth to each other...will they do it?Will they be honest with each other?In the end...will their relationship just fall apart?Dance For Me isn't your typical New Adult book.Both of the main characters have troubled pasts they cope in different ways.There's also the whole thing with the actors,the dancers and the musicians...That was awesome.The world the author built in the book was fascinating and something really different.The story was so beautifully written and I found it hard to put the book down.The character development was great and again...I loved that the story was told from both their perspectives.Reading the book made me feel so many things it was ridiculous.You could tell that the author did a lot of research to write the book and again,I loved her writing.The secondary characters were also amazing and in my opinion made the story better and more exciting.Natasha and Darrel's friends were amazing and really supportive.I also liked the fact that the author didn't reveal what happened to the characters from the beginning(even though it was really frustrating).They always said something that had to do with their pasts but never the whole story.So frustrating...When I started Dance For Me I didn't have high expectations,mainly because it was the first time I heard about it and I started reading it without knowing what to expect.But it turned out to be such a beautiful and emotional story.I enjoyed it so much and I can't wait to read the sequel!ARC provided by the author for an honest review!