The Redemption of Callie and Kayden By Jessica Sorensen {REVIEW} 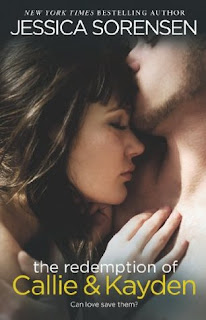 The dark secret Kayden has kept hidden for years is out. Worse, he's facing charges for battery. The only way he stands a chance against the charges is if Callie speaks up, something he'll never ask her to do.

Callie knows Kayden is going back to his dark place and desperately wants to save him. But saving him means admitting her secrets aloud. Callie and Kayden are stronger than they think, especially when they're together. Together they move forward, face their demons, and finally start to heal from their traumatic pasts.

After what happened to Kayden in The Coincidence his relationship with Callie is hanging on the balance for a bit.He doesn't want to burden her with his problems and he thinks that she can find someone better.But what he doesn't realize is that they were literally made for each other.Callie is devastated after what happened to Kayden and she wants to help him.But of course,he keeps pushing her away until they can't resist anymore and finally get together.Kayden finally realizes that he doesn't have to do it alone.They both have to face their pasts and start planning their future because life's too short and they've spent the majority of it feeling broken.They saved each other and it's time to move on.But the person who ruined Callie's life and the person who ruined Kayden's life,are still free.Kayden decides to pour his heart and soul out and finally say what's been going on in his life and what really happened to him.And Callie decides to say everything that happened to her.And in the end...they finally pick up the pieces for each other and they're whole again!!

I'm just surprised by how much I love Jessica Sorensen's writing.She's become one of my favorite authors.Her characters are amazing and I was so glad that we got to see more of Seth and Luke.I love them and I can't wait for Luke's story.I was so happy with how the book ended and that finally Callie and Kayden were happy together.I kinda hated Kayden's mother and could totally understand why he didn't like her.She just let his father do whatever he wanted without doing anything to stop him.I loved Callie and how strong she was when she told her parents what happened.She's an amazing character and I loved her relationship with the guys and the fact that she was trying really hard to get over what happened...even if sometimes it wasn't that easy.I also loved Kayden and Callie's moments together.And the end kinda has me wondering what happened to Luke's sister.I think we'll find out in the next one.I loved the plot and I'm probably gonna be obsessed with this one for a while.It was a beautiful and emotional story that really touched me.I think that fans of Callie and Kayden won't be disappointed.I certainly wasn't.I literally stayed up all night to finish it and I'm just so happy and sad at the same time,because even though I've read it there won't be any more Callie and Kayden and that's so sad.I'll miss them but,I think I'll see them again on The Destiny of Violet and Luke.

The Redemption of Callie and Kayden talks about love, freedom, moving on and learning to give and receive love.There were some amazing quotes but I'm not gonna include any and spoil anything so you'll just have to read it to find out what happens.It was a beautiful,amazing and really touching story that I'll always remember.And I'm glad that Callie and Kayden finally got their happily ever after!