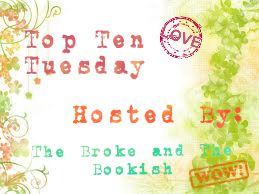 So,it's time for another TTT hosted by The Broke and the Bookish.Today we're talking about our ''Top Ten Beginnings and Endings.''I have to say that this one was a bit difficult since most of the books I wanted to add are in Greek and I'm just not really good at translating so I tried to find beginnings and endings from the english books I own and actually have read.So here we go!

Easy By Tammara Webber
''I had never noticed Lucas before that night.It was as though he didn't exist,and then suddenly,he was everywhere.''
If that first sentence doesn't get you dying to learn what she's talking about,well...what does????

Breathe By Abbi Glines
''Life has always been a struggle for me.From what I could tell, it wasn't daisies for everyone else either.I never let go o the fantasy that one day I wouldn't feel so alone and isolated from the rest of the normal world.My dream is what kept me going many nights when I fought the desire to just disappear.''
I don't know why but the beginning of Breathe intrigues me.It makes you wanna learn what's going on in the main character's life to make her think like that.I was gonna add the whole paragraph but that would be too much.

Poison Study By Maria V. Snyder
''Locked in darkness that surrounded me like a coffin,I had nothing to distract me from my memories.''
No need to say anything else...

The Immortal Rules By Julie Kagawa
''Reaching back,I drew my blade,feeling it rasp free,gleaming as it came into the light.Looking up at the approaching rabids,I smiled.''
If that's not a kick-ass ending,I don't know what it is...
Sweet Evil By Wendy Higgins
''If life was a game,like everyone said,then I wanted to win.I held up my hands to the heavens.Deal me in.''
I don't know why but I just love Sweet Evil's ending.

The Truth About Forever By Sarah Dessen
''But there was only one truth about forever that really mattered, and that was this:it was happening.''
Not exactly the last sentence but well...I love that line so much.

The Coincidence of Callie and Kayden By Jessica Sorensen
''I thought I'd saved Kayden that night at the pool house,but I was wrong.I just bought him time until the next windstorm swept through.''
No need to explain this ending that literally tore me apart...


So...that was it.As you can see I couldn't find exactly five beginnings and I didn't want to add more endings so I just left it there.Feel free to comment below and of course leave your TTT links!