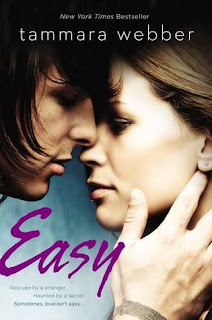 After going to a party with her best friend,Jackie leaves early and on her way to her truck,she is attacked by someone she thought to be a friend.Last minute,when she thinks that there is no hope,someone saves her.When she looks at the mysterious stranger that saved her life,she doesn't recognize him and she hasn't seen him before.But the question is...who is he?And how does he know her name?

And then,we have her break up with her three year old boyfriend that after three years has decided that he wants to experience more things.Meaning,he wants to go out with other girls and do what he wants to do.You know what I mean.After two weeks of crying over her relationship,Jackie is forced by her best friend to go back to college and face her problems.But because of those problems,she might fail Econ and so she is introduced to Landon.He is her tutor and they communicate through emails.They form a strange relationship and then,Jackie meets Lucas.But what happens when Jackie is attacked again,Lucas and Landon have many things in common and secrets are revealed?

I seriously didn't want to write a review the minute I read the books because it was the first time I was so confused.Why?Because I didn't know what to think after reading Easy.It definitely was an amazing read but,I feel like it could have been more.I loved the writing style,the plot and of course,the characters.But there were times when I was so excited about what would happen next and I was jumping up and down when Jackie talked to Lucas and stuff like that,but there were times when I was just reading and reading.The book kept my interest for some time and then it was like that interest flew away,to come back again after a while.I know.Complicated.But I think that,the fact that the author kept my interest and when it went away,brought it back is good.Well,as I've said before...Complicated.

If put you that little thing I mentioned before aside,this was an amazing read.That was just what I felt while reading the book.And of course,I wish that there was a sequel but apparently,this is a stand alone.And that's really disappointing.I really want to see what will happen to the characters next.Maybe a great adventure or something?