Hello guys and welcome to a promotional post for Moments Like This by Anna Gomez & Kristoffer Polaha! 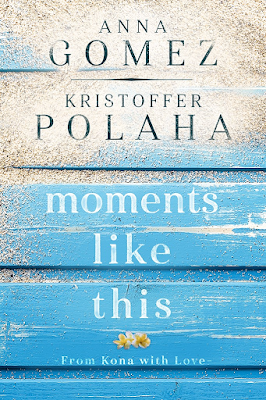 After Andrea “Andie” Matthews chooses her career over a marriage proposal and then loses a promotion she worked so hard for, she jumps at the chance to take a break and help run a friend’s coffee shop.Alone in Hawaii, Andie befriends the staff and quickly grows to care for them, making her determined to revive the company.As luck would have it, she meets the mysterious Warren Yates on Christmas Eve. They share a cup of coffee, some conversation, and even a moment, which leads to many more in the coming weeks.But when Andie learns who Warren really is—and what he actually wants—she is torn between her feelings and his deception.Will Warren be able to win her heart back?
{B&N | Amazon}

I was really interested in reading this one, especially because of the romantic atmosphere the synopsis gave off! If you're looking for something to warm your heart and make you swoon, this book is definitely for you!
Moments Like This follows Andie, whose life is turned upside down when she refuses to marry in order to pursuit her career, but after losing the promotion she's worked hard for, decides to move to Hawaii and help a friend out with managing her coffee shop. There, she meets the mysterious Warren, right on time for Christmas Eve! They get to know each other and something stronger begins to tentatively spread its wings after countless conversations and cups of coffee! A bond forms and things are starting to progress, when Andie finds out the truth about Warren and must decide whether to trust her feelings or give up on him completely!
Andie and Warren just clicked from the beginning and I could feel it while reading! They came across each other at the best and the worst time possible, which I feel like contributed to how things eventually turned out for them! Andie was a great female character, whose development was evident throughout the book. She was ambitious, determined and ready to find herself in the shambles of what could've been. Warren, on the other hand, wasn't as prevalent in terms of personality. His mysterious background overshadowed his willingness to get to know Andie, while exploring the island. They were both likable characters though and managed to face some important obstacles together, without giving up.

The book was told from both Andie and Warren's perspective, which is something I personally enjoyed. I can't stand multiple POVs in Fantasy or any other genre, but when it comes to Romance, I actually prefer it over having the heroine's -in most cases- version of events! I feel like it helps with the world building and sets the characters in a suitable context which makes it easier for the readers to follow, if that makes any sense. Truth be told, it's also a great way to keep things going when it comes to overused tropes and stories that have been told too many times to count.
Granted, Warren's point of view was added into the story towards the last couple of chapters, in order to enhance Andie's and contribute towards a better understanding of the plot, which was a wise decision since the author seemed to focus more on Andie getting away from the toxicity of Chicago and coming to appreciate the beauty of Hawaii and its people! I would've liked an epilogue because the ending felt a bit rushed, but everything was resolved in a natural way that didn't feel forced or unrealistic, so I'm more than okay with that!
Overall, I really enjoyed this one. It was so easy to read and the flow with which it was written, really helped with connecting to the plot and the characters themselves. I would put this in the ''light books'' category, since I chose to read it after something that completely broke me. I knew that it would lift my spirits up, to be completely honest with you, so if you're having a difficult time or if you're looking for something to get your mind off of things, I highly recommend it!

Kristoffer Polaha is best-known for his long starring role in the critically acclaimed series Life Unexpected (The CW). Other TV series credits include Get Shorty with Ray Romano and Chris O’Dowd, the limited series Condor opposite William Hurt and Max Irons, The CW’s Ringer (Sarah Michelle Gellar) and Valentine, as well as North Shore (FOX).
In addition to co-starring with Rainn Wilson in Backstrom (FOX), he had a multi-season role on the acclaimed series Mad Men (AMC) and Castle (ABC). Polaha is also well-known for starring in Hallmark Channel movies such as Dater’s Handbook with Meghan Markle, and the Mystery 101 franchise on Hallmark Movies & Mysteries.
Polaha first received attention for his portrayal of John F. Kennedy, Jr. in the TV movie, America’s Prince: The John F. Kennedy Jr. Story, opposite Portia de Rossi. He has appeared in numerous independent features, including Where Hope Grows, Devil’s Knot (Colin Firth, Reese Witherspoon), and the Tim Tebow film, Run the Race.
Polaha has a featured role opposite Gal Gadot in Wonder Woman 1984 and in Jurassic World: Dominion.
In addition to his work as an actor, producer, and director, Polaha is branching into the book world by co-authoring a new series. He is also involved with several charitable organizations, including being an ambassador for World Vision, a board member for HerArtsInAction, and The Polaha Family Circus Foundation.
Polaha was born in Reno, Nevada, and he is married to actress Julianne Morris. They have three sons.
—
Anna Gomez was born in the city of Makati, Philippines and educated abroad. She met and married her best friend who whisked her away to Chicago over twenty years ago. She is Chief Financial Officer for Leo Burnett Worldwide, a global advertising company founded in 1935. In her capacity, Anna serves on the board of several not-for-profit organizations, namely the Hugh O’Brien Leadership Organization and Girl Scouts of America. She is also the executive sponsor for a number of employee resource groups focused on Diversity and Inclusion.
Under the pen name Christine Brae, Anna has published six novels, has an established fan base, and a dedicated following. Her titles rank in the Top 100 months following their release. Her last three novels, In This Life, Eight Goodbyes, and The Year I Left, have won literary awards and were immediate bestsellers on Amazon, ranking #1 across multiple categories.