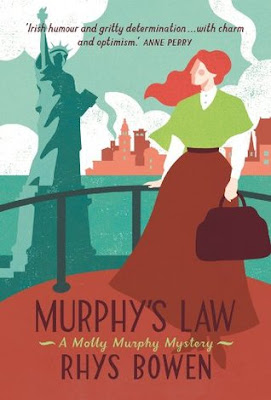 If she can't clear her name, Molly will be sent back to Ireland where the gallows await, so using her Irish charm and sharp wit, she escapes Ellis Island and sets out to find the wily killer on her own. Pounding the notorious streets of Hell's Kitchen and the Lower East Side, Molly undertakes a desperate mission to clear her name before her deadly past comes back to haunt her new future.

To say that I immensely enjoyed Murphy's Law is an understatement, since I devoured it in a day, which hasn't happened in a while. I'm a huge fan of Historical Mysteries and, naturally, I had to get my hands on this particular gem as soon as I discovered its existence. You might be wondering why I gave it a rating of 3-stars since I enjoyed it so much. I would've done the same, if I'm being honest. Well, the answer is quite simple and not as complicated as one might think, considering my knack for pulling apart a book's plot and pointing out what didn't sit well with me. Let me tell you, dear readers, the only thing this particular book lacked, was length. I really felt like we were rushed through an amazing story line that would've had so much more to offer than its -roughly- 240 pages provided us with.

The book is set in 20th century New York, but the main character is actually from Ireland. There's a lot of Irish kind of politics going on throughout the novel, but it's not something I'm really going to discuss in this review. She flees after murdering someone in self-defense and decides to embark on a long journey to New York, in order to escape the fate that's waiting for her in her hometown and decides to pursue the American Dream, like so many others did at the time. After a chance encounter gives her the opportunity she was looking for, she just has to ''fake it to make it'', basically. Before she reaches her destination though, Molly finds herself in yet another scandal, since someone she was seen arguing with ends up murdered. Things get much more complicated from there and since nobody believes that she's innocent, she takes it upon herself to figure out who committed the crime and clear her name.

Murphy's Law, being the first book in a long series, introduced the characters and the setting in a brilliant way, in my opinion. The plot was easy to follow and its flow was achieved with a simplicity that was neither boring, nor unimaginative. It was such a fun and light read, which made it even easier for me to get lost in its pages. The writing style was quite enjoyable and, most importantly, it made sense. In other words, it was consistent, easily understood and nicely structured. The author got the point across without using unnecessary details, which is usually the case with Mystery novels. Vivid imagery and likable characters made up for the lack of depth in some cases, which brings me back to a major complaint that I've already mentioned. I feel like the book was too short and had much more to offer, in terms of plot and character development. But maybe that's a good thing, since the series consists of seventeen books, as of today.

I was invested in the story from the beginning until the end though, which is the only thing you need to take into consideration, in case you plan on reading it! I would definitely recommend it, even though I wasn't too impressed, the story remains intriguing and the characters have an air of mystery that is definitely fascinating! I obviously cannot wait to see what the future holds for Molly Murphy and I'm so glad that I enjoyed it, but didn't love it, because I will go into the rest of the books in the series with a certain open-mindedness that would've otherwise been overshadowed by high expectations! I've also gone into great troubles to find the rest of the series in these particular covers, which has been the most difficult trials I've put myself through these past couple of months. AbeBooks better deliver them soon and in one piece, because it was my first time ordering from them and I've not heard the greatest things about their customer service.

Let's discuss! Have you read Murphy's Law? If yes, make sure to comment down below and let me know what you thought about it!