Elena Reviews: Among the Mad {Maisie Dobbs #6} By Jacqueline Winspear

Title: Among the Mad 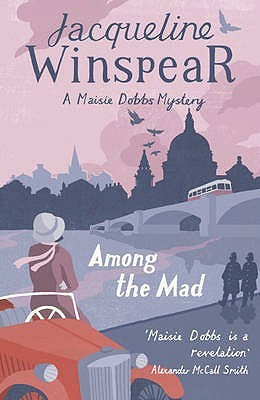 In the thrilling new novel by the 'New York Times' bestselling author of 'An Incomplete Revenge', Maisie Dobbs must catch a madman before he commits murder on an unimaginable scale.

It's Christmas Eve 1931. On the way to see a client, Maisie Dobbs witnesses a man commit suicide on a busy London street. The following day, the prime minister's office receives a letter threatening a massive loss of life if certain demands are not met - and the writer mentions Maisie by name.

After being questioned and cleared by Detective Chief Superintendent Robert MacFarlane of Scotland Yard's elite Special Branch, she is drawn into MacFarlane's personal fiefdom as a special adviser on the case. Meanwhile, Billy Beale, Maisie's trusted assistant, is once again facing tragedy as his wife, who has never recovered from the death of their young daughter, slips further into melancholia's abyss.

Soon Maisie becomes involved in a race against time to find a man who proves he has the knowledge and will to inflict death and destruction on thousands of innocent people. And before this harrowing case is over, Maisie must navigate a darkness not encountered since she was a nurse in wards filled with shell-shocked men.


In 'Among the Mad', Jacqueline Winspear combines a heart-stopping story with a rich evocation of a fascinating period to create her most compelling and satisfying novel yet.

'Forgetting has never been of concern to me, Inspector. It's the remembering that gives me pause.'

Found this little gem in the bargain section and decided to pick it up because I've always been into Historical Mysteries, especially when they follow the lives of strong women who refuse to conform to stupid genre stereotypes and go against what society and, by extension, men, expect from them. In the 1930's, mind you, which is the setting of this novel. Of course, I had no idea that this was the sixth book in a twenty something book series, but whatever. I've already gotten my hands on the first one, even though I think it'd be better from me to pick it up from here and continue on with the seventh book. On the one hand I'd love to experience Maisie Dobbs' story from the beginning and become a witness of how she develops as a character, but on the other hand, it might turn out to be pointless, because I'm already invested in her intriguing personality.

Even though I technically have no idea where Maisie comes from and what she's been through, it was easy enough to pick up some things about her past throughout the novel. It's quite obvious that the war has left its ugly stain on her soul, which is the case for everyone who was directly -or not- affected by it in the first place. I have studied shell shock and hysteria -Literature major here- through poetry, which means that I have a pretty good understanding of what neurosis entails and how it was ''treated'' back when the field of psychology was underappreciated, to say the least. It gained status during WWI, but wasn't widely acknowledged as a scientific field until much later. Which is why I was extremely interested to see how it was portrayed in Among the Mad.

'Now, still staring into the rasping white-hot gas jets, she saw once more the twisted bodies, muscular responses not to physical injure but to mental anguish. She saw the eyes rolled back or staring into the distance, the constant weeping, the uncontrolled reflexes. There were men who cried, those who could not eat, those who would cause themselves injury, as if to feel, physically, the wounds that lay in their souls...'

This description is a very accurate representation of hysteria in soldiers, in my very humble opinion. When it comes to historical writing in general, it's very difficult to create a story that takes place in the past, but is written in the present. It makes it a bit tricky to get the setting right, since you weren't technically there and your work is a mix of imagination and research. But this novel transported me back in time, since everything felt quite realistic and easy to adapt to, in terms of the period it's set in. It did a great job at providing me with a very authentic image of London during the beginning of the 20th century, as well as the socioeconomic barriers society enforced on humanity.

'You could say that. Frankly, it stems from a belief that the lower classes - and that means both of us - do not think and feel in the same way as our betters.'

And, let's not forget the whole gender discrimination aspect, a very prominent part of the series itself, since it follows the adventures of a female investigator who was never supposed to concern herself with fields attributed to men and should've just settled down and found a husband to make babies with instead. Bitter much? Probably.

I really liked Maisie Dobbs. She was a pro at handling demanding situations and arrogant men, which makes her a very prominent woman to look up to and strive to be like, even a century later. Her perseverance and determination throughout the novel made her even more likable as a character. It was clear that she was driven and open minded, without trying to impose her opinions on others. As a character, I could definitely tell that there was a lot of development throughout the series, which I didn't get to experience, but could clearly see in the sixth book. Her way of figuring out the truth was impressive without being complicated, which I really appreciated since it made it very easy for me to follow the story and keep up with the clues. Also, it became very clear, from the beginning, that she wanted to give voice to those that were robbed of it and couldn't be heard by a government that used them and discarded them when they no longer served a purpose.

'I was discarded, not wanted, thrown aside. And soon someone, somewhere, will remember. They will remember me and they will know...'

Another thing I really appreciated was the fact that the perpetrator's perspective made everything even more interesting, since his POV was included as well. I couldn't help but sympathize with him, to be completely honest with you. People abandoning life means that life abandoned them first and they see no point in trying to reclaim what they might've lost. We're all villains in the eyes of someone that feels misrepresented by us and, by extension, society itself, right? I don't want to reveal anything else about the plot, I'm just going to say that the writing was well structured and the story easy to follow. I was invested from the very beginning and my anticipation grew with every twist and turn. Nods of agreement were also a thing while I was reading the book, since the author was on point about many things considering the ways of the world and how it marginalized certain people, while putting others on a pedestal they didn't deserve. I will leave you with one of my favorite quotes of the novel, that reflects on the reality of refusing to view people who are different as human beings, thus reducing them to an ''animal state of being'' and using discourses that refuse to recognize them as anything other than outcasts.

'And the people look away, don't they? We all know when someone isn't quite right, and for the most part it's an element of our nature to want to be out of the way of people who aren't what we consider to be ''normal''.'