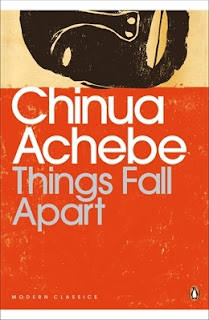 More than two million copies of Things Fall Apart have been sold in the United States since it was first published here in 1959. Worldwide, there are eight million copies in print in fifty different languages. This is Chinua Achebe's masterpiece and it is often compared to the great Greek tragedies, and currently sells more than one hundred thousand copies a year in the United States.

A simple story of a "strong man" whose life is dominated by fear and anger, Things Fall Apart is written with remarkable economy and subtle irony. Uniquely and richly African, at the same time it reveals Achebe's keen awareness of the human qualities common to men of all times and places.

*This is more of an analysis based on academic articles and seminars that I have taken on Post-Colonialism, which is a topic I'm immensely interested in and more than passionate about! I'd love to hear your opinions on the comments section below!

This was one of the assigned novels for my Contemporary English Fiction class and to be more specific, it fell under the study of colonization and its impact on indigenous cultures. I did take an extensive Post Colonialism Literature class during my previous semester and did a whole lot of research on the gendered subaltern for my final essay, which is why I was extremely interested in reading Chinua Achebe's Things Fall Apart.

I'm not really going to get into the plot itself, since you really have to read the book in order to get a sense of what it truly is about. This review is more of an analysis of the book as a significant work of literature, if you will. It is full of contrasts that are described in the most enchanting way and gives readers a glimpse of how indigenous cultures lived through the perspective of someone who is neither a white man nor an Imperial subject. I do understand the irony of using the language of the colonizers to write a novel about the colonized but, at the same time, I do feel like the impact of it is greater than it would've been otherwise. Using western means of superiority, such as language and writing, to write about the civilized tribes of the East, is irony at its best.

The book itself follows a number of clans that were, eventually, colonized by the British. It centers around Umuofia and its champion, who lives by the rules of masculinity, in a patriarchal and traditional context. To be a man and to have honor means to work with your hands and be violent, in order to impose your authority on others. Which, ironically, is the opposite of what the colonizers did to disrupt their reality, at the end of the novel. This comes to show that you can impose your will and values on others by cleverly taking advantage of their weaknesses, instead of actually declaring war on them and acting irrationally. Okonkwo is exiled from his tribe after his impulsive actions cause harm to its members and he goes back years later, to find that it has been infiltrated by missionaries, who are in the process of westernizing it by paying attention to the ''outcasts''. One of them is Okonkwo's son, who does everything he can to make his father proud throughout the novel and prove his masculinity, but his artistic nature prevails and is nurtured by this new ''white religion'' that doesn't judge him negatively for it.

The theme of masculinity mentioned above, is very prevalent in the novel since it's represented by its main character. Okonkwo is portrayed as passionate and violent, which has negative consequences on his life and makes it impossible for him to adapt to the rules of the West and accept the change it's trying to impose. His character becomes the synonym of self destruction, since his impulsive and rush decisions cause him to lose his status and start from the beginning, in order to reclaim it somewhere else. He hates his father for being ''weak'' and not taking care of his family in the traditional sense and is doing everything in his power to prove that he's better, which is the main reason for most of his bad choices. The problem is, though, that he doesn't understand how those bad choices have an impact on the people around him and why that should matter. He's such a complex character and you really need to pay attention to his actions and have they affect the novel itself and how it progresses, in order to understand and appreciate it.

Things Fall Apart was also a very easy book to read, in terms of pace and writing style. It wasn't difficult to get through it at all, which goes to show how important it is for everyone to actually be able to read it and understand what is hidden between the lines. It's full of contradictions that add more to the background of the story itself and provide readers with a glimpse into imperialism's impact on the tradition of the indigenous tribes, as well as their gradual assimilation into the ways of the West. The ending was quite discouraging in terms of meaning, because it paints the bigger picture of colonization and how the history of these tribes will be interpreted by western means of representation. To be more specific and give some context to those of you interested in a more academic reading of the novel, the final chapter is written from a white man's perspective and its final paragraph talks about the inclusion of the events he witnessed in the book he's in the process of writing. Imagine inscribing the vast history of these tribes into a couple of pages that will be written by someone who has no internal knowledge of their tradition and will misrepresent them in order to trivialize their true meaning.

Western discourses of writing have made sure that the Igbo culture and its past will get lost in translation, through the process of trying to historically frame them in a way that won't disrupt the superiority of the west and how it perceives the world, in an imperialistic context. Which goes to show how it has inscribed its own meaning on those it considers to be unworthy of creating their own!