Before putting together this review, I want to wish you all a happy new year! May it be filled with happiness and joy, love and appreciation! And may we all, members of this wonderful book community, keep filling our days with books and the stories they tell us, while travelling to different worlds each day through them! 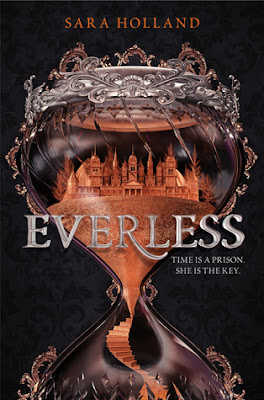 In the kingdom of Sempera, time is currency—extracted from blood, bound to iron, and consumed to add time to one’s own lifespan. The rich aristocracy, like the Gerlings, tax the poor to the hilt, extending their own lives by centuries.

No one resents the Gerlings more than Jules Ember. A decade ago, she and her father were servants at Everless, the Gerlings’ palatial estate, until a fateful accident forced them to flee in the dead of night. When Jules discovers that her father is dying, she knows that she must return to Everless to earn more time for him before she loses him forever.

But going back to Everless brings more danger—and temptation—than Jules could have ever imagined. Soon she’s caught in a tangle of violent secrets and finds her heart torn between two people she thought she’d never see again. Her decisions have the power to change her fate—and the fate of time itself.

Everless has been one of my most anticipated reads since it came out and, even though I got my hands on it later than I would've liked, considering the situations I keep finding myself in where reading is concerned. With that being said, let's move on to the actual review.

I'm not going to say that I had the highest expectations for this one, but I did go into it expecting to enjoy it. Truth be told, I did and, at the same time, I didn't. I know it sounds complicated, but let me explain. The beginning of the novel was great. It did a decent job of introducing me to the characters and the world they lived in fairly quickly and made me want to keep reading. It was interesting, fast paced but not rushed, which is an ideal aspect of reading for me when it comes to Fantasy and quite descriptive. The author managed to create a fascinating setting and, eventually, kind of left it at that.

You might be wondering what went wrong. The answer is fairly simple and, if you've read Everless already, you might even find yourself agreeing with it. The middle part of the story got overwhelmingly repetitive and it felt like the story was stuck in this weird state of limbo that just wouldn't move forward. It kept dragging on and on, which made it quite difficult for me to keep reading. Not saying that having a slow pace which gives detailed descriptions of a book's setting and its characters is a bad thing, but when that is happening right after a series of events that make the reader reach a high level of adrenaline and abruptly bring it to a halt, things can fall on the negative side. It took me such a long time to waddle through it and actually get somewhere. I truly felt like it didn't add much to what could've been a truly phenomenal story. It subtracted so much from the original plot by not adding anything substantial to it and it truly disappointed me. It moved to that predictable territory readers are so tired of encountering in books for an extended period of time and did nothing to redeem itself through anything else.

I feel like the author rolled with the idea of the story without executing it successfully, where its majority is concerned. I did enjoy the ending and wasn't really expecting that shocking plot twist but, it was too little and a bit too late for me. I might pick up the sequel, just to see where the story will go after that major cliffhanger.

When it comes to the main character, Jules, her determination to get to the bottom of things, as well as her courage, were quite admirable. But, her obsession with her childhood crush put an end to the more adventurous aspect of the story and that is where it slowly progressed into that annoying romance trope category we all love to hate. It was quite disappointing actually because, once again, the main character daydreamed of the knight in shining armor coming to rescue her from her troubles. And then, she had her wake up call when she realized that their feelings were not mutual and he has made it a habit of fooling around with naive little girls that allow themselves to be charmed by his riches and status. I'm incredibly tired of coming across this particular trope and feel quite appalled by it. It's getting old and it doesn't reflect on a reality that I can personally relate to, because I could never imagine myself going through it for the sake of something I'm more than aware that I'll never have. I'm writing this down fully aware that Everless is a Fantasy novel but, as readers, we can still relate to it where its characters and their relationships are concerned.

I seriously have no idea whether to recommend this one or not because, I did enjoy some parts of it and disliked some others. It immediately reminded me of In Time, which is why I decided to pick it up in the first place and, unfortunately, it did a poor job of trying to follow its lead. Hopefully though, the sequel will prove to be an improvement and provide more insight to the story itself, as opposed to trying to portray a romantic relationship in a way that does nothing to reflect on its true nature.