Nemesis (n.)
1) An opponent or rival whom a person cannot best or overcome;
2) A person’s undoing;
3) Joshua Templeman. 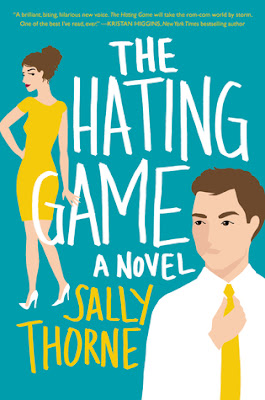 Lucy Hutton and Joshua Templeman hate each other. Not dislike. Not begrudgingly tolerate. Hate. And they have no problem displaying their feelings through a series of ritualistic passive aggressive maneuvers as they sit across from each other, executive assistants to co-CEOs of a publishing company. Lucy can’t understand Joshua’s joyless, uptight, meticulous approach to his job. Joshua is clearly baffled by Lucy’s overly bright clothes, quirkiness, and Pollyanna attitude.


Now up for the same promotion, their battle of wills has come to a head and Lucy refuses to back down when their latest game could cost her her dream job…But the tension between Lucy and Joshua has also reached its boiling point, and Lucy is discovering that maybe she doesn’t hate Joshua. And maybe, he doesn’t hate her either. Or maybe this is just another game.

Truth be told, I had no intention of picking up The Hating Game any time soon. Admitting it is actually an integral part of this review, since I'm encouraging you to do yourselves a favor and pick it up, if you had that same exact thought as soon as you laid your eyes on it! I went through it so fast and immensely enjoyed getting immersed in its wonderful setting from the minute I was introduced to it!

The characters made the plot stand out so much more because, if you had a relatively cliche plot with characters that didn't have anything special to add to it, then that would've definitely been a disappointment. The back and forth between Lucy and Joshua was brilliant without being annoying and unexpected without being repetitive. Lucy was a force to be reckoned with and I immensely enjoyed seeing her character develop throughout the novel, in terms of opening up and letting herself go. She was confident but, at the same time, sensitive, which is often a misunderstood combination, if that makes any sense. She just needed something to spice things up a little and her rivalry with Joshua became the perfect opportunity for her to experience something different and move past the familiarity of her surroundings.

Joshua was incredibly arrogant as a male character, which is usually a quality I'm not really that fond of - both in novels and in real life - but, I absolutely loved his interactions with Lucy and how they had this little game going on. It was obvious that they had the hots for each other but, didn't really know how to express it because of the precarious position they found themselves in. He behaved that way in order to cover up his true feelings, which is something most of us do without realizing it, when we find ourselves in similar situations. It was kind of like a coping mechanism for him, which ended up becoming unbearable and eventually, exploding.

The pace of the story took a while to pick up but, I personally didn't mind it that much since it was still quite entertaining and easy to get through. It didn't affect my reading and I feel like a fast pace in this kind of setting would've ended up being overwhelming, since it wouldn't have felt as relatable. I could easily identify with Lucy, that's for sure, which made the plot itself even more appealing for me! Reading about characters you can actually relate to, even if they belong in a fictional setting, makes the experience of reading even better, which is an opinion I've always stood by and mentioned in reviews!

The writing was also perfectly suited to the way the characters were portrayed, since it gives readers the opportunity to know both of them through Lucy's perspective, which might sound like Joshua is at a disadvantage but, I feel like she paints a fascinating picture of him, better than he would've probably painted for himself. So, even though I would've loved to read the story from his perspective as well, I didn't mind it being told entirely from Lucy's POV because it was both entertaining and enjoyable to read!

Overall, The Hating Game was an amazing read that definitely spiced things up in a cliche way that was made interesting by its plot and characters! I would've loved to see a movie adaptation of it because it's exactly what I would personally enjoy seeing on the big screen, again and again! I cannot recommend its magnificence enough!

Have you guys read The Hating Game? If yes, make sure to comment down below and share your thoughts on it!