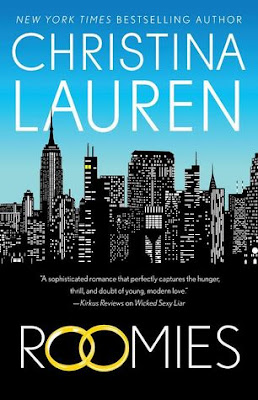 Marriages of convenience are so…inconvenient.


Rescued by Calvin McLoughlin from a would-be subway attacker, Holland Bakker pays the brilliant musician back by pulling some of her errand-girl strings and getting him an audition with a big-time musical director. When the tryout goes better than even Holland could have imagined, Calvin is set for a great entry into Broadway—until he admits his student visa has expired and he’s in the country illegally.

Holland impulsively offers to wed the Irishman to keep him in New York, her growing infatuation a secret only to him. As their relationship evolves from awkward roommates to besotted lovers, Calvin becomes the darling of Broadway. In the middle of the theatrics and the acting-not-acting, what will it take for Holland and Calvin to realise that they both stopped pretending a long time ago?

I actually had no intentions of picking this one up but, came across it at the bookstore and gave up! The premise did sound interesting but, I wasn't really in the mood for this particular Genre at the time and maybe that is why it took me approximately two week to finish it! First time that has happened in a while, which is quite surprising since I'm a fast reader in general. It took me such a long time to get into it and actually manage to connect with the characters. Even though I found the beginning extremely interesting and it definitely made me want to keep reading, I found myself in this weird state of limbo you could say, while trying to finish Roomies. It was too slow for me and I felt like the events were repeating themselves in a way that got tiring eventually and did nothing to keep me invested!

I'm not going to get into the plot too much and we're just going to cover the basics in this review! Holland, the main character, lives a life she's not really proud of and visiting the subway when she doesn't really need to, in order to listen to her favorite busker sing has become a daily occurrence for her. It probably the most interesting part of her life, since she's not really happy with it and makes sure to remind us of more times than it's actually necessary, throughout the novel! That's the thing I found really annoying about her personality, by the way. I can definitely understand having some shitty days and questioning your purpose in life and at the beginning, I really sympathized with her because that is a relatable feeling most of us have had, right? But Holland just kept focusing on how bad her life was and did nothing to make it better, until Calvin showed up. We'll get to that in a moment, don't worry! It was like she kept drugging herself though the mud for no reason, underestimated her abilities all the time and had no motivation to discover what made her truly happy! That is what put me off the most in the novel and I cannot wrap my head around how problematic undermining yourself actually is!

Moving on to the Calvin thing...It's probably the first time I haven't swooned over a fictional hottie who becomes a breakthrough singer/performer before the book is over. I got some negative vibes from him because he basically took advantage of Holland's obsession with him and her desperation to find true love, in order to make his dreams come true. I know that I sound quite insensitive but, that is how he came off to me, from the very beginning of the novel! Everything he did felt insincere and pretentious, since he basically agreed to marry Holland in order to perform on Broadway and lied to her  about well, everything! Their romance had potential, I'm not going to lie. Because the story line was clever and I was quite anxious to see how it would play out in the end but, guess what! I was kind of disappointed. I mean, Holland was basically waiting for Calving in order to regain control of her life and actually start living it to its full potential, which is just ridiculous! That just shows how misconceptions about femininity are born and why we haven't managed to wipe them out yet!

There were some parts that were enjoyable, I'm not going to lie. The premise was promising but, it felt repetitive in a way that wasn't appealing to me as a reader. I don't mind repetitiveness in books, when it's handled correctly and in a way that doesn't make you feel like the story is in fact, being repeated! It was quite a light read, that's for sure and I didn't mind it, most of the time but, I was so underwhelmed by how the story progressed and what eventually happened in the end. I really enjoyed seeing Holland reach her full potential because, better late than never! And they did get their happily ever after, which was kinda overshadowed by the whole drama thing but, overall, it was alright!

I didn't love Roomies but, I didn't hate it either and that is why I rated it with three stars. If you enjoy cheesy Romance novels with no particular plot surrounding their existence, go for it! If you're looking for something more well thought out though, I wouldn't really recommend it! Hope you found this review helpful and not too negative!