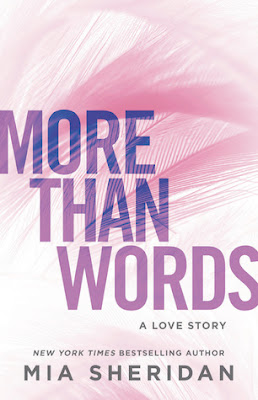 The moment she met Callen Hayes, eleven-year-old Jessica Creswell knew he was a broken prince. Her prince. They became each other's refuge, a safe and magical place far from their troubled lives. Until the day Callen kissed her--Jessica's first real, dreamy kiss—and then disappeared from her life without a word.

Years later, everyone knows who Callen Hayes is. Famous composer. Infamous bad boy. What no one knows is that Callen's music is now locked deep inside, trapped behind his own inner demons. It's only when he withdraws to France to drink his way through the darkness that Callen stumbles into the one person who makes the music return. Jessica. His Jessie. And she still tastes of fresh, sweet innocence . . . even as she sets his blood on fire.

But they don't belong in each other's worlds anymore. There are too many mistakes. Too many secrets. Too many lies. All they have is that instinctive longing, that need—and something that looks dangerously like love.

I was debating on whether to go for an older release by Mia Sheridan or just get my hands on her latest novel, which intrigued me the most. I obviously decided on this one, even though I also wanted to give Archer's Voice a chance, since it's her most acclaimed novel and Ι hear people talking about it all the time. More Than Words follows Callen and Jessica's story, whose fates intertwine when they're very young and meet in a boxcar, at the wrong side of the tracks. None of them has had a happy childhood, Callen's father is an abusive asshole and Jessica's mother has put up with her husband's cheating ways for years, sacrificing her health and her children's well being for a love that was never meant to be. Even though they've both been through hell and back, Jessica and Callen leave their demons behind and go on exhilarating adventures together, until the day Callen disappears without warning or even a goodbye. When they reunite under unexpected circumstances, Jessica has made her dreaming of moving to Paris a reality and Callen has become a famous composer. The book itself is told from both their perspectives, as they meet again years later and try to navigate through their past and decide on their future.

That was an extremely brief synopsis because I seriously could not think of a better way to explain the plot without giving anything away. I'm still not entirely sure whether I enjoyed this novel or not because I found it to be a tiny bit problematic in my eyes and it was nothing that I have't read before or was blown away by. I have to admit that the synopsis did sound quite intriguing and since I was looking for some Romance to get me out of binge reading Fantasy for a bit, it sounded like a good chance for me to just let go and immerse myself in a heartbreaking love story. It definitely was sad and at the same time, beautiful but, I had a lot of trouble connecting with Jessica so, let's start from there. She was an okay character and her development throughout the story was good but nothing major or impressive came from it. She was too submissive for my liking and became a doormat when it came to Callen and every aspect of her life that he affected with his presence. I'm not using the word ''submissive'' in a negative context because it's obviously nothing bad or shameful. I also don't want to come across as being insensitive or even offensive. I just felt like her representation in the novel wasn't the best it could've been because she was painted as a helpless damsel in distress that conformed to a rich boy's whims and forgave his emotional abuse because his happiness was more important than her own. I can definitely understand where the author came from in creating a sensitive and naive character but, she was just too innocent to be considered realistic or even relatable. She was pretty likable and I didn't detest her or anything, it was just hard for me to sympathize with her and place myself in her shoes because I would've never react to situations the way she did throughout the novel. I found her fascination with history quite intriguing though, since I'm also obsessed with it and her ability to make her dreams come true was truly impressive and more than inspiring!

Callen wasn't the greatest character either but, he had some qualities that made me sympathize with him and understand his actions and way of thinking a bit better. His traumatic experiences when he was younger shaped who he eventually became and his narrative was filled with this sort of unconstrained bitterness towards the person who had wronged him, something that made him underestimate the power of the things he had and long for the things he didn't. I enjoyed his perspective a bit more than Jessica's because his change of heart became quite evident in the last couple of chapters and he kind of proved my assumptions wrong, in a good way. He obviously let his struggles define him and it got to the point where he started losing himself completely because he wasn't strong enough to face them. I was glad that Jessica had the power to make him realize that he just wanted to become who he was meant to be and leave behind a life filled with shallowness and pretense to pursue a future with her by his side. Their love story was truly a roller coaster of emotions and even though his behavior was sometimes problematic, I liked the fact that he recognized it and made it his mission to atone for it.

Moving on to the writing, which was also nothing special but, had a satisfying pace that made the story so much easier to read. The world building was kind of mediocre, I'm not going to lie. I wasn't that impressed with the slightly poor use of language that did not meet my expectations as an avid reader and reviewer. My biggest problem though, was the fact that there was no specific background for any of the characters and their pasts were kind of generalized and put aside in favor of the people they became because of them. I'm not opposed to the fact and I strongly believe that it happened for a reason but, I would've liked to know a bit more about where they both came from and what they had done in the years they spent apart from each other.

Since I've tackled the most basic aspects of the story, I really want to express my feelings towards they letters found in a cave that dated back to Joan of Arc's time and Jessica had the fortune of translating for the Louvre. I had forgotten how much I love that particular period in time and I'm more than glad that a novel reminded me of it. I'm not aware of whether the letters truly exist and I'm definitely doing some research after I finish writing this review but, they were truly inspiring and absolutely heartbreaking! They gave such a refreshing insight to a more than significant period in time and completely turned things around for me, concerning the novel's development and how much I came to enjoy it. They were probably the greatest addition to the story itself and my favorite part from it, since they left behind an important message of never ending hope and unwavering faith that never failed those who harbored it deep inside them!

Overall, More Than Words wasn't the amazing novel I was expecting it to be but, it definitely touched something inside me. It managed to affect me with its raw plot and vivid descriptions of a city I've always been in love with. Regardless of the fact that, I wasn't really impressed with Jessica as a main character, I still think that she made the right decision in the end and Callen finally came to realize what truly mattered in his life before it was too late. So, if your're looking for a quick and easy read that will leave you with a sense of a well deserved happily ever after, I would definitely recommend More Than Words. But, I would suggest not going into it with extremely high expectations like I did!