Blog Tour - Kiss of the Royal By Lindsey Duga {Review & US Giveaway!} 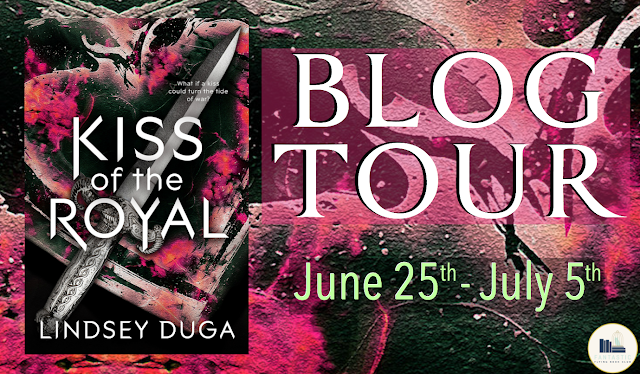 Title: Kiss of the Royal 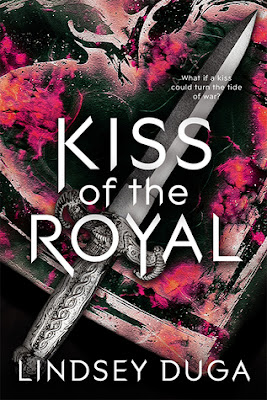 In the war against the Forces of Darkness, the Royals are losing. Princess Ivy is determined to end this centuries-long conflict once and for all, so her new battle partner must succeed where the others failed. Prince Zach’s unparalleled skill with a sword, enhanced by Ivy’s magic Kiss, should make them an unstoppable pair—but try convincing Zach of that.

Prince Zach has spent his life preparing for battle, but he would rather be branded a heretic than use his lips as nothing more than a way to transfer magic. A kiss is a symbol of love, and love is the most powerful weapon they have—but try convincing Ivy of that.

With the fate of their world on the line, the battlefield has become a testing ground, and only one of them can be right. Falling for each other wasn’t part of the plan—but try convincing their hearts of that.

Let me start this review by saying that, Kiss of the Royal reminded me so much of the fairy tales I used to read obsessively - and still do - when I was a child! The setting was just so magical and the descriptions so vivid that, it was like everything was starting to unravel inside my head and what I was reading quickly transformed into moving pictures with shapes and colors I couldn't get enough of. I always try to imagine what I'm reading in my head because my imagination has no limits that I'm aware of but, this time, it was like the experience of reading Kiss of the Royal greatly exceeded previous ones! The world building was also wonderful and even though the story started out a bit slow, it picked up after a while and I got so immersed in it that I actually lost sight of reality for a bit.

I'm not going to go into great detail about the plot itself, I'm just going to tell you that, I've never read anything like it before and neither have you! This novel is the definition of originality and I'm so glad the synopsis made me pick it up because, I don't think I would've chosen to read it otherwise! It did sound a bit weird at the beginning but, weird has always been my favorite thing to explore so, I couldn't wait to get into it and discover its secrets! It was impressively unique and I was left in a state of awe after I got into the plot and actually realized how well though out it was! I was angry at one moment and laughing the next, which just shows that the story managed to actually make me feel things and experience what the characters were feeling right alongside them. I got frustrated at times because of how ridiculous some rules were and just about screamed when I realized that women were basically used by men in all aspects of their lives, to benefit a Kingdom that offered them nothing in exchange. It was such a stark reflection of the reality we live in but, with a Fantasy setting and it proved that you can incorporate problematic aspects of the world we live in to any Genre you choose but, you have to do it right. I definitely feel like Lindsey Duga nailed this aspect of the story because, she wanted it to be problematic and her plot underlined this unacceptable version of humanity none of us would've wanted to live in, even though our reality is close enough to its aspects of fiction. For me, that made the story even more relatable and I really enjoyed that fact that it was neither problematic nor offensive. Everything had a logical explanation and the author did a great job at giving a believable background and leaving no plot holes or question marks behind.

The characters themselves were extremely likable and even though I sometimes got frustrated with Ivy's complete devotion to a Kingdom that only saw her as a commodity, I could definitely understand where she came from! She was loyal and wanted to do what was best for her people, even if it meant putting her life at risk to save those she loved. As the Princess with the most powerful Kiss - the world is written with a capital K throughout the novel by the way, which I think is really interesting and highlights its importance - her duty is to serve in battle and share her magic with the partner chosen for him, because of his compatibility to her own power. When her last Prince is cursed and nothing can be done to save him, severing the bond is the only choice. Now, she has to find a new partner to find alongside with in battle and the chosen one is an outstanding swordsman with an undesirable legacy, that is completely opposed to accepting Ivy's proposition and conforming to the rules it inevitably comes with. Ivy's determination to convince him that together they're going to be invincible proves to be fruitless, since he's more than capable of handling himself without the magic a Kiss from her would provide.

Zach was such an interesting character as well! I loved his rebellious spirit and the fact that he went against the norms of a society that barely accepted him, without caring whether it would have an impact on his status or affect his quality of life. He's strong willed and determined to prove people wrong. As a Romantic, he see the world in a completely different way and Kissing for him is something sacred, not to be taken for granted. I was basically swooning by the end of the novel, because his behavior was so different from what I'm used to in Fantasy novels. The trope of brutal and powerful male characters has become so common nowadays that, straying from it is basically unheard of! I'm very glad Zach made it his mission to redeem that in a way!

Overall, Kiss of the Royal was such an interesting novel and I couldn't get enough of it! I loved the ending and I feel like I got the closure I was looking for! It defied the usual tropes I'm so tired of seeing in Fantasy novels and I couldn't have been happier for deciding to give it a chance! So, I obviously cannot recommend it enough! Make sure that you have an open mind going into it because the premise is definitely peculiar but, it's more than worth reading because of it! It's original, beautiful written and with great plot and character development throughout!

Lindsey Duga is a middle grade and young adult writer with a passion for fantasy, science fiction, and basically any genre that takes you away from the real world. She wrote her first novel in college while she was getting her bachelor’s in Mass Communication from Louisiana State University.

Other than writing and cuddling with her morkie puppy, Delphi, Lindsey loves catching up on the latest superhero TV show and practicing yoga.

a Rafflecopter giveaway
Posted by Book Lady's Reviews at 22:49